Pope: Individual bishops must decide about Communion in mixed marriages 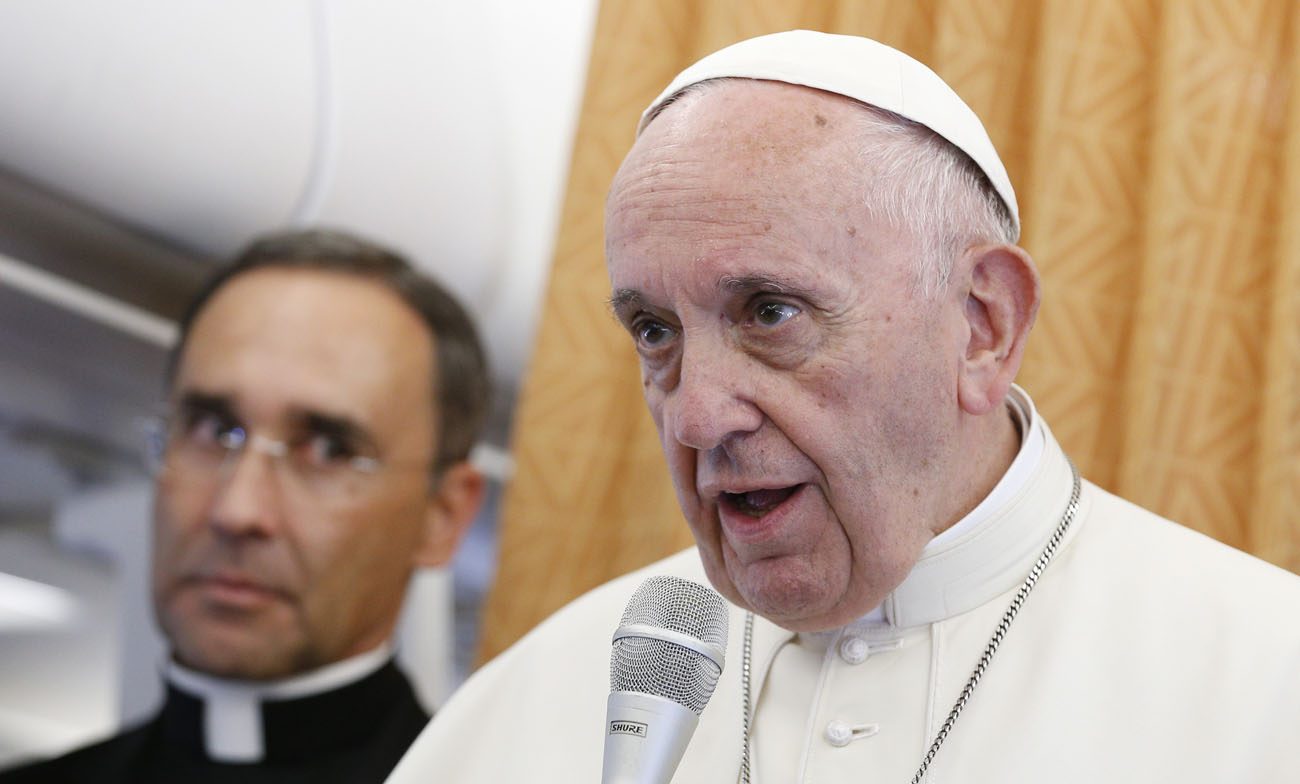 ABOARD THE PAPAL FLIGHT FROM GENEVA (CNS) — The question of allowing Protestants married to Catholics to receive Communion at Mass in special cases has to be decided by each individual bishop and cannot be decided by a bishops’ conference, Pope Francis told reporters after a one-day ecumenical journey to Geneva.

During an inflight news conference June 21, the pope was asked about his recent decision requesting the Catholic bishops’ conference of Germany not publish nationwide guidelines for allowing Communion for such couples.

He said the guidelines went beyond what is foreseen by the Code of Canon law “and there is the problem.” The code does not provide for nationwide policies, he said, but “provides for the bishop of the diocese (to make a decision on each case), not the bishops’ conference.”

“This was the difficulty of the debate. Not the content,” he said.

Cardinal-designate Luis Ladaria, prefect of the Congregation for the Doctrine of the Faith, had written the bishops that “the Holy Father has reached the conclusion that the document has not matured enough to be published.”

Pope Francis expanded on that by saying it will have to be studied more. He said he believed what could be done is an “illustrative” type of document “so that each diocesan bishop could oversee what the Code of Canon Law permits. There was no stepping on the brakes,” he said.

The bishops’ conference can study the issue and offer guidelines that help each bishop handle each individual case, he said.

When asked about countries’ recent reluctance to take in refugees, the pope underlined the basics every nation should provide, “welcoming, accompaniment, (help with) settling in, integrate.”

He added that each government must act with “prudence” and understand how many people it can educate and integrate and help.

In response to another question, the pope said human rights are in a serious state of crisis today, having become relative or unimportant in the eyes of some parts of the world.

Pope Francis said he and leaders of the World Council of Churches discussed this crisis during a private lunch, and one Protestant pastor commented that “perhaps the first human right is the right to have hope.”

The lack of belief in and enthusiasm for basic human rights is a serious concern, he said, and “we have to look for the causes for how we got here — that human rights today are relative, even the right to peace is relative. It is a crisis of human rights.”

Conflicts in the world should not be resolved the way Cain tried, with violence, he said, referring to the biblical story of Cain and Abel. “Resolve them with negotiations, with dialogue, with mediation.”

Recounting remarks he had heard, he said: “If a Third World War is waged, we know what weapons will be used. But if there were to be a fourth, it will be waged with sticks, because humanity will have been destroyed.”