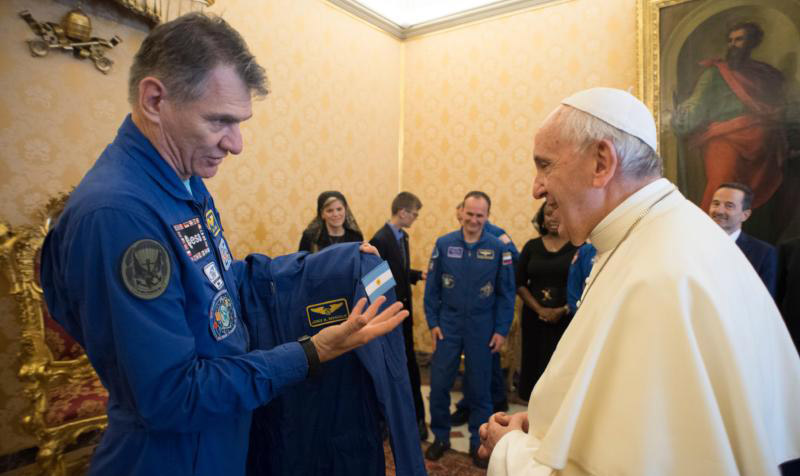 Pope Francis accepts a gift of a flight suit from Italian astronaut Paolo A. Nespoli during a meeting with astronauts from Expedition 53 of the International Space Station at the Vatican June 8. In October the pope spoke via a live link to the astronauts on the space station. (CNS photo/Vatican Media)

VATICAN CITY (CNS) — If Pope Francis ever plans an apostolic trip to space, he’s all set after receiving a custom-made blue flight suit with patches of the Argentine flag, his papal coat of arms and a pair of angel wings with his crew name, Jorge M. Bergoglio.

The outfit also came with add-on white mantle, or short cape, just so there would be no mistaking he was still the pope.

The gifts were presented to the pope June 8 by Italian astronaut Paolo Nespoli and four other astronauts, who returned from the International Space Station in two groups, one in December and one in February.

They had requested an audience with the pope during their post-flight tour of Italy, so they could meet him face-to-face after speaking with him via satellite last October, Bresnik told Catholic News Service.

Recalling that conversation from space, Bresnik, who is a Baptist, said, “It was interesting seeing the Catholics on our crew, the Eastern Orthodox crew members, to see everybody energized by talking with the pope, with what he represents.”

It was wonderful to have been able to tell the pope during the link-up what it was like to see “God’s creation from his perspective and how beautiful and fragile it is,” Bresnik said.

The view of earth from space also shows a world without borders, he said. “There aren’t any clashes. You just see this little tiny atmosphere that is the difference between life and death on this planet.”

“It touches people in their soul, I think. I think nobody comes back without a sense of a higher being. Most come back thinking, ‘Hey, God did an amazing job,” Bresnik said.

When asked if he was surprised so many crew members were people of faith and ask how faith fit into their work in the field of science, he said, “it seems the more we learn about science, the more it strengthens your faith because it shows what we don’t know and how complex it is.”

Bresnik’s son Wyatt, 12, showed reporters his Bible; his father had taken it to space, and Wyatt had the pope sign it during their private audience.

Acaba told CNS he believes the international cooperation necessary on the International Space Station can help humanity in its pursuit of peace.

“There’s always politics going on” back on earth, “but the space station is important to a lot of countries so we all learn to work together to keep that project going,” he said. “I think if we can do that for the space station that is an example of what we can do for other things we find to be important.”