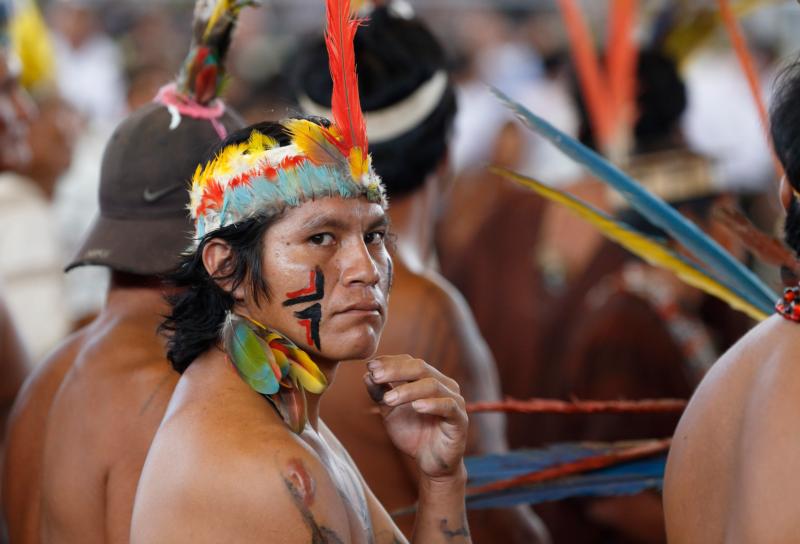 A man attends Pope Francis’ meeting with people of the Amazon in Puerto Maldonado, Peru, Jan. 19. A Synod of Bishops on the Amazon region in 2019 will address pastoral needs of a region with few priests for the number of Catholics. (CNS photo/Paul Haring)

VATICAN CITY (CNS) — The Catholic Church must discover new ways to provide the Eucharist and pastoral support to the people of the Amazon, especially indigenous people threatened by forced displacement and exploitation, a new document said.

The Vatican released the preparatory document for the special Synod of Bishops on the Amazon June 8. The synod gathering in October 2019 will reflect on the theme “Amazonia: New paths for the church and for an integral ecology.”

The connection between care for the environment and the pastoral care of the people who live in the region is highlighted throughout the document, because, it said, “protecting indigenous peoples and their lands represents a fundamental ethical imperative and a basic commitment to human rights.”

“Moreover,” it continued, “it is a moral imperative for the church, consistent with the approach to integral ecology called for by ‘Laudato Si’.”

The document ended with 30 questions about how the church should respond to specific challenges in the region such as injustice, violence and discrimination, particularly against the area’s indigenous people. Responses to the questions will provide material for the synod’s working document.

The questions also sought to identify solutions for a variety of pastoral challenges, particularly the region’s shortage of priests, which means the “impossibility of celebrating the Eucharist frequently in all places.”

The region has experienced significant deforestation, negatively impacting the indigenous populations in the area and leading to a loss of biodiversity.

The document’s preamble states that “new paths for evangelization must be designed for and with the people of God” who live in the Amazon, an area that is in “deep crisis” due to “prolonged human intervention in which a ‘culture of waste’ and an extractivist mentality prevail.”

Using the method of “see, judge and act,” the document began with a description of how the region’s rich biodiversity, which provides food and resources for the indigenous population, “is being threatened by expansive economic interests.”

Those threats include logging, contamination of rivers and lakes due to toxins, oil spills and mining, as well as drug trafficking.

The destruction of the land and pollution of the rivers have forced many people to move. The indigenous people who are forcibly dislocated, the document said, often are met with “an attitude of xenophobia and criminalization” that leads to their exploitation. Women are particularly vulnerable to being trafficked for “sexual and commercial exploitation,” it said.

The preparatory document’s section on promoting “pastoral and ecological conversion” highlighted the need to proclaim the Gospel and to “accompany and share the pain of the Amazonian people and to collaborate in healing their wounds.”

“Today the cry of the Amazonia to the Creator is similar to the cry of God’s people in Egypt,” the document said. “It is a cry of slavery and abandonment, which clamors for freedom and God’s care.”

By focusing on the indigenous people and the care for their land, the church is “strengthened in its opposition to the globalization of indifference and to the unifying logic promoted by the media and by an economic model that often refuses to respect the Amazonian peoples or their territories,” the document’s third section said.

It also emphasized “relaunching the work of the church” in the Amazon region “in order to transform the church’s precariously thin presence” through new ministries that respond “to the objectives of a church with an Amazonian face and a church with a native face.”

This includes, it said, fostering “indigenous and local-born clergy” as well as ministerial roles for women in the church.

“Along these lines, it is necessary to identify the type of official ministry that can be conferred on women, taking into account the central role which women play today in the Amazonian church,” the document said.

Cardinal Lorenzo Baldisseri, general secretary of the Synod of Bishops, told journalists June 8 that although the church has “a magisterium and a discipline that is already established” restricting priestly ordination to men only, the synod offers a space to freely discuss other ministerial roles for women.

“The emphasis on women — that they should have a space in the church — doesn’t come from” the preparatory document, Cardinal Baldisseri said. “We can listen to the pope who said that there must be space for women in the church at all levels.”

The document does not mention the possibility of allowing married “viri probati” — men of proven virtue — to become priests, a question that Pope Francis has expressed a willingness to study.

“We have to study whether ‘viri probati’ are a possibility. We then also need to determine which tasks they could take on, such as in remote communities, for example,” the pope said in a March 2017 interview with German newspaper Die Zeit.

Cardinal Baldisseri told journalists that the synod preparatory document leaves room for discussion on finding solutions to the lack of priests in the area but does not center on “viri probati” as the only answer to the problem.

“I understand the interest but there are many ministries,” the cardinal said. “It isn’t that those that already exist are definite. The church can also have other ministries. Ministries is an ample word that ranges from the ministry of acolyte to the priesthood.”