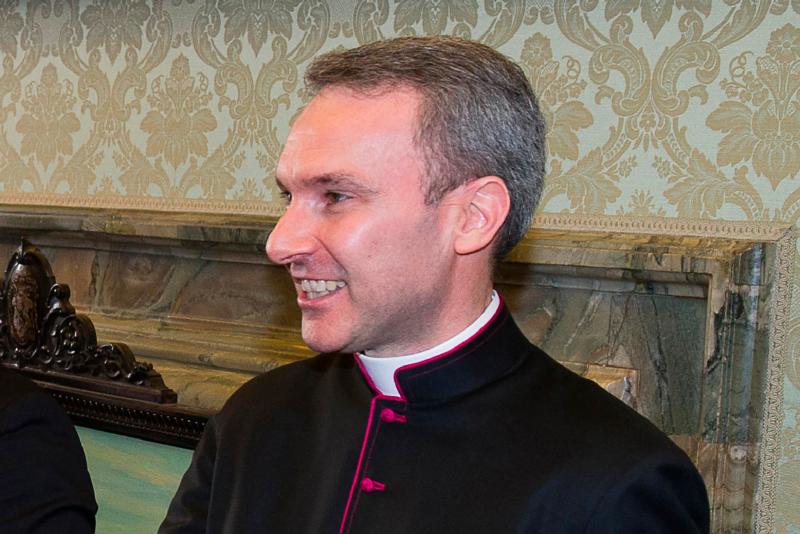 A Vatican court indicted Msgr. Carlo Alberto Capella, a former staff member at the Vatican nunciature in Washington, and ordered him to stand trial beginning June 22 on charges of possessing and distributing child pornography. He is pictured in a 2015 photo at the Vatican. (CNS photo)

Vatican City State’s criminal court issued the indictment June 9, the Vatican press office announced. Msgr. Capella has been held in a jail cell in the Vatican police barracks since April 9.

Msgr. Capella is accused of having and exchanging with others “a large quantity” of child pornography; the quantity is such that the charges are considered “aggravated” by the Vatican City court.

If found guilty, he faces a prison sentence of one year to five years and a fine from 2,500 euro to 50,000 euro (about $3,000-60,000). However, according to Vatican law, “the penalty is increased if a considerable quantity of pornographic material is involved.”

The 50-year-old Italian monsignor had been working in Washington just over a year when he was recalled to the Vatican after the U.S. State Department notified the Holy See Aug. 21 of his possible violation of laws relating to child pornography images.

“The Holy See, following the practice of sovereign states, recalled the priest in question, who is currently in Vatican City,” and opened the investigation, the Vatican press office said Sept. 15.

Then, police in Canada issued a nationwide arrest warrant for Msgr. Capella Sept. 28 on charges of accessing, possessing and distributing child pornography.

“Investigators believe that the offenses occurred while the suspect was visiting a place of worship in Windsor,” the police statement said. A spokesman for the Diocese of London, Ontario, which includes Windsor, confirmed at the time “that it was asked to, and did, assist in an investigation around suspicions involving Msgr. Capella’s possible violations of child pornography laws by using a computer address at a local church.”

Under the same laws promulgated by Pope Francis in 2013, Archbishop Jozef Wesolowski, the former nuncio to the Dominican Republic, was charged in 2015 with the sexual abuse of minors in the Dominican Republic, possession of child pornography, causing serious psychological distress and harm to adolescent victims of sexual abuse and for offending religious and Christian morals with his repeated use of online pornography abroad and on Vatican City State property.

He died in August 2015 before his trial could begin.

NEXT: Pope leads prayers for U.S.-North Korea summit in Singapore