Science and religion are not opponents in a battle 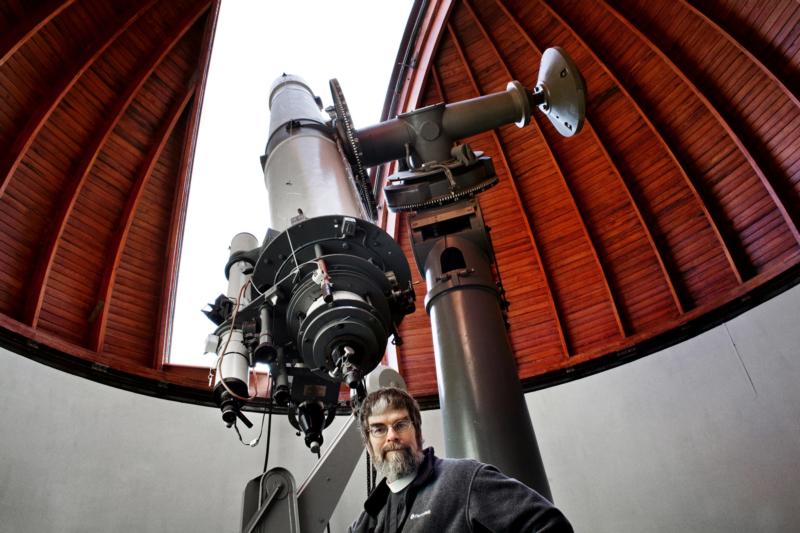 U.S. Jesuit Brother Guy Consolmagno, director of the Vatican Observatory, is pictured at the observatory in Rome. Science and religion are not seen by the church as opposing forces, but distinct and valuable approaches to understanding the universe and our place in it. (CNS photo/Annette Schreyer)

When friends and colleagues find out I work with the Vatican Observatory, their first reaction is often surprise that the Catholic Church supports a scientific research institute, particularly one that studies astronomy. After all, the Catholic Church put Galileo on trial for heresy.

As it turns out, Galileo’s difficulties were more the exception than the rule. The Catholic Church has supported science and scientists throughout her history, beginning with the early Fathers of the Church through to the 21st-century Popes Benedict XVI and Francis.

The Vatican Observatory itself was founded by Pope Leo XIII for exactly this reason, so “that everyone might see clearly that the church and her pastors are not opposed to true and solid science, whether human or divine, but that they embrace it, encourage it and promote it,” as read in the document “Ut Mysticam.”

Many early Catholic saints, including St. Augustine, St. Basil and St. John Chrysostom, encouraged Christians to study the universe as a way to learn about the Creator, often referring to creation as God’s “other book.” St. Anthony the Great, a monk who lived in the desert in the fourth century, said, “My book is the nature of created things, and as often as I have a mind to read the words of God, it is at my hand.”

Many people know that Pope Francis trained as a chemist, but he is not the first scientist to become a pope. At the start of the 11th century, when the first flickers of modern science began to be seen in Europe, the pope was a mathematician and astronomer.

Gerbert of Aurillac, who would become Pope Sylvester II, was sent by his abbot to Barcelona in 967 to study mathematics. Gerbert wrote several popular mathematics textbooks, but it was his calculating device, based on Arabic numerals, that would introduce the decimal system to Europe and set the stage for modern mathematics.

Popes have supported scientists and mathematicians for hundreds of years. In 1748 Pope Benedict XIV read “Foundations of Analysis” by the Italian mathematician (and theologian) Maria Gaetana Agnesi. “Foundations” was one of the first calculus textbooks written and the first mathematics book by a woman in Europe.

Pope Benedict XIV was so impressed by Agnesi’s work that he appointed her to the faculty at the University of Bologna. The first woman professor of physics in Europe, Laura Bassi, was also a protege of Pope Benedict XIV, who asked her to join his elite circle of scholars, the Benedettini.

The religious orders have nurtured scientists and their work for more than a thousand years. Among the scientific writings of 12th-century Benedictine abbess St. Hildegard of Bingen are a catalog of the local plants and animals, and a primitive theory of evolution. In 1979, St. John Paul II called her a “a light for her people and time,” and in 2012, Pope Benedict XVI added her to the church’s formal list of saints and recognized her as one of the 36 doctors of the church, for both her spiritual and scientific insights.

Gregor Mendel, known as the father of genetics, was an Augustinian monk. Mathematician and Sister of Mercy Mary Celine Fasenmyer’s doctoral thesis made possible key discoveries in computer science.

The priests and brothers of the Society of Jesus have produced scores of scientists, from Father Jean Leurechon who in 1626 published one of the first descriptions of a thermometer to astronomer Father Angelo Secchi who in the middle of the 19th century developed the first classification systems for stars. Present-day Jesuit scientists include physicists Father Cyril Opeil at Boston College who explores the fundamental properties of matter and Brother Robert Macke of the Vatican Observatory who studies meteorites.

Faithful Catholic lay men and women have also made many major contributions to science, and many see their work as rooted in their faith. Henri Bequerel, who won the 1903 Nobel Prize in physics for his discovery of radioactivity, was remembered at his funeral as a man who found God “on the very highway of science” as well as in the simple prayers of his childhood.

Andre-Marie Ampere, who made fundamental discoveries about electricity and magnetism, would startle his roommate by crying, “How great is God, and how little is our knowledge!”

Science and religion are not seen by the church as opposing forces, but distinct and valuable approaches to understanding the universe and our place in it. Each has something to offer the other.

St. John Paul II observed in a 1988 letter to Jesuit Father George Coyne, then the director of the Vatican Observatory, “Science can purify religion from error and superstition; religion can purify science from idolatry and false absolutes.”

The church also recognizes the common thread that unites faith and science, the search for truth. Addressing the world’s scientists on this shared vocation at the closing of the Second Vatican Council Pope Paul VI noted, “Your road is ours. Your paths are never foreign to ours. We are the friends of your vocation as searchers, companions in your fatigues, admirers of your successes and, if necessary, consolers in your discouragement and your failures.”

The universe is a wonderful mystery we are called by our Creator to explore with delight — whether we are scientists or not.

PREVIOUS: What are Catholics’ opinions about faith and science?

NEXT: The relationship between science and faith