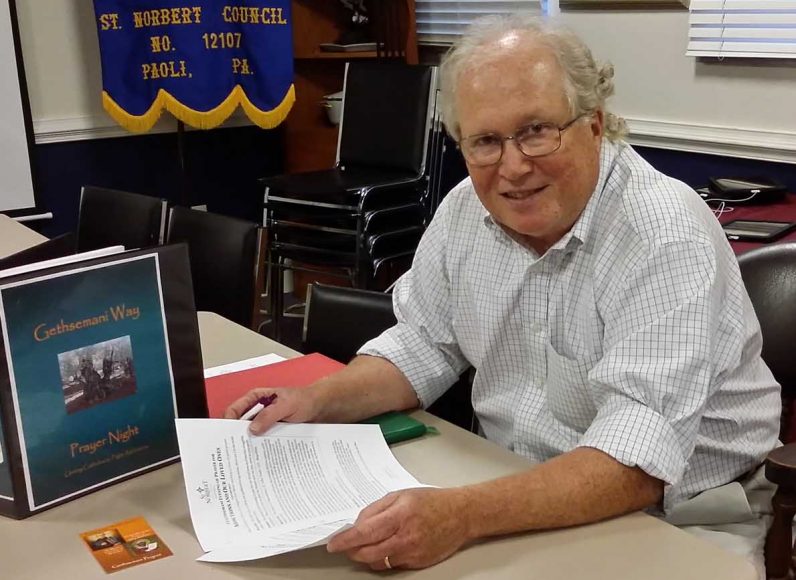 Mark Christmyer of St. Norbert Parish in Paoli developed Gethsemani Way Ministry for Addictions in the absence of a Catholic recovery program. (Photo by Gina Christian)

More than 30 participants from several states attended the day-and-a-half session, which explored addiction recovery through the sacraments and small group discussions.

The retreat, with its theme “From Defiance to Reliance: Navigating the Challenges of Addiction through Prayer and Action,” was hosted by Gethsemani Way, a lay ministry that provides spiritual support to those suffering from addiction. Based at St. Norbert Parish in Paoli, Gethsemani emphasizes prayer, faith sharing and the reception of the sacraments as a means to healing.

“Addiction affects virtually every single parish,” said founder and CEO Mark Christmyer. “The time is right now to help our pastors in providing, as Pope Francis says, a ‘field hospital.’”

Christmyer, the communications director for St. Norbert’s, created the outreach after his own son battled abuse. Frustrated by the lack of Catholic-based resources for addressing addiction, he partnered with Marty K., a longtime leader of 12-step support groups, to develop a program that filled the gap.

“God’s grace is like a waterfall — rich, plentiful and more than enough to satiate the most thirsty of souls,” said K., who led the retreat. “And each of us is a cup, and all we need to do is place that cup under the waterfall, and then give that overflowing cup away to others in need.”

“If our cup is full of self-loathing, doubt, anger, resentment, self-righteous indignation or pride, there is no available capacity for receiving the Lord’s unmerited gifts,” he said. “We must learn to ask God for help in emptying ourselves out.”

While perspectives on addiction are often polarized — some regard it as a strictly moral failing, while others cite genetic and neurological causes — the retreat participants were encouraged to consider addiction as a more complex phenomenon.

“It’s an emotional, physical and spiritual disease,” said Father William Dean, an archdiocesan priest who spoke and served as chaplain at the retreat, which included confession, eucharistic adoration and Mass.

Read CatholicPhilly.com’s award-winning six-part series on “The Opioid Epidemic: A Catholic Perspective,”  which includes a feature article on Gethsemani Way.

Highlighting addiction’s effects on families and communities, Father Dean challenged attendees to engage their faith and move “from cosmetic religiosity to cardiac spirituality.” He cited Lamentations 3:17-24 as a Scripture passage that captures the darkness of addiction while urging those in its grip to hope in the Lord, whose mercy is “renewed each morning.”

Participants were also invited to consider the underlying causes of addiction, rather than seeing it simply as an issue unto itself.

“At the heart of every addict is a wound that needs to be healed,” said speaker Anne Costa, an author and radio host who herself has confronted addiction. “You have a choice on how you are going to be fulfilled: God, or the world? You have to release and let go, let God.”

Costa also stressed the importance of forgiveness in the recovery process, which enables both those suffering from addiction and their loved ones to rebuild their lives. Acknowledging the fear that can prevent reconciliation, she advised at attendees to “use prayer as the antidote.”

Participants described the retreat as both intense and comforting.

“It was a time to rest and be fed by the Holy Spirit,” said one.

Another attendee felt she had been providentially guided to the gathering.

“One day I received a text about this retreat, and I don’t know where it came from,” she said of the message, which became known as the “text from God” among the participants. “It came at the exactly right time. I really needed it.”

As thousands in the area continue to struggle with addiction and its wide-ranging effects, Christmyer and others throughout the archdiocese are working to enhance the church’s response.

The archdiocesan Office for the New Evangelization has created a web page called “Hope in Christ: Spiritual Support for Addiction,” which lists a number of resources such as groups, articles and testimonies. Gethsemani Way is included, along with Our House Ministries, an outreach founded by Father Douglas McKay that provides intensive sacramental support and a limited number of recovery homes.

Christmyer sees all these efforts as central to the church’s mission.

A movement is gaining momentum within the archdiocese to create a Catholic residential treatment center for addictions. For more information, contact Father Douglas McKay at 215-327-3236 or Mark Christmyer at mark.gethsemani@gmail.com.

NEXT: Nun-physician has spent much of her life educating young people about NFP