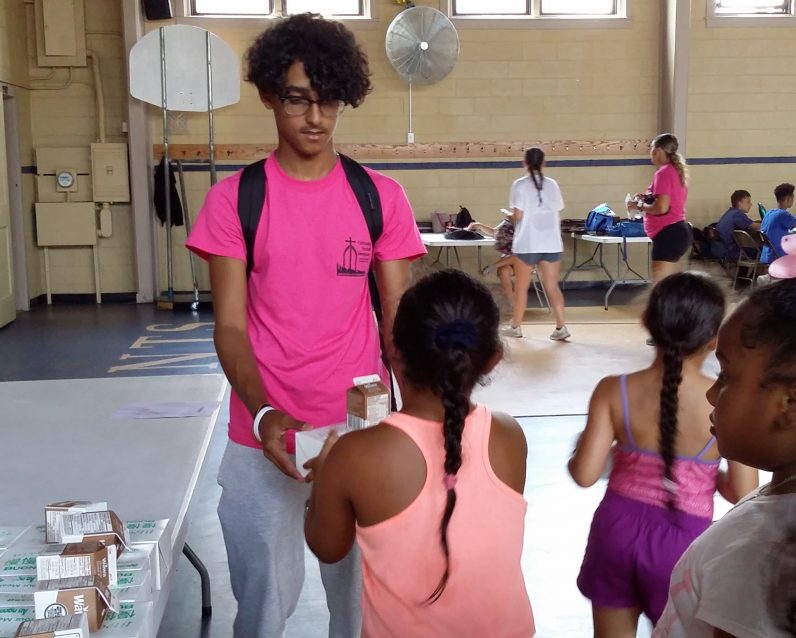 Nabil Alattia distributes lunch during an archdiocesan Catholic Social Services (CSS) summer camp at Holy Innocents Parish on July 17. Now 14, Alattia attended the camp as a child and joined the staff through a work partnership between CSS and the Philadelphia Youth Network. (Photo by Gina Christian)

“I was very shy,” he said. “I did not want to talk to anybody. I even used to stutter a lot out of nervousness.”

Now 14, Alattia is working as an aide at that same camp, located at CSS’s Out of School Time (OST) site at Holy Innocents Parish in Philadelphia. Funded through several government and private partnerships, the 12 OST sites serve between 700 and 900 students per year throughout the city.

In the camp aide position — his first job ever — Alattia spends 20 hours per week at the summer day program, supporting counselors as they provide fun and focused activities for 180 elementary school kids.

As he deftly hands out boxed lunches and calms tiny tantrums, Alattia seems anything but shy. Poised and articulate, he sought out the summer position directly, according to Dee D’Aulerio, administrator of OST’s Holy Innocents site.

When Alattia approached her about joining the camp’s staff, D’Aulerio informed him that he could become a paid assistant through WorkReady Philadelphia, an initiative that connects teens and young adults with area employment opportunities.

Managed by the Philadelphia Youth Network, the program has a summer-only component that matches participants with a six-week paid position. CSS has partnered with the program for almost a decade, offering positions to more than 600 youth in that time. This summer, CSS has 55 teens working at 11 of its sites.

As part of the program, CSS follows up with participants to make sure they’re getting more than just a paycheck.

“It includes an educational component, and students meet weekly as a group,” said Jo Nicole Bradley, who directs the OST program at John W. Hallahan Catholic Girls High School. “They share, ask questions and learn some of the focus topics to help them in any future positions.”

Bradley herself is a graduate of the program, and described her current position as “a full circle.”

“My first work experience was through this program,” she said. “It had a large impact on helping me stay motivated in my life.”

Building confidence for college and career success is a key objective of the WorkReady initiative. At the same time, Alattia credits the OST center’s many programs for his transformation from skittish to self-assured. During his time as a camper, he completed several project-based learning activities, which required participants to accomplish tasks and solve problems by working in teams.

“We got to use our minds and think outside the box,” he said.

Alattia also benefited from OST’s “Strengthening Families” seminars, which foster positive and protective parenting strategies. During the three-month program, families gather at the OST sites for dinner and discussions about common issues in family life. After breaking into parent and child groups, participants reunite at the end of each session to share their insights.

“Nabil and his mom thanked the Strengthening Families program for the change not only in him, but their family. They said it saved him,” said D’Aulerio. “Now he’s thriving – thriving in school, thriving in camp, thriving as a youth worker.”

Alattia, who will attend Swenson Arts and Technology High School in the fall, enjoys interacting as a co-worker with his former camp counselors, who remember his earlier difficulties in adjusting to the program.

“When he first started camp, he was sometimes a little bugger,” laughed Debbie Crawford, a group leader.

“Now he’s a role model,” added Bridget Pastor, a group supervisor. “It’s fantastic to see him take what he’s learned growing up, and bring it to the other side.”

The analytical and communications skills Alattia acquired serve him well when he’s consoling a cranky camper on a hot day.

“We’ve all been there at one point,” he said. “If a kid has a meltdown, you just keep collected, ask what happened, let him calm down and get back to himself.”

Alattia said it’s “rewarding” to take home his first paychecks. He plans to put both his income and his work experience to use in September during his freshman year at Swenson Arts and Technology High School in Philadelphia. A racing enthusiast, he enjoys automotive engineering and eventually plans to enter the field of professional motorsports.

“Now I’ve built confidence, and I know that some things succeed, some fail,” he said. “If something fails, just go back at it. When that situation comes, I’ll know how to handle it.”