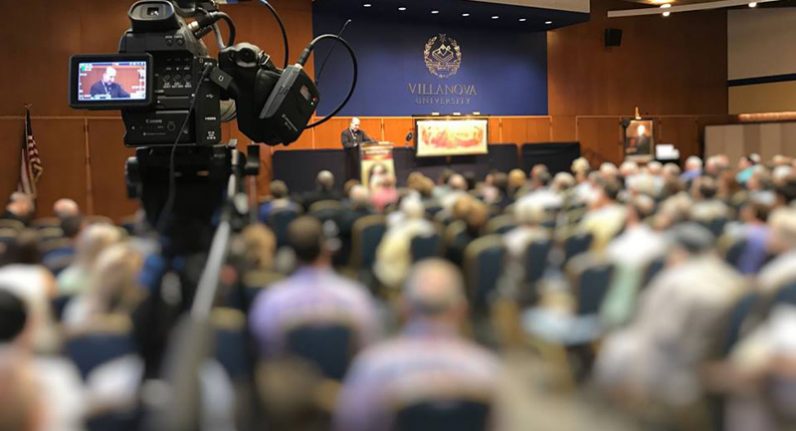 A speaker addresses some of the 450 participants at Villanova University for the annual Courage International conference, an organization for persons with same-sex attraction who wish to lead chaste lives.

The annual conference for Courage International, a Catholic apostolate for persons with same-sex attraction who wish to lead chaste lives, had special meaning this year. It marked the 100th anniversary of the birth of its founding executive director, the late Father John Harvey (1918-2010) an Oblate of St. Francis De Sales who led the group from its beginnings in 1980 until his retirement in 2008.

This year’s conference, held July 12-14 at Villanova University, drew approximately 450 men and women including members of EnCourage, a companion program for relatives of persons with same-sex attraction.

Father Bochanski is a Philadelphia priest who has been released by Archbishop Charles Chaput in order to devote full time to this ministry that is headquartered in Norwalk, Conn.

At this point Courage, which was founded by New York Cardinal Terence Cook, has chapters in two-thirds of the dioceses in the United States, according to Father Bochanski, as well as in Canada, Mexico and a dozen other countries.

He explained the five goals of Courage: to live chaste lives in accordance with Roman Catholic teaching; to grow in dedication to Christ; to foster a spirit of fellowship; to encourage one another in forming and sustaining the friendships that are necessary in a chaste Christian life; and to live lives that give good example. 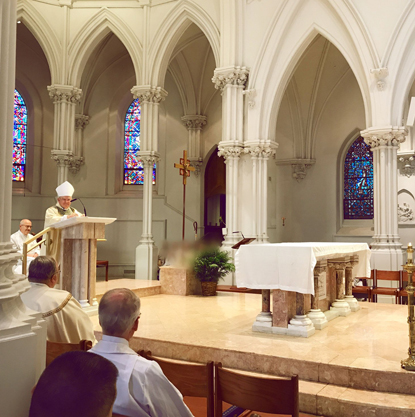 Archbishop Charles J. Chaput preaches at a Mass he celebrated during the July 12-14 Courage conference at Villanova University’s St. Thomas of Villanova Chapel.

Because this year’s conference had a special focus on the ministry of Father Harvey, there was a stronger ecclesiastical and clerical presence this year in the program than usual. Masses were celebrated by Philadelphia’s Archbishop Charles Chaput, Auxiliary Bishop of Philadelphia Michael Fitzgerald, Bishop of Tulsa David Konderla and Bishop of El Paso Mark Seitz.

Father Christopher Rogers, the pastor of St. Patrick Parish in Kennett Square and the chaplain for the Philadelphia Chapter of Courage, gave a presentation on “Charity and Clarity: Enduring Fruit of Spiritual Direction.”

Courage is not simply for men, and Johnnette Benkovic, the founder of Women of Hope, spoke on the topic, “Women Living Hope.”

Sister Sheila Galligan, I.H.M., a professor of theology at Immaculata University, chose a scriptural topic, “The Wow and the Woe of the Psalms.”

A veteran of past Courage conferences, she said the group is growing and growing. She does lament Courage is often misunderstood, even in the church.

“It’s a call to goodness and it is beautiful,” she said. “It is a call to friendship.”

That lesson isn’t just for people with same-sex attraction, she believes.

“In college I find people don’t know how to form relationships with people of the opposite sex,” she said. “It’s a theology of friendship and you can have friendships in the same sex, but just eliminate the physical.”

Karl, who has been a member of the Philadelphia Chapter of Courage for the past 10 years, believes it is important because “for those of us who wish to live in accordance with church teaching, it is essential to get good leadership while having opportunities for service and fellowship,” he said.

Through the annual conference, “I am always excited to hear what other groups are doing in their dioceses to raise the profile of Courage and to share with fellow Catholics the authentic church teaching on the issue of same-sex attraction, that being, we are all as welcome as any other member of the parish.”

At the conference, having “opportunities for daily Mass and adoration, confession and fellowship with hundreds of others is always a reason for great joy,” Karl said.

For more information on Courage International or EnCourage, visit couragerc.org or in Philadelphia call 215-587-4505.

NEXT: Once-shy camper grows into teen role model, thanks to Catholic camp