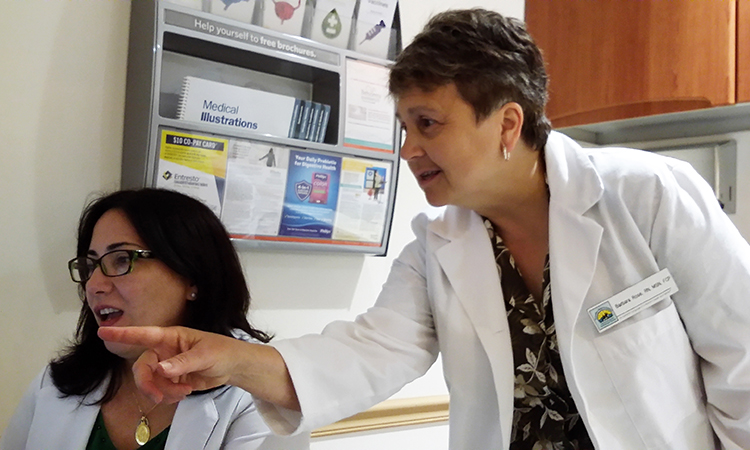 As a nursing student at Syracuse University, Barbara Rose had to study contraception so that she could instruct women in its use — something her deeply held Catholic faith wouldn’t let her do.

Distressed, she consulted her campus chaplain, whose advice was blunt.

“He counseled me to learn what I had to just to get through the program,” Rose said. “And then he said, ‘Don’t go into women’s health.’”

Rose — now an experienced nurse practitioner with several specializations — gladly defied her chaplain’s advice in May 2018 when she helped to open the Gianna Center of Philadelphia, a women’s health care clinic.

Located in the Mercado Medical Practice at Jeanes Hospital in Northeast Philadelphia, the center offers general gynecological care that conforms to Catholic teaching on sexuality and procreation.

“We have a health care crisis,” said Dr. Delia Larrauri, an obstetrician and gynecologist on staff at the center. “Women have been pushed to contraceptives not only for reproductive concerns, but for common problems in gynecology, like irregular or painful periods and abnormal bleeding. Contraceptives don’t deal with the root of the problem; they have many undesirable effects, and they distort the meaning of sex.”

The Philadelphia Gianna Center is an affiliate of the National Gianna Center for Women’s Health and Fertility, a non-profit women’s health care initiative that provides natural and ethical options in reproductive and fertility care.

Founded in 2009, the center takes its name from St. Gianna Beretta Molla, the 20th-century Italian pediatrician canonized by St. John Paul II for her heroic commitment to the unborn. When a uterine fibroma developed during her fourth pregnancy, Molla instructed physicians to save her child’s life, even at the expense of her own. After a successful delivery via Caesarean section, Molla died of septic peritonitis.

Sponsored by the Diocese of Metuchen, the National Gianna Center is based in New Brunswick, New Jersey, where it operates under the auspices of Saint Peter’s Healthcare System. The Philadelphia site is the eighth Gianna Center to open in the U.S. but a more dramatic expansion is planned, according to co-founder Dr. Anne Nolte, who works at the center’s flagship location in New York City.

On the center’s website, Nolte recently announced that the non-profit’s goal is “to have a Gianna Center at the service of every diocese by the year 2023,” which marks the 50th anniversary of Roe v. Wade, the 1973 U.S. Supreme Court decision that legalized abortion.

Treatment is provided in a manner consistent with the U.S. bishops’ Ethical and Religious Directives for Catholic Health Care Services, the sixth edition of which was released in June 2018.

According to the Gianna Center, CrMS allows 98 percent of normally fertile couples to achieve a pregnancy within six months. The method is 99.5 percent effective in avoiding pregnancy.

Cervical mucus methods (CMM) such as CrMS are one of three categories of natural family planning (NFP) recognized by the U.S. bishops. The other two are sympto-thermal methods (STM), which measure basal body temperature as well as cervical mucus; and sympto-hormonal methods (SHM), which use an ovulation predictor kit to detect reproductive hormones in the urine.

Nolte was drawn to CrMS and NaPro while studying at Jefferson (now Sidney Kimmel) Medical College in Philadelphia. Along with her biology and anatomy texts, Nolte read “Humanae Vitae,” Pope Paul VI’s encyclical on procreation and the regulation of birth, and found herself “deeply influenced.” 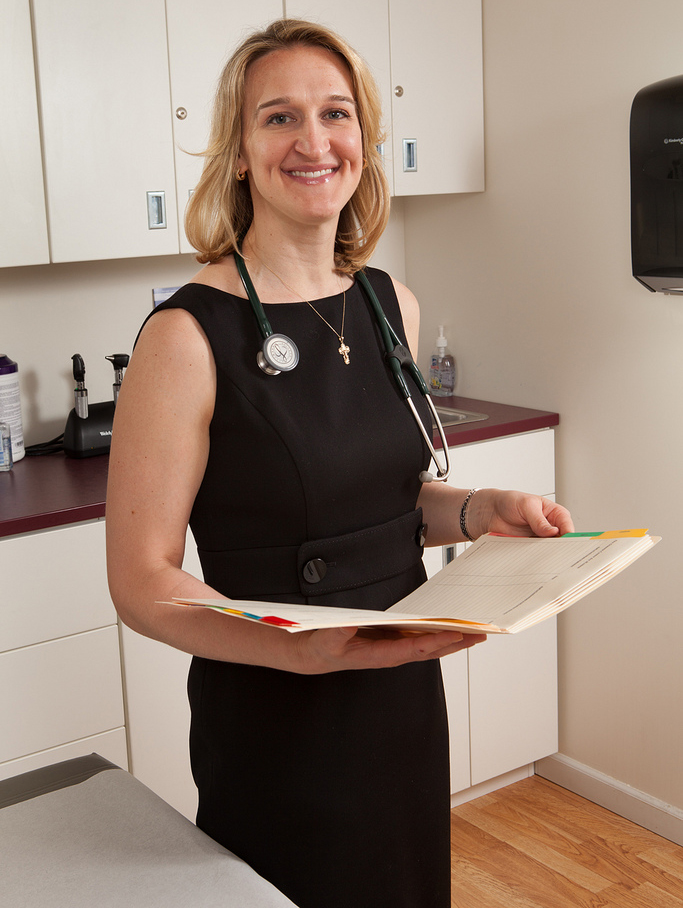 “Pope Paul VI called upon Christian doctors to become experts in the field of the natural regulation of birth,” she said. “I really experienced that as a moral responsibility – to become an expert so that I could help couples.”

In the course of her research, Nolte met Rose, who introduced her to CrMS and NaPro. A longtime NFP instructor in the Philadelphia Archdiocese, Rose became certified in both technologies after several disappointing experiences at the doctor’s office.

“I realized there was no authentic Catholic health care,” she said. “After six weeks of post-partum, doctors want to push the pill on you. When you’re first pregnant, they ask, ‘Are you going to continue this pregnancy?’ I was shocked.”

Rose traveled to Omaha, Nebraska to train at the Pope Paul VI Institute for the Study of Human Reproduction. Founded and directed by Dr. Thomas Hilgers, the institute promotes research and education that support Catholic teaching on reproductive health care. A clinical professor in obstetrics and gynecology at Creighton University, Hilgers spearheaded the development of CrMS and NaPro.

Toward holistic care, away from ‘rhythm method’

Spreading the message can be a challenge, especially since many Catholics — 45 percent, according to a 2016 Pew Research Center study — view contraception as morally acceptable. Another 42 percent do not regard it as a moral issue at all.

Frustration with the “rhythm method,” a basic means of calculating ovulation, has also stymied NFP advocates.

Nolte admits that the rhythm method can be ineffective, since most women don’t have regular cyles. Over the last 50 years, she said, research has more accurately identified the “window of fertility.”

NFP requires couples to commit themselves to the method and to their sexuality — as it should, said Nolte.

“There’s a discipline involved that actually deepens the whole of their married love,” she said.

Listen to our podcast on ‘Humanae Vitae’ featuring Steve Bozza, director of the Archdiocese of Philadelphia’s Office for Life and Family.

Larrauri observed that CrMS and NaPro also represent a more holistic form of health care, while contraceptives — which work by using hormones to suppress ovulation and alter cervical mucus — derive from a “mechanical” view of the body.

“In my opinion, physicians are being mostly trained just to deal with the specific body part that’s affected — but not with the whole person, not with the soul,” said Larrauri, who had previously prescribed contraceptives before embracing church teaching.

Contraception is often broadly promoted as an option for impoverished and marginalized women, added Larrauri, who has focused on serving low-income and immigrant populations.

“Women without insurance end up going to Planned Parenthood, which is strongly biased toward contraception and abortion,” she said. “I also feel as a doctor to non-English speaker patients that many of them do not really understand why they are on these treatments.”

For that reason, the Gianna Centers make their services available to all women, regardless of insurance coverage or religious belief. The centers are actively cultivating long-term benefactors to support their mission.

For donors, patients and insurers, the investment is cost-effective, said Rose.

“We’re finding the underlying cause of their infertility,” she said. “And once we fix that problem, they get pregnant naturally.”

Larrauri pointed out that the average cost of in vitro fertilization (IVF) ranges from $10,000 to $15,000 per cycle, and carries increased risks for breast, uterine and ovarian cancer. Per baby conceived, NaPro spares an average of seven human embryos that would be created and ultimately destroyed through IVF, while saving $50,000 to $100,000 per pregnancy. The natural method also has a lower rate of preterm birth — 7 percent for NaPro compared with 39 percent for IVF.

“This approach is focused on educating a woman about her body and empowering her to understand what is going on with her reproductive system,” she said.

Larrauri added that the methods serve the principles of medicine as a whole.

“Pope Paul VI was so right,” she said. “Only if you have a real, loving knowledge of humankind and the person can you really practice medicine in the right way.”

Inside CatholicPhilly.com: ‘Humanae Vitae’ at 50 years

Reflections on ‘Humanae Vitae’ at 50 years

The legacy of ‘Humanae Vitae’ at 50 years

NEXT: St. Katharine Drexel’s tomb will move to Phila. cathedral