At Texas center, bishops join in a warm welcome for recent arrivals 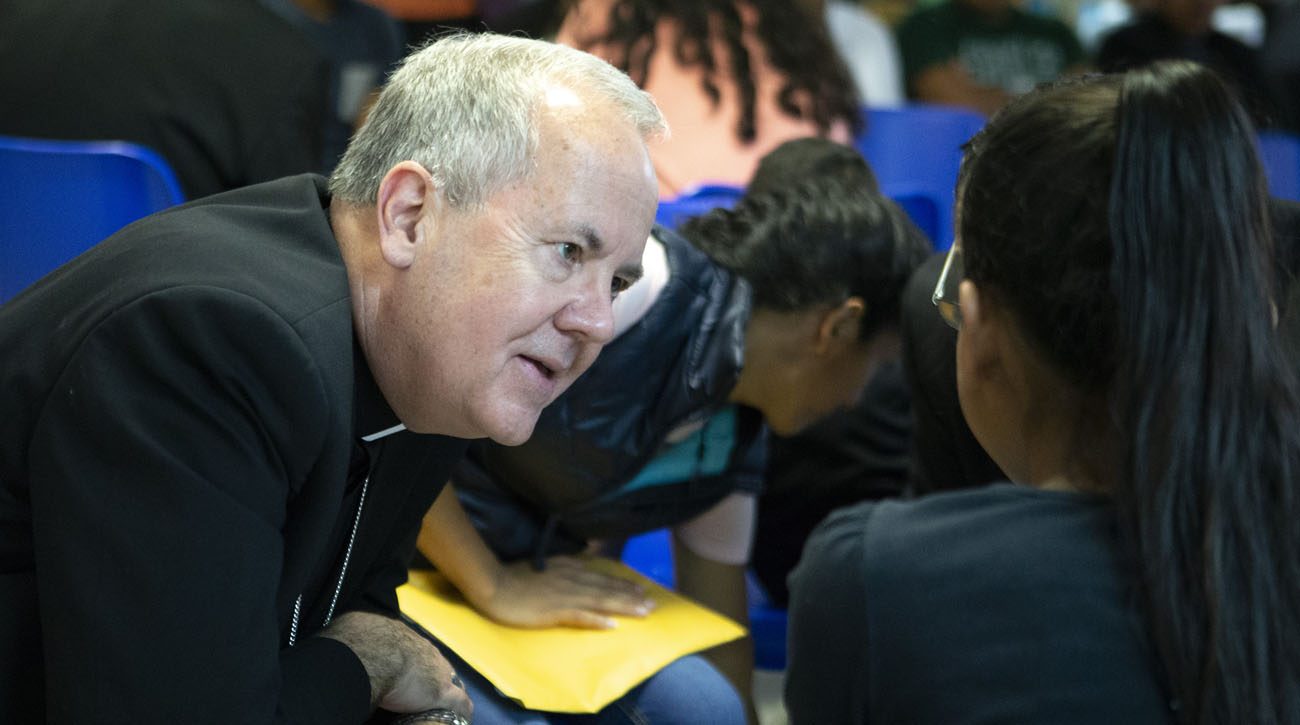 Bishop Joseph C. Bambera of Scranton, Pa., talks to an immigrant woman, recently released from U.S. custody, July 1, at a Catholic Charities-run respite center in McAllen, Texas. A delegation of U.S. bishops has traveled to the Diocese of Brownsville, Texas, to learn more about the detention of Central American immigrants at the U.S.-Mexican border. (CNS photo/Chaz Muth)

MCALLEN, Texas (CNS) — Some had been on the road for weeks, others for days, and some entered looking haggard and sunburned with little more than the clothes they were wearing, some holding the hands of their children as a group of Catholic bishops joined a chorus of hands applauding in welcome.

Sister Norma Pimentel, a member of the Missionaries of Jesus, who is executive director of Catholic Charities of the Rio Grande Valley, asked the bishops visiting the center during the arrival of the recent immigrants July 1 if they could help serve food to the children, whose eyes lit up when they saw fruit or soup and the smiling faces of volunteers replenishing their dishes and asking questions.

“Does the soup taste good?” Bishop Daniel E. Flores of Brownsville asked in Spanish, as some children shyly nodded toward the prelate.

Nearby, the president of the U.S. Conference of Catholic Bishops, Cardinal Daniel N. DiNardo of Galveston-Houston carried a tray with bowls of soup into the room filled with children’s voices. Cardinal DiNardo was leading the delegation of bishops toward the border communities in the Brownsville-McAllen area close to the southern border with Mexico July 1 and 2.

The visit to what’s known as the respite center run by Catholic Charities in downtown McAllen quickly took the prelates into the heart of the human drama of migration and its human toll.

A woman traveling with a 3-year-old said that along the way she’d heard children were being taken away from parents and she prayed that it wouldn’t happen to her because returning to her home country of Guatemala was not an option — either way she risked losing her child.

But immigration authorities were kind and humane when she checked in, she said, and allowed her and her child to go free after filling out paperwork and a short detention. Then the welcome she received at the respite center, she said, was a sign to her that “God is so great and never abandons us.”

The center is a first stop for immigrants like her, fortunate enough to have a place to go to, such as the one in McAllen, after being released by immigration authorities. It, too, was a first stop for the bishops looking to understand the situation of family separation and other immigration issues along the border.

Cardinal DiNardo, along with Auxiliary Bishop Robert J. Brennan of Diocese of Rockville Centre, New York, and Bishop Joseph C. Bambera of Scranton, Pennsylvania, took the opportunity to speak with as many as they could in the room, addressing topics such as why they left home or simply asking the migrants where they were headed and how they were doing.

A 12-year-old girl sitting with her father nearby asked Bishop Brennan about snow because she had never seen it. He asked where they were headed and the father responded: “Philadelphia.”

“Vas a ver la nieve,” he told her in Spanish, telling her she would see snow.

Then they asked him about New York.

“Do you know the Yankees? And the Mets?” Bishop Brennan asked. And the father answered “yes” with excitement.

The girl’s father, who traveled from Honduras mostly by foot, later said he was grateful for the great kindness the bishops had shown, how they had treated him and his daughter as human beings and it made him feel that his load had finally lightened after a long and hard journey.

Bishop Bambera said he found hope in hearing the people in the room talk about what’s ahead. They didn’t speak of making money but of finding safety for their children, he said, driven by “the most basic instinct to protect your family.”

Though the room held a lot of smiles and optimism, there was a silence about the journey that had gotten them there but whose details many of the sojourners were not yet ready to share, said Bishop Brennan. He found the experiencing “very moving,” he said, and it made him think of those he knows in New York “who’ve come on the other side of that journey.”

“This gives me a deeper understanding of the experience that many of our folks went through to get the point where I’ve come to know and love them on Long Island,” he said.

Volunteers, which included many young adults, zigzagged through the room during the visit, handing out clothes, playing with the children, showing those who had recently arrived the shower, giving out water and heating a home-cooked meal for them.

“In this room is the core of Catholic social teaching: the dignity of life,” said Bishop Bambera.

William Canny, executive director of Migration and Refugee Services for the U.S. bishops’ conference, who also accompanied the bishops on their visit, said the welcome was “a phenomenal act of charity by the church, to receive these people released by the government and helping them go onward to family and friends.”

“This is what we call welcoming, this is the act of welcoming that we all like to see,” he said, especially knowing about the incredibly difficult journey they had just made.

“It’s the moment when our American, our human values come forward and it was nice to watch, people were extremely grateful,” he said.

It was uplifting to see a group of people who’ve had a lot of bad things happen to them, “get a dose of good,” he said.

But few will forget that warm welcome, the cheers, the applause, the food and smiles, and the bishops who happened to be there that day to feed them and to ask them how they were doing. Along with others, they shared their migration journey that day in exactly the fashion Pope Francis has called for, Canny said, referring to a campaign by the Vatican that calls on Catholics and others of goodwill to build bridges of understanding and hospitality with migrants and refugees.

“It was heartening to see people of all ages come, the volunteerism, young and more experienced people, reaching out and sharing the journey as the Holy Father has asked us to do,” Canny said, recalling the images of the visit. “People stepping forward, welcoming, glasses of water, sandwiches, shampoo … and listening to their stories.”

PREVIOUS: Catholics mobilize at border and around U.S. to help separated families