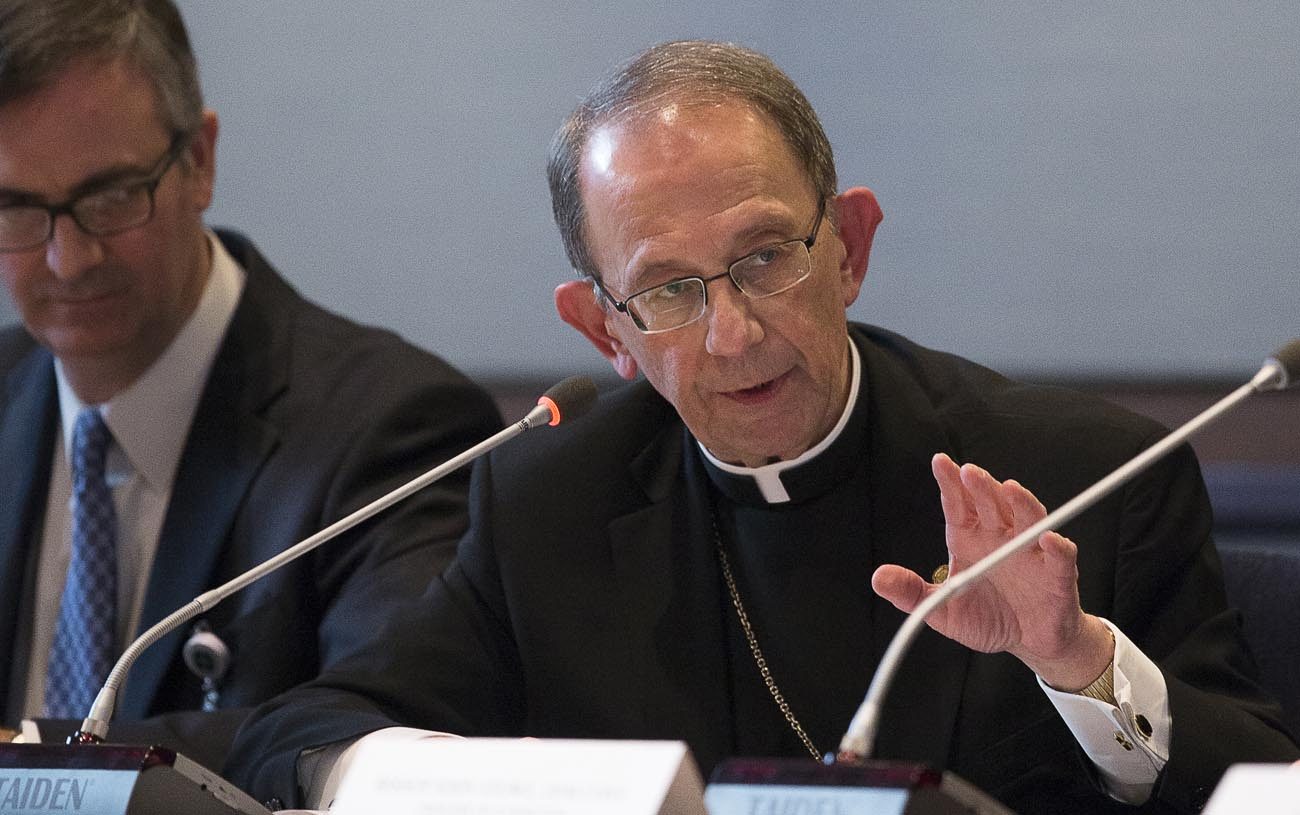 Bishop Lawrence T. Persico of Erie, Pa., speaks during a meeting in late January at the headquarters of U.S. Conference of Catholic Bishops in Washington. The Diocese of Erie has been at the forefront of an effort urging the release of a grand jury report on abuse claims in Erie and five other Pennsylvania dioceses. (CNS photo/Tyler Orsburn)

ERIE, Pa. (CNS) — The Pennsylvania Supreme Court July 27 cleared the way for the August release of a redacted version of a grand jury report on clergy sex abuse that has been termed by one of the state’s Catholic bishops as “graphic” and “sobering.”

The seven-member high court ruled that the long-awaited report must be released as early as Aug. 8, minus the names of several clergy who argue that the report sullies their reputations without providing them their constitutional right to defend themselves.

If all parties agree to conceal the estimated 24 names, the nearly 900-page redacted report could become public Aug. 8. If an agreement is not reached by then, the court will appoint someone to assist in reaching a consensus by Aug. 14.

“There can be no doubt that the subject matter of the report is incendiary, and therefore, the stakes for individuals reproached therein are substantially heightened,” Chief Justice Thomas Saylor said.

The Diocese of Erie in northwest Pennsylvania has been at the forefront of an effort urging the release of the report, which details widespread clergy sex abuse of minors in six of the state’s eight Catholic dioceses. In addition to Erie, the dioceses are Pittsburgh, Harrisburg, Allentown, Scranton and Greensburg.

Erie Bishop Lawrence T. Persico has repeatedly called for a swift and fair resolution to the legal quagmire. His most recent public statement on the matter came July 26, a day after Pennsylvania Attorney General Josh Shapiro sent an unprecedented letter to Pope Francis, asking the pontiff to direct church leaders to “follow the path of truth” and abandon efforts to silence abuse survivors.

According to Bishop Persico, “Victims and their advocates have indicated that the delay of the report’s release is causing more suffering. After two years preparing the report, the attorney general is understandably frustrated. And we have seen the concerns of the petitioners who feel they have not had due process.”

Bishop Persico was the only prelate in the state to testify in person before members of the grand jury, which was empaneled from 2016 to 2018.

“I believe in our legal system and have confidence that those involved understand the urgency and the import of the work that must be accomplished. I am hopeful that the situation will be resolved swiftly and fairly for all involved,” Bishop Persico added.

A legal drama has been playing out in Pennsylvania since June, when Shapiro had planned to release the grand jury report in its entirety. But the state’s Supreme Court ordered a last-minute stay after several clergy members who were named — but not charged — in the report argued that the document, if released without their comment, would violate their constitutional rights.

All six bishops of the dioceses investigated by the grand jury the past two years supported the release of the report, despite what Bishop Persico called its “graphic” and “sobering” content.

In his own diocese, which he has led since 2012, Bishop Persico is leading an effort to expose — once and for all — a tragic history of sexual abuse of minors by clergy and laypeople going back more than 70 years.

He is considered to be the first bishop in the nation to publish the names of priests and lay men and women who have been credibly accused of actions that disqualify them from working with children and youth.

“I want to express my sincere sorrow for the sexual abuse that has occurred within the church, particularly here in the Diocese of Erie,” Bishop Persico said last spring when he first publicly named 34 priests and 17 laypeople who were credibly accused of actions ranging from the use of child pornography to sexual assault of minors, and in some cases, inaction, or failure to report abuse.

He recently added more 11 more names to the Diocese of Erie’s publicized list of clergy and lay men and women who have been credibly accused. New names also have been added to those under investigation. The public disc

“In publishing the list of those who have credible allegations against them, the first goal is to protect children,” Bishop Persico said. “It is not possible for us to monitor all the people on the list. This is a necessary step in helping the public become aware of information that is critical for the community’s well-being.”

He also said it was vital to publish the names “in the hope of helping the victims/survivors move one step closer to healing. It is important they know they are not alone.”

Editor’s Note: Bishop Persico’s full statement and Attorney General Shapiro’s letter to Pope Francis can be found here. The diocese’s complete public disclosure list of clergy and lay men and women who have been credibly accused of abuse is available here.

Solberg is editor of Faith magazine, a publication of the Diocese of Erie.