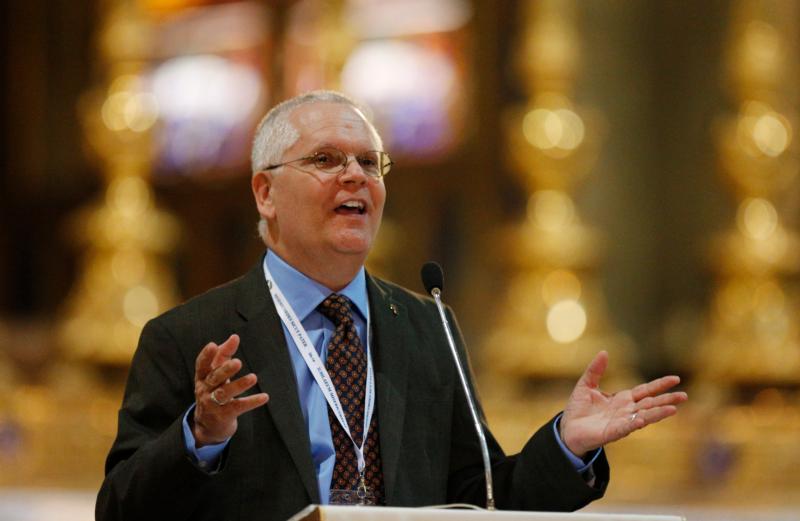 Deacon Greg Kandra of the Diocese of Brooklyn, N.Y., speaks in 2016 at a conference for deacons and their wives at the Basilica of Santa Maria Sopra Minerva in Rome. Deacon Kandra had a successful journalism career and was an observant, Mass-going Catholic, but 9/11 changed his life and put him on the path to the diaconate. (CNS photo/Paul Haring)

Deacon Greg Kandra of the Diocese of Brooklyn, N.Y., speaks in 2016 at a conference for deacons and their wives at the Basilica of Santa Maria Sopra Minerva in Rome. Deacon Kandra had a successful journalism career and was an observant, Mass-going Catholic, but 9/11 changed his life and put him on the path to the diaconate. (CNS photo/Paul Haring)

NEW ORLEANS (CNS) — Greg Kandra was a good-enough Catholic, observant and Mass-going, although he admits his wife was by comparison the real lion of the faith as they attended Mass at Our Lady Queen of Martyrs Parish in Forest Hills, New York.

Before he married, Kandra had forged quite a career at CBS News beginning in the 1980s. But it wasn’t easy at first.

“I graduated in the middle of the last big recession in 1981, and I couldn’t find a newspaper job to save my life. … I found myself spending entirely too much time at home, driving my parents crazy,” he told the Clarion Herald, newspaper of the Archdiocese of New Orleans.

At a dinner party, his father met a news producer for CBS and wistfully pleaded, “I’ve got this kid who needs a job.”

A few days later, Kandra went to the CBS bureau in Washington and aced a typing test.

“Lo and behold, a couple of weeks later, I was in the production center for ‘The CBS Evening News With Dan Rather,'” Kandra said. “It was the greatest education in the world.”

After marrying in 1986, he and his wife, Siobhan, moved to New York, where he worked as a writer and editor for CBS News Radio, writing copy for broadcast legends including Charles Kurault and Douglas Edwards.

His radio background led naturally to thinking about TV. Kandra moved to the television side in 1990 and wrote for several prime-time news shows.

Throughout it all the church remained in the background of Kandra’s life.

His office in the CBS Broadcast Center was in Manhattan and on that morning colleagues on the eighth floor were looking south at the smoke billowing from the first World Trade Center tower.

The next 48 hours “transformed” Kandra’s life.

“Covering that story from end to end had a profound impact on me and literally made me think more clearly about what I was doing, the choices I had made in my life and what I wanted to do in my life. You saw the signs staked to lampposts: ‘Missing: Have you seen him?’ It was heartbreaking,” he said.

He began by reading Trappist Father Thomas Merton’s “The Seven Storey Mountain.” Then came two retreats at a Trappist monastery. On one retreat he met a man who had been ordained as a deacon, the first Kandra had met on a personal level.

Then the deacon got up at Mass one day and preached.

“Something said to me, ‘That’s what you should be doing,'” Kandra said. “It was just that simple. I went back to New York and told my wife, ‘Hey, I’m going to be a deacon,’ and she just thought I was crazy.”

When the transformed man became Deacon Greg Kandra in 2007 — ordained for the Diocese of Brooklyn, New York — he felt an obligation to use his storytelling gifts as a way of breaking open the stories of Jesus that create a communion of faith.

Two weeks after ordination, Deacon Kandra was exploring the blogosphere. As the founding editor of Katie Couric’s blog at CBS, he knew a few things about blogging. The more he looked, Deacon Kandra could not find any blogs written by or about permanent deacons, so he launched “The Deacon’s Bench.”

Since 2007 his blog — www.patheos.com/blogs/deaconsbench — has reached 20 million readers, averaging about 150,000 page views per month. Deacon Kandra, 58, was to be in New Orleans July 22-26 to speak to the 2018 National Diaconate Congress about the necessity for clergy to embrace social media as a way of inserting the Catholic voice into the digital, and cacophonous, public square.

“The idea is to take the encouragement of Pope Francis and apply that to our ministry, particularly to our social media ministry on Facebook and blogging and on Twitter,” Deacon Kandra said. “We need to act as leaven in the world. … This is an opportunity for deacons to step into this world and say something beneficial and in service to the Gospel.”

Deacon Kandra tries to post three or four brief reflections a day, mostly on news that deserves a deeper look.

He also wants people to learn more about the ministry of deacons, who are ordained to be ministers of charity and service. He tries to show that the Catholic Church is indeed catholic — universal — and cannot be boxed into one or two or a dozen charisms. His “day job” is multimedia editor for Catholic Near East Welfare Association, a papal agency that offers pastoral and humanitarian support to the Middle East, North Africa, Eastern Europe and India.

While he has been intimately involved with communications for nearly 40 years, Deacon Kandra understands why some of his deacon brothers and priests may feel unprepared or hesitant to immerse themselves in social media.

“But I always mention this from Scripture when I talk to them: ‘Be not afraid,'” Deacon Kandra said. “Sure, it can be intimidating and daunting, and people can be cruel, but we have to put ourselves out there. We can’t leave social media to the crazy people and the trolls. We need to be a voice of love and reason and hope in a world so desperately in need of it.”