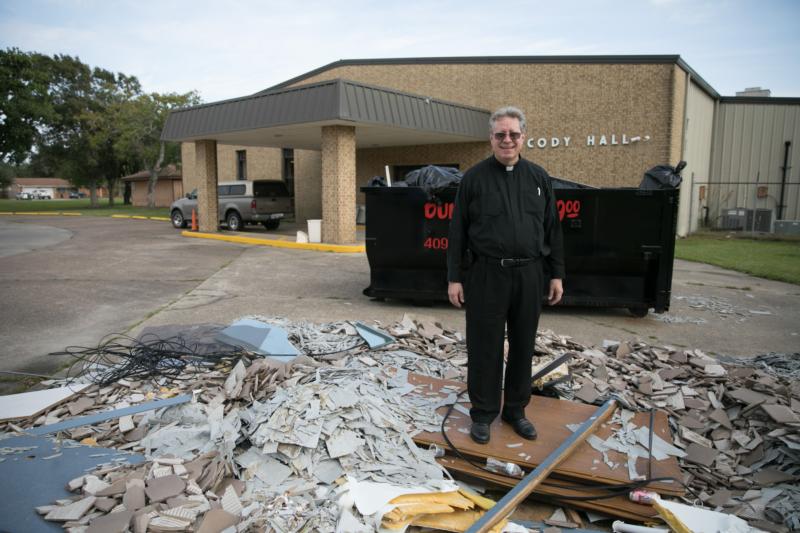 Father Kevin Badeaux, pastor of St. Joseph Church in Port Arthur, Texas, stands atop rubble outside the parish hall in November 2017, three months after the church was badly flooded from Hurricane Harvey. One year after the hurricane hit Texas, Catholic Extension is committing more than a half a million dollars to help the Beaumont Diocese rebuild. (CNS photo/courtesy Catholic Extension)

PORT ARTHUR, Texas (CNS) — After Hurricane Harvey last year, “there was no rainbow,” Bishop Curtis J. Guillory of Beaumont said about the massive destruction wrought by the storm.

But with its commitment of nearly $670,000 to help the diocese rebuild, “Catholic Extension is that rainbow and the promise that things will get better,” the bishop said. “We are so grateful for their generosity.”

Father Jack Wall, president of Catholic Extension, presented a check for $100,000 to the Diocese of Beaumont during a special Mass July 10 at St. Joseph Catholic Church in Port Arthur. The check was for the first part of the funds to come from Catholic Extension.

“We are privileged to help,” Father Wall said. “We have supported Texas for more than 100 years and in this time of crisis, especially, we want you to know that you are not alone. The church is bigger than any challenges you face.”

Based in Chicago, Catholic Extension raises and distributes funds to support U.S. mission dioceses, many of which are rural, cover a large geographic area, and have limited personnel and pastoral resources.

Hurricane Harvey’s blow to Texas was swift, but recovering from it will take years. The magnitude of last year’s disaster was massive — destroying homes, businesses, roadways and churches. Most of its damage was caused by flooding.

In the Diocese of Beaumont, which is in southeast Texas, church buildings took in 8 feet of water; in some areas, including Port Arthur, 90 percent of the land was flooded.

Residents are struggling with the financial tolls of losing their belongings and their livelihoods. Parishes have reported ruined buildings as well as decreased revenue from their weekly collections, because parishioners are in dire straits.

Catholic Extension will fund four projects in the Beaumont Diocese:

— Restoration of the director’s residence at Holy Family Retreat Center in Beaumont.

— The ministry of religious women in the diocese’s western vicariate; they serve three parishes with large Hispanic populations, who were ravaged by the hurricane.

Flood insurance for the buildings that will be restored is either insufficient or nonexistent and renovation costs are extensive, said Catholic Extension.

It also described the sisters’ ministry as “critical,” because “they are bilingual and a bridge to the Hispanics, mainly immigrants, who live in poverty, but are very dedicated to the church.”

“They have been living in prolonged misery, since the hurricane struck, but the sisters serve them daily with pastoral care, home visits and religious education,” Catholic Extension said.

Some of the funds were raised at an event hosted by Catholic Extension last February in honor of retired Archbishop Joseph A. Fiorenza of Galveston-Houston. A native son of Beaumont, he asked that the event’s proceeds benefit rebuilding efforts in the diocese where he grew up.