Foster vocations by being compassionate friend to others, archbishop says 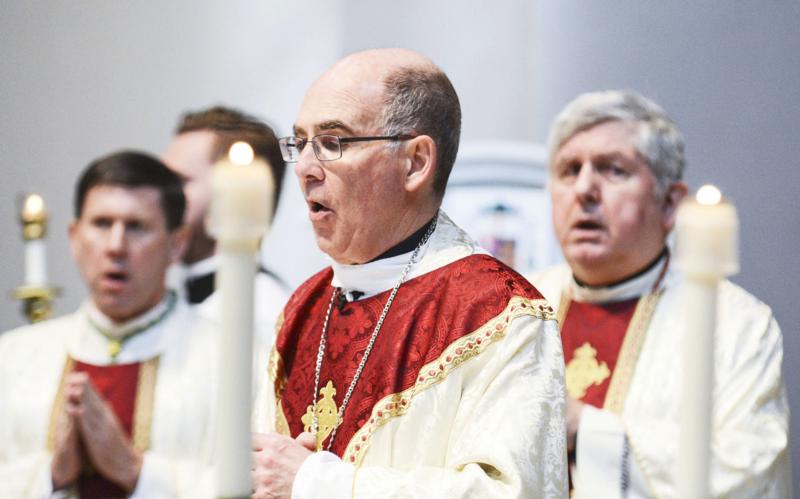 Archbishop J. Peter Sartain of Seattle, a native of Memphis, Tenn., celebrates the opening Mass of the 2018 Serra International Conference June 28 at the Cathedral of the Incarnation in Nashville, Tenn. Behind Archbishop Sartain are Bishop J. Mark Spalding of Nashville and Cardinal Thomas Collins of Toronto. (CNS photo/Andy Telli, Tennessee Register)

NASHVILLE, Tenn. (CNS) — As people seek to serve God, they should “concentrate not so much on the job we are doing for him but on his friendship,” Archbishop J. Peter Sartain of Seattle said in his homily for the opening Mass of the 76th Serra International Conference held earlier this summer in Nashville.

“It is then that we will be the most effective in our encouragement of vocations, because we will allow the light of God to shine through us,” said Archbishop Sartain, who noted that Serra International was founded in his archdiocese.

Serra International is a lay organization with 500 clubs and 12,000 members around the world devoted to promoting vocations to the priesthood and religious life.

The conference drew more than 400 people from nearly 10 countries, said Bob Rudman, a vice president of Serra International and one of the organizers of this year’s conference.

“It was just a phenomenal success,” said Rudman, a member of the Serra Club of Williamson County in the Diocese of Nashville.

The goal for organizers of the June 28-July 1 convention was that attendees “would grow in spirituality through the speakers we had, the programs we offered, the camaraderie with people from all around the world,” Rudman told the Tennessee Register, Nashville’s diocesan newspaper. “They’re doing similar things you’re trying to do even though they’re operating under conditions that might be much more stressful than we have in the United States.”

In his homily at the opening Mass at the Cathedral of the Incarnation, Archbishop Sartain spoke of two people who inspired his own vocation: his aunt, Sister Camille, who was a member of the Dominican Sisters of St. Cecilia in Nashville, and Msgr. Patrick Lynch of the archbishop’s hometown of Memphis.

“Growing up in Memphis, it always seemed to me to be the most natural thing to have a nun for an aunt,” Archbishop Sartain said. “She loved God and cherished her vocation as a Dominican sister.”

“Serrans are called to engender an environment in families and in the church in which it is, in fact, the most natural thing in the world to consider a vocation in the church,” he added. “Be a compassionate friend to others and bring them to Christ. … He will do the rest. He uses you in ways far beyond your comprehension, I assure you.”

During the convention, Cardinal Thomas Collins of Toronto was installed as the organization’s new episcopal adviser, the first from outside the United States.

The new president of Serra International, Mario Biscardi, is from his archdiocese, Cardinal Collins noted.

“I’m a great supporter of Serra International,” said Cardinal Collins, who pointed out that the Serra Club in his archdiocese sponsors the Ordinandi Dinner, which draws close to 2,000 people every year and features seminarians talking about their vocation stories. On the same day, the Serra Club also hosts the Ordinandi Luncheon for high school students, he said.

Cardinal Collins celebrated the closing Mass for the conference at the Catholic Pastoral Center in Nashville. In his homily, the cardinal said it is important to have a wide perspective on God’s plan for his people and a “laserlike focus” on Jesus Christ.

Receiving the Eucharist at Mass “is a dress rehearsal for death,” Cardinal Collins said. “The Lord whom we encounter here is the Lord we’ll encounter when we lift off the bumpy runway of life and finally head home.”

The convention featured talks from other speakers including: Michael Warsaw, chief executive officer of the Eternal Word Television Network; Tom Thibodeau, a religious studies professor at Viterbo University in La Crosse, Wisconsin; Father Austin Gilstrap, director of vocations for the Diocese of Nashville; Sister Peter Marie Chrismer, a member of the Dominican Sisters of St. Cecilia; and Deacon Rafael Bougrat of St. Philip Church in Franklin; and Father Paul Halladay, a U.S. Army chaplain with the rank of major.

Father Halladay, whose brother Father Phillip Halladay is a priest of the Diocese of Nashville, said of the Army’s 550,000 soldiers, 25 percent are Catholic. But the Army has only 85 priests as chaplains.

“If a service member is looking for hope, if they have reached their limits, if they are hanging on … it’s understandable their devotion is going to go to that person who was there in their darkest hour,” Father Halladay said. “We need to have priests who are there to help those Catholic men and women to be able to be that robust, faithful, alive Catholic.”

NEXT: Bill to repeal Oregon’s sanctuary law on November ballot