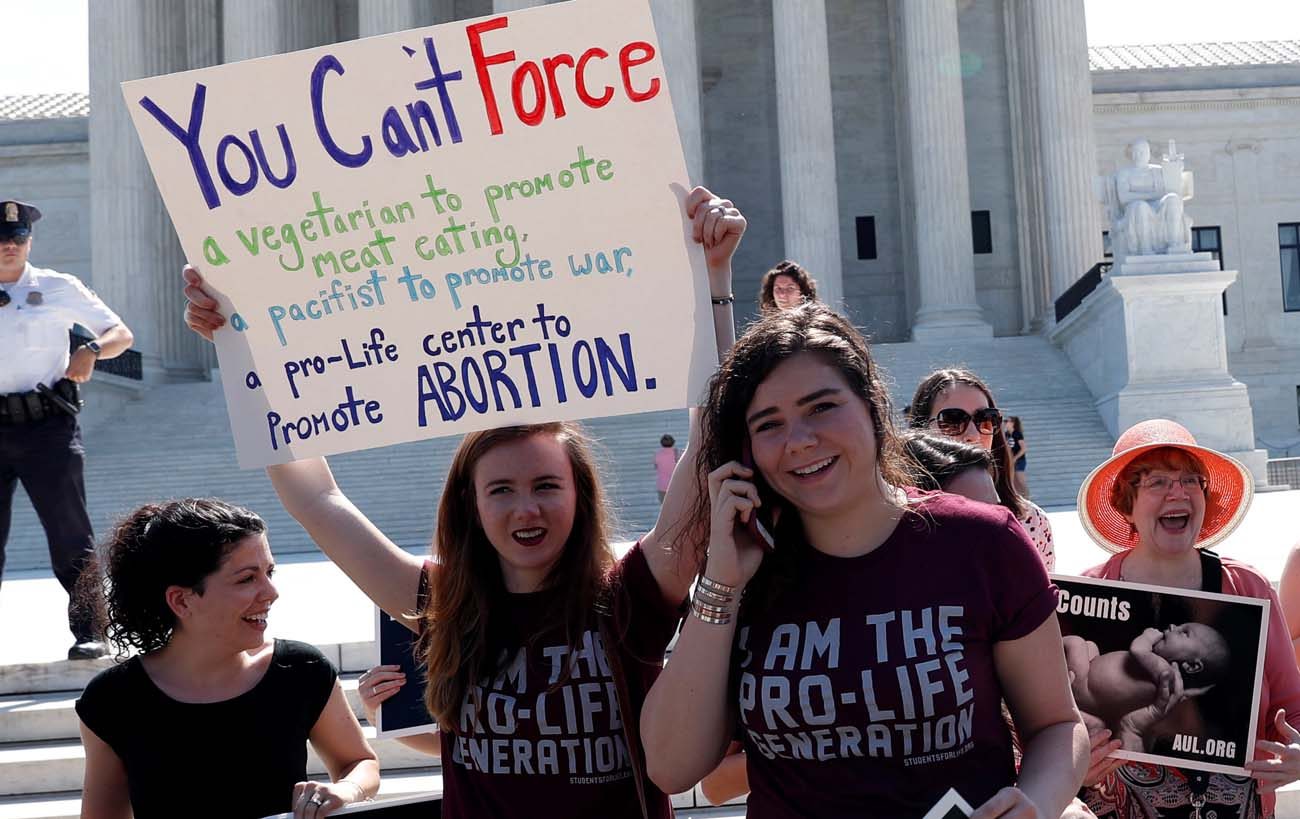 Young pro-life advocates hold signs outside the U.S. Supreme Court June 26 in Washington. Many in the conservative movement have been hoping after Republican presidents appoint enough justices to the court, Roe v. Wade will be overturned, but legal experts interviewed by Catholic News Service said it seems unlikely that President Donald Trump's pick to replace Justice Anthony Kennedy will lead directly to an overturn. (CNS photo/Leah Millis, Reuters)

WASHINGTON (CNS) — During his 30 years on the Supreme Court, Justice Anthony Kennedy was usually in the middle of the court on life issues.

While he voted with the majority in Planned Parenthood v. Casey, which reaffirmed the central holding of Roe v. Wade, he was in the minority in Hill v. Colorado, which limited the ability of pro-life activists to distribute pamphlets and engage in sidewalk counseling outside abortion clinics. He also was in the minority in a decision striking down a state ban on partial-birth abortion.

Although many in the conservative movement have been hoping that, after Republican presidents appoint enough justices, Roe v. Wade will be overturned, it seems unlikely that President Donald Trump’s pick to replace Kennedy will lead directly to an overturn.

“What will probably happen is that the Supreme Court would be more open to the states regulating and restricting abortion. An outright reversal of Roe is less likely,” said Michael Moreland, a professor of law and religion and director of the Eleanor H. McCullen Center for Law, Religion and Public Policy at Villanova University.

“In a limited number of cases they’ll make a sweeping decision — Roe, Obergefell — but the courts tend to take these things in multiple steps. They might not go all the way,” he said.

Moreland added that the court overturning Roe and finding a right to life in the due process clause of the 14th Amendment is extremely unlikely. That clause says that no one shall be “deprived of life, liberty or property without due process of law.”

“Even (former Justice Antonin) Scalia thought the Constitution left the abortion issue to the states,” he told Catholic News Service.

A Pew Research poll conducted in January found that 69 percent of Americans did not want to see Roe v. Wade overturned.

“One way in which Kennedy was an originalist was he didn’t consider assisted suicide to be a constitutional right,” said Cathleen Kaveny, a professor of theology and law at Boston College.

Kennedy was on the Supreme Court when it heard its first right-to-die case in 1990. He was part of a 5-4 majority that upheld the lower court’s decision that the parents of someone in a vegetative state could not direct the hospital to remove the feeding tube without adequate proof that their daughter would make the same decision.

He also was on the court for a unanimous ruling in Washington v. Glucksberg in 1997 that assisted suicide is not protected by the due process clause.

In 2006, he was part of a majority in Gonzalez v. Oregon, in which the court found that the Controlled Substances Act could not be enforced against doctors who, following the Oregon state law, prescribed medicine that would allow patients to end their life.

Kennedy also voted in favor of several restrictions on the use of the death penalty while on the court.

In Atkins v. Virginia, he was part of a majority that ruled the use of the death penalty unconstitutional if the offender has an intellectual disability; in Roper v. Simmons he wrote the majority opinion, which states that executing minors constitutes cruel and unusual punishment, and in Kennedy v. Louisiana he wrote for the court that imposing the death penalty for child rape where the child did not die also constitutes cruel and unusual punishment.

“Maybe those limits on the death penalty will go and maybe they won’t,” Kaveny said.

NEXT: Encuentro process aims to identify, train 20,000 Hispanics to be leaders