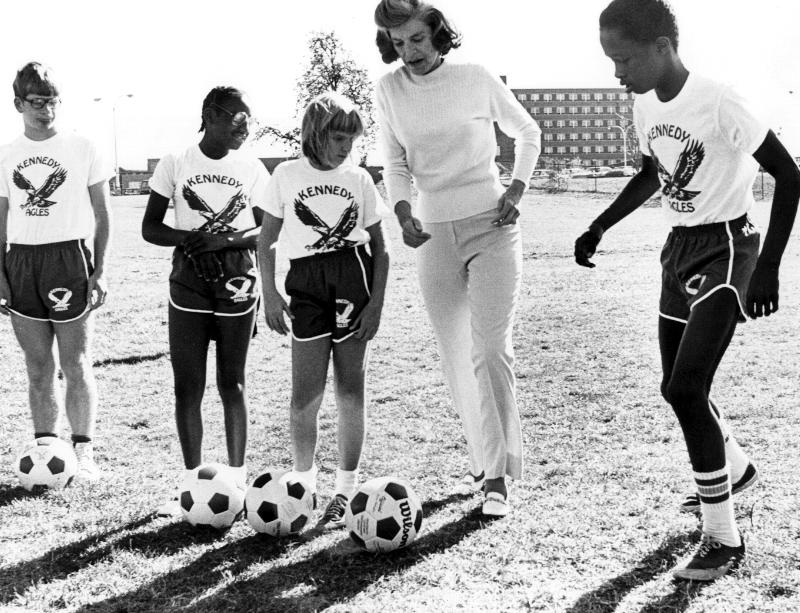 WASHINGTON (CNS) — The Special Olympics, founded by Eunice Kennedy Shriver, turned 50 this year, with this year’s games held in Seattle.

The Catholic community had joined in a winning pitch four years ago to host the Special Olympics for 2018 and were rewarded with the games.

Not only were the games, held July 1-6, a success, Seattle Catholics are focusing now on how to leverage that success for its pastoral initiatives for Catholics with developmental disabilities.

“Even though we’ve done a lot of great things, we’re just at the beginning,” said Erica Cohen Moore, director of the Archdiocese of Seattle’s Office of Discipleship. “This has given us the traction to move forward quickly with mental health issues. I feel, like the rest of the country, that we’re in a mental health epidemic” with rising suicide rates.

“We’re also really, really trying to work on trying better to connect with our multicultural communities,” she added.

This year’s Special Olympics USA Games had more than 4,000 athletes from around the U.S. competing in 14 Olympic-type team and individual sports.

The youngest competitor of them all was 9-year-old Frannie Ronan of Kirkland, Washington, a Seattle suburb, who competed in gymnastics. Her father, Michael, is chair of the Special Olympics board for Western Washington.

Understanding that Frannie would likely be born with Down syndrome, “we went into learning mode,” Ronan told Catholic News Service. “We already had a 9-year-old at the time, so we thought we knew what parenting was all about.” Not so, they found out.

But the Ronans dived in deep with the Special Olympics. “This has been a labor of love for me and a lot of other people,” he said. “As a business leader, seeing the other businesses, state and local government, law enforcement, the archdiocese coming together. It became easy to see how SO became a unifying function for the state of Washington.” 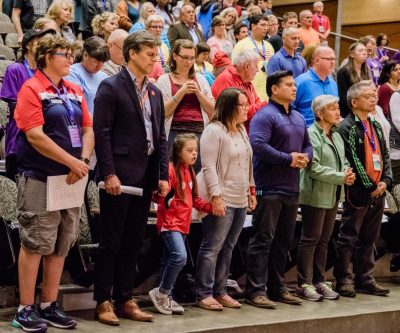 Tim Shriver, chairman of Special Olympics, second from left, holds hands with 9-year-old athlete Frannie Ronan during a June 30 Mass celebrated on the campus of the University of Washington in Seattle for athletes at the Special Olympics. (CNS photo/Katie Niemar Photography, courtesy Archdiocese of Seattle)

Moore and Sandra Barton Smith, assistant superintendent for Catholic identity and essential services for the Seattle Archdiocese’s Office for Catholic Schools, said inclusion has been a key part of the ministry of Archbishop J. Peter Sartain since his arrival in 2010.

“Archbishop Sartain is absolutely phenomenal. He agreed there should be a ministry. He’s helped us with our inclusion ministry. When the USA games came to Seattle, he embraced that,” said Lucinda Soha, the mother of Stephanie Soha, 38, who has competed in the Special Olympics since age 9. “It just couldn’t be better.”

“Things are never ordinary,” Lucinda Soha said. “But there’s a blessing because it takes you out of your everyday boring.”

She noted it was through Special Olympics that she learned of the existence of an adapted catechism for those with intellectual disabilities.

The catechism was developed by Deacon Larry Sutton of the Diocese of Pittsburgh, who comes to Seattle twice a year to train teachers.

“I focus on special needs ministry, especially children and teens with autism. I used some typical teens wherever possible as my teachers or mentors when I’m working on specific skill sets. In Seattle, it’s teaching about religion, teaching about God,” Deacon Sutton said. “Sometimes, kids will learn better from these teens rather than from adults.”

Cohen recalled one boy with autism who was having a hard time connecting with a catechism lesson. But the kid “really liked ‘Star Wars,'” she said. Taking a page from Deacon Sutton’s program, “we used light sabers of different colors” to connote the different seasons of the liturgical year. “It was hilarious,” Cohen added. “And it worked! The boy was just confirmed this year.”

The idea behind the Special Olympics got its start when Eunice Shriver, who had been advocating throughout much of the 1960s on behalf of those with intellectual disabilities, teamed up with Canadian physical education professor Frank Hayden on the need for those with disabilities to participate in athletic events. The first Special Olympics were held at Soldier Field in Chicago in July 1968 — just one month after the assassination of Eunice’s brother Bobby Kennedy, who was seeking the Democratic nomination for president.

“We’re working really hard to open our schools more intentionally to serve all learns. That’s the spectrum of learners,” from those deemed gifted and talented to those with profound disabilities, Smith said.

“Special Olympics is looking into broadening its services to go beyond academics and get into robotics. We’re excited about that, because that’s the mission of church – bringing us all together as one,” Smith said.

“How can we be a part of the next 50 (years)? That’s exciting. We had over a thousand participate as volunteers. That was exciting. It was a great way to bring together the ministries of the church It was a win! In all ways.”

NEXT: From the pulpit, priests address allegations against Archbishop McCarrick