Amid hardships, Syriac Catholic young people attest to their faith 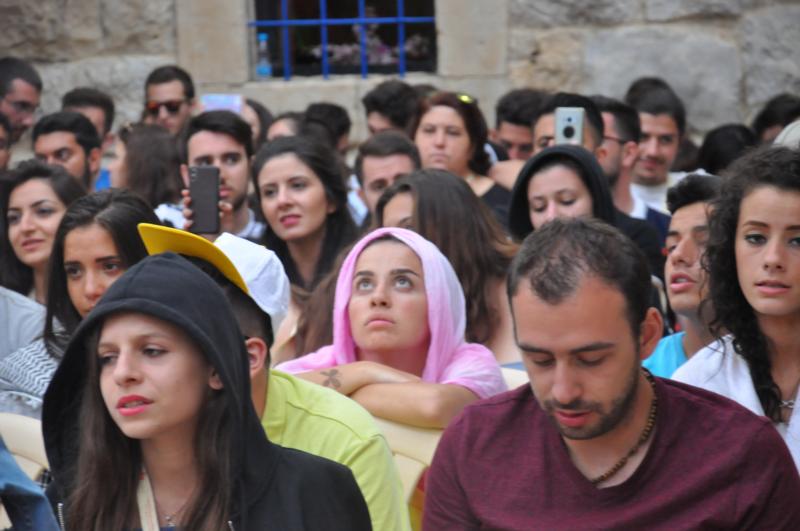 Young from around the world pray July 21 at St. Ephrem monastery in Chbanieh, Lebanon. The young people were in Lebanon for a July 17-22 gathering of Syriac Catholics. (CNS photo/courtesy Syriac Catholic patriarchate)

BEIRUT (CNS) — Driven by a zeal and strong ties to the roots of their faith, 450 young people from all over the world gathered in Lebanon for the first Syriac Youth International Convention, open to people 18-35.

“Our main objective is to give the youth hope … because of what we have suffered, especially in Syria and Iraq,” Father Jules Boutros, who heads the pastoral youth committee for the Syriac Catholic Patriarchate, told Catholic News Service. He said more than 60 percent of Syriac Catholics have emigrated from the Middle East in the last decade.

“They have lost everything or almost everything and have been diffused all over the world,” he said of the Syriac faithful. The convention gave the young adults, who now mostly live in the diaspora, a springboard to foster global solidarity and to keep them united with their church.

Fawzy Basily, 26, was one of 20 young people who came from Aleppo, Syria.

“This is the first time for a worldwide Syriac Catholic conference and we want all the world to know that we Christians are still in Aleppo. We are strong in faith despite all we went through, and we will continue on,” he told CNS at Our Lady of Light convent in Faytroun, Lebanon, the main venue of the gathering.

He recounted how their Aleppo parish church, Our Lady of the Annunciation, was damaged in 2013-2014. “That was a terrible year. Missiles from everywhere, bombs and explosions.”

About 100 members of the parish’s Scout group were meeting in the basement of the church when one of those missiles hit.

“Not one of us was hurt. We believe Our Lady protected us,” Basily said. The Scouts worked together to clear the debris and the broken glass, from which they created an icon of Our Lady of the Annunciation.

“We never gave up on our church. This church gave us our strong foundation in faith,” Basily said.

For Elias Atmaja, 20, the convention was a chance not only for a spiritual renewal but also to reconnect with old friends from Aleppo.

Atmaja now lives in Belgium, from where he came to the event with 22 other Syriac youth.

“It’s a big change,” the aeronautical engineering student said of his adoptive country, noting that it’s a “dry environment” spiritually, atheism is rampant, and many people there consider it strange to go to church. “In Belgium, they don’t know there are Christians in Syria,” Atmaja added.

“Here at the convention, we have an opportunity to share and renew our faith and feel that the church is alive,” Atmaja said. “It will be sad to leave,” he admitted, but added that he’s going back to Belgium “recharged.”

Shahad, a 32-year-old Iraqi who asked that her last name not be published, said she appreciated the religious freedom in Lebanon.

“The Christians of Lebanon feel that they belong in their homeland,” Shahad said. “I wish that Christians in Iraq could live like this,” she said.

Natives of Basra, Iraq, Shahad and her family moved to Mosul, where they faced increasing threats from terrorist groups. Next move was 2008 to Irbil, the capital of Iraqi Kurdistan in the northern part of the country. Six years later, some 100,000 Iraqi Christians also fled to Irbil, when they were uprooted from Mosul and the Ninevah Plain by the Islamic State. The convention hosted 40 young adults from Irbil.

“In Iraq, Christians feel like strangers in our own country. The Muslims make us feel like we don’t belong,” Shahad explained.

“Here, we have something in common,” she said of the gathering. “And I can see that Christians will always be united by our faith. This gives me hope for our future.”

On July 22, Patriarch Younan and Syriac bishops from around the world concelebrated Mass for the youth.

Before Mass, the convention participants had an open forum with Patriarch Younan. The first question: Will another such gathering be planned?

“Of course, we wish to,” the patriarch responded, to thunderous applause, noting, “You are all smiling.”

“Now you have to be the missionaries in your parish,” he told them. “Seek God, follow him, wherever you are in the world.”

Syriac Catholic Bishop Barnaba Habash of Our Lady of Deliverance in Newark, New Jersey, told Catholic News Service: “I give thanks to the Lord for what I am seeing here, how these youths are really happy because of their faith, no matter what their difficulties.” The enthusiasm of the convention participants, he said, is a testimony that “our priests really understand what it is to be a missionary in the diaspora.”

Bishop Habash said he believed the October Synod of Bishops on young people, the faith and vocational discernment with Pope Francis would herald “another page in the new days of the church.” Patriarch Younan assured the gathered youth that their struggles and concerns would be conveyed to the synod.

NEXT: Cardinal Tagle tearily laments killing of innocents in Philippines