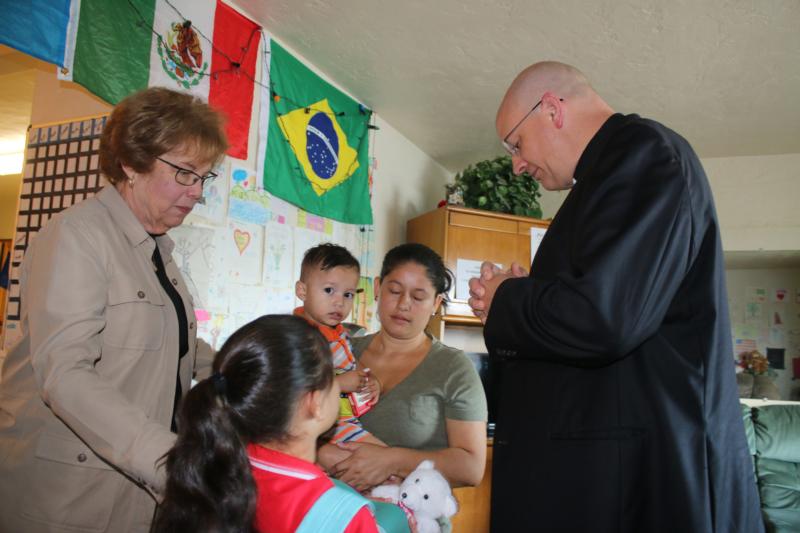 Dominican Sister Donna Markham, president and CEO of Catholic Charities USA, and Bishop Edward J. Weisenburger of Tucson, Ariz., pray July 12 with a young family moments before they leave Casa Alitas, a family shelter in Tucson, for a bus trip that will take them to family in Baltimore. (CNS photo/Michael Brown, Catholic Outlook)

NOGALES, Mexico (CNS) — Dominican Sister Donna Markham, president and CEO of Catholic Charities USA, grew emotional talking about the harrowing stories she heard from immigrants about the life they left behind to seek refuge in the United States.

“The suffering they are going through is unimaginable,” she said after listening to stories from families waiting to apply for asylum at the international border at Nogales in the Mexican state of Sonora.

Sister Markham, who recently completed a tour of a detention facility for children in McAllen, Texas, said she wanted to visit Nogales to get the whole story behind the current public debate over immigration.

“Their stories,” she said, pausing to compose herself. “They are running for their lives. Literally, they left at gunpoint.”

She was joined July 11 at the Nogales Port of Entry by Jesuit Father Sean Carroll, executive director of the Kino Border Initiative, an organization that assists mostly families who have been sent back to Mexico following deportation proceedings.

Were it not for those shelters, families would have to wait in line at the port of entry in the humidity and heat of 100-plus degrees for about two weeks, Father Carroll told Catholic Outlook, newspaper of the Diocese of Tucson, Arizona.

The first family Sister Markham met included 11 members, four of whom were young children. They left the Mexican state of Guerrero, one of the poorest and least safe areas in the country.

Father Carroll interpreted their story, explaining how their lives had been threatened by a local political party during the recent presidential election. At the border, their biggest fear is that the father and uncle would be detained, the children taken from them, and the women deported. Knowing that risk, they waited anyway because “they were threatened with death” in their hometown, Sister Markham said.

While such conditions might easily fall into the classic example of political asylum, Peg Harmon, who is executive director of Catholic Community Services in the Diocese of Tucson and has been a Catholic Charities USA board member, acknowledged that under the current vetting system, there were no guarantees.

Another family — two women and two young children — also spoke to Sister Markham. One woman held a young girl close to her who appeared to be no older than 9 and was crying inconsolably. The mother, also from Guerrero, spoke of her husband being taken and her daughter’s life being threatened. She was with another woman, with a son about same age. They had tried to cross into the U.S. in January but were stopped and deported in February. Under current U.S. policy, they would not be eligible to enter the country because of the previous attempt, but have no other place to go.

Sister Maria Engracia Robles Robles, a Missionary Sister of the Eucharist, works at a “comedor” — a combined soup kitchen and food pantry — run by Kino Border Initiative in Nogales, Sonora. As she listened to the families’ stories, she used her cellphone to put their names on the list of applicants waiting to file for asylum.

Several people passing the families as they entered the U.S. from Mexico offered them candy and money. Local charities also supplied blankets and water bottles, kept in large coolers, at the border station.

Following her meeting with the families, Sister Markham said there were two things she hoped to accomplish when she returns to her organization’s national headquarters outside Washington.

“We need to call all believers to prayer, and we have to educate people who don’t have the opportunity to come here,” she said.

Sister Markham said that visiting Nogales was a completely different experience from her trip to visit the juveniles held in Texas. In McAllen, “they are already going through the process; there the process is very slow.”

“Here, it is very painful to hear the stories, to know how people have suffered to get this far, especially the children,” she said. “It’s emotionally overwhelming. It’s more painful than I imagined.”

The next day in Tucson, Sister Markham was joined by Bishop Edward J. Weisenburger of Tucson at Casa Alitas, a family shelter run by Catholic Community Services. Casa Alitas receives families in transition from Immigration and Customs Enforcement, or ICE, after being processed from the border and immigration court.

Early July 12, two families were preparing to leave Casa Alitas and another four were being placed there. When the bishop and Sister Markham arrived, Olga, a Honduran refugee, was preparing to leave with her two children to board a bus for a three-day trip to stay with family in Baltimore.

A few hours later, Valentia, a Mexican native, was leaving with her two children for her own cross-country trip to a community in New Jersey. Soon the Casa Alitas staff welcomed new families — three from Brazil and one from Mexico — brought to the facility by ICE.

Sister Markham visited the home the night before and had a chance to spend some time with the departing families. During her morning visit, she gave hugs and smiles to the familiar faces, and later, interviews with local media who arrived to document the visit.

“Our goal is to do everything we can to see that these families are treated with dignity,” she told one reporter.

A glance around the now-crowded living area revealed weary women and children, some of whom looked ready for a nap. Some needed clothing, which was available from a supply room. The smell of a hot breakfast began to waft out of the kitchen where signs and wipe boards and children’s drawings created a homey atmosphere.

Bishop Weisenburger noted that “20 percent of the Gospels is about taking care of the poor and needy.” Taking care of immigrants and refugees is important for those who want “to really live the Gospel of Jesus Christ and to call ourselves Christian.”

As she began to describe her experience from the day before, Sister Markham again paused to fight back tears after talking about “the babies sitting at the border in the heat.”

“I have a big heart,” she explained, smiling again.

Before leaving to catch her flight back east, Sister Markham showered praise upon the more than half dozen workers and volunteers gathered at Casa Alitas as new families arrived.  “I am just amazed at the staff and the level of attention they give to the families here.”

NEXT: Indian officials seek to freeze bank accounts of Missionaries of Charity