Duterte says he’ll curb tirades, then tells bishops not to criticize him 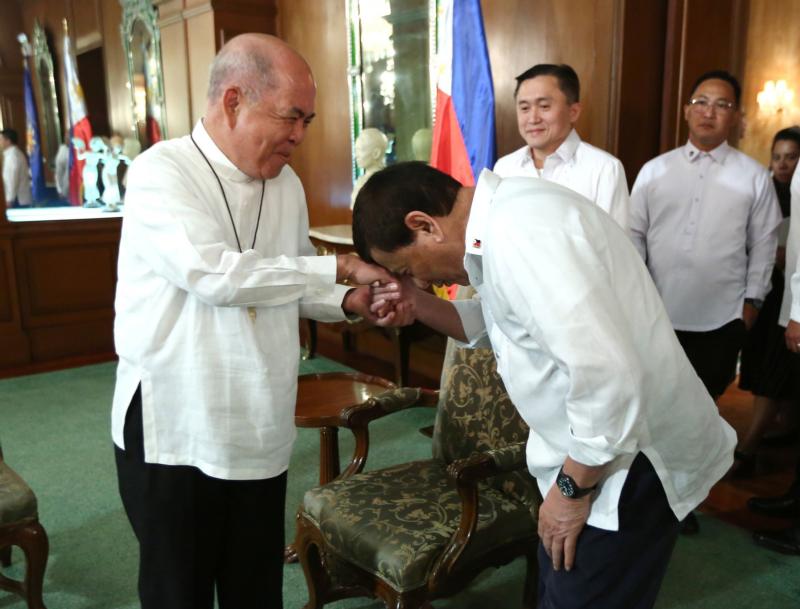 MANILA, Philippines (CNS) — Outspoken Philippine President Rodrigo Duterte is to curb his tirades against the Catholic Church after agreeing to a moratorium on statements deriding priests and bishops.

Ucanews.com reported the presidential palace announced the president’s decision after a 30-minute meeting July 9 between Duterte and Archbishop Romulo Valles of Davao, president of the Catholic Bishops’ Conference of the Philippines.

The president has drawn flak from Catholics for calling God “stupid” in a speech and for spewing diatribes against Catholic bishops and priests in recent months.

A day after the meeting, however, Harry Roque, the president’s spokesman, said Duterte wanted church leaders to stop criticizing his administration, ucanews.com reported.

“Given there is separation of church and state, (church leaders) should not use the pulpit to criticize his administration,” said Roque, quoting the president.

Duterte’s meeting with Archbishop Valles came after the Catholic bishops’ conference released a statement lambasting a wave of killings over the past two years.

Roque described the statement as “very tame,” adding that it’s “nothing new” because “there was no outright condemnation.”

“I was expecting the worst, it was a very tame pastoral letter, I thought,” he said, adding that the church leaders might be avoiding “outright confrontation” with the government.

Before meeting Duterte, Archbishop Valles said he accepted the “gracious invitation” of the president for a dialogue “because as bishops, we are open to listen to one another with respect.”

On June 25, Duterte formed a committee to hold dialogue with leaders of the Catholic Church following his controversial remarks about God.

Archbishop Valles, who is known to be a friend of Duterte, said he did not prepare an agenda for the meeting.

“Remember that the invitation came from them. We will just play it by ear,” he said. He added that the meeting was “an initial step” and that church leaders were ready to listen to Duterte.

The bishops’ pastoral letter after their plenary assembly expressed concern over a host of social problems faced by the Filipino people.

Even as it enumerated human rights abuses and threats to the lives of the clergy, the letter also underscored the partnership between the government and the church.

NEXT: Guidelines needed for use of deconsecrated churches, cardinal says