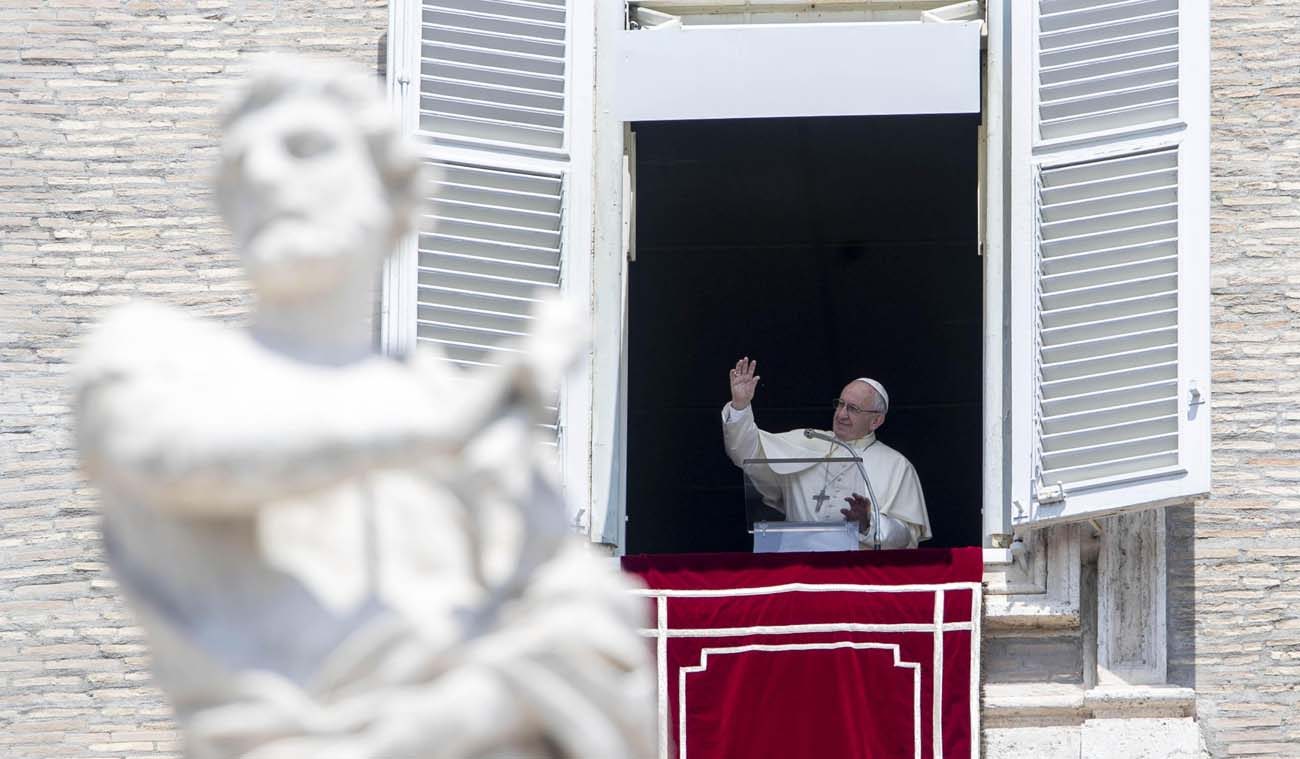 Pope Francis waves as he leads the Angelus from the window of his studio overlooking St. Peter's Square July 29 at the Vatican. (CNS photo/Massimo Percossi, EPA)

VATICAN CITY (CNS) — Pope Francis asked people to generously serve those most in need and to never waste food.

“Never throw away leftovers,” he said July 29 before reciting the Angelus prayer with people gathered in St. Peter’s Square.

Leftovers should be eaten later or given to someone in need who will eat them, he said, advising people to talk to their relatives who lived through the aftermath of the Second World War and ask what they did with any uneaten food.

The pope made his comments during his reflection on the day’s Gospel reading about the multiplication of the loaves.

He praised how the young boy in the account came forward with the little he had — five loaves and two fish.

“Young people are like this, they are courageous. We have to help them continue” being brave, he said.

The Gospel account, the pope said, shows how Jesus is aware of the people being hungry and how he gets his disciples involved to offer “his word, his consolation, his salvation and, in the end, his life.”

“We, his disciples, cannot look the other way,” he said. “Only by listening to the people’s simplest requests” and accompanying them with their real problems “can one be listened to when one speaks of higher values.”

Humanity is hungry for “bread, freedom, justice, peace and, above all, divine grace,” the pope said. And God’s love can satisfy them all through his disciples and through those, like the young boy, are moved by compassion and contribute what little they have.

Proclaiming Christ demands a generous commitment of solidarity toward the poor, the weak, the least and the defenseless, he said.

He also encouraged global policies that encourage development, nutrition and solidarity, and not hatred, weapons and war.

After praying the Angelus, the pope reminded people that it was everyone’s duty to denounce and oppose the “shameful crime” of human trafficking.

World Day against Trafficking in Persons, celebrated July 30, seeks to raise awareness about “this scourge,” which “reduces many men, women and children to slavery,” he said.

The aim of traffickers is to exploit people “for cheap labor, for the sex trade, for the trade in organs, to force them to beg or to engage in delinquency,” he said, and traffickers are now using “the routes of migration … to recruit new victims.”

“It is the responsibility of everyone to denounce injustices and firmly oppose this shameful crime,” he said.

Meanwhile, the pope sent a message the World Christian Life Community, which was holding its world assembly in Buenos Aires July 22-31, and was marking its 50th anniversary.

The association, which is inspired by Ignatian spirituality and integrates contemplation and action, works in solidarity with the poor and marginalized.

In his message the pope said contemplation and action go together “because we can only enter the heart of God through the wounds of Christ, and we know that Christ is wounded in the hungry, the uneducated, the discarded, the old, the sick, the imprisoned, in all the vulnerable human flesh.”

“To be guided by a Christian way of life, with a strong spiritual life and working for the kingdom, means letting oneself be shaped by the love of Jesus, having his same sentiments, asking oneself continuously: What have I done for Christ? What am I doing for Christ? What ought I to do for Christ?” he said.