Pope attends funeral of cardinal who announced to world his election 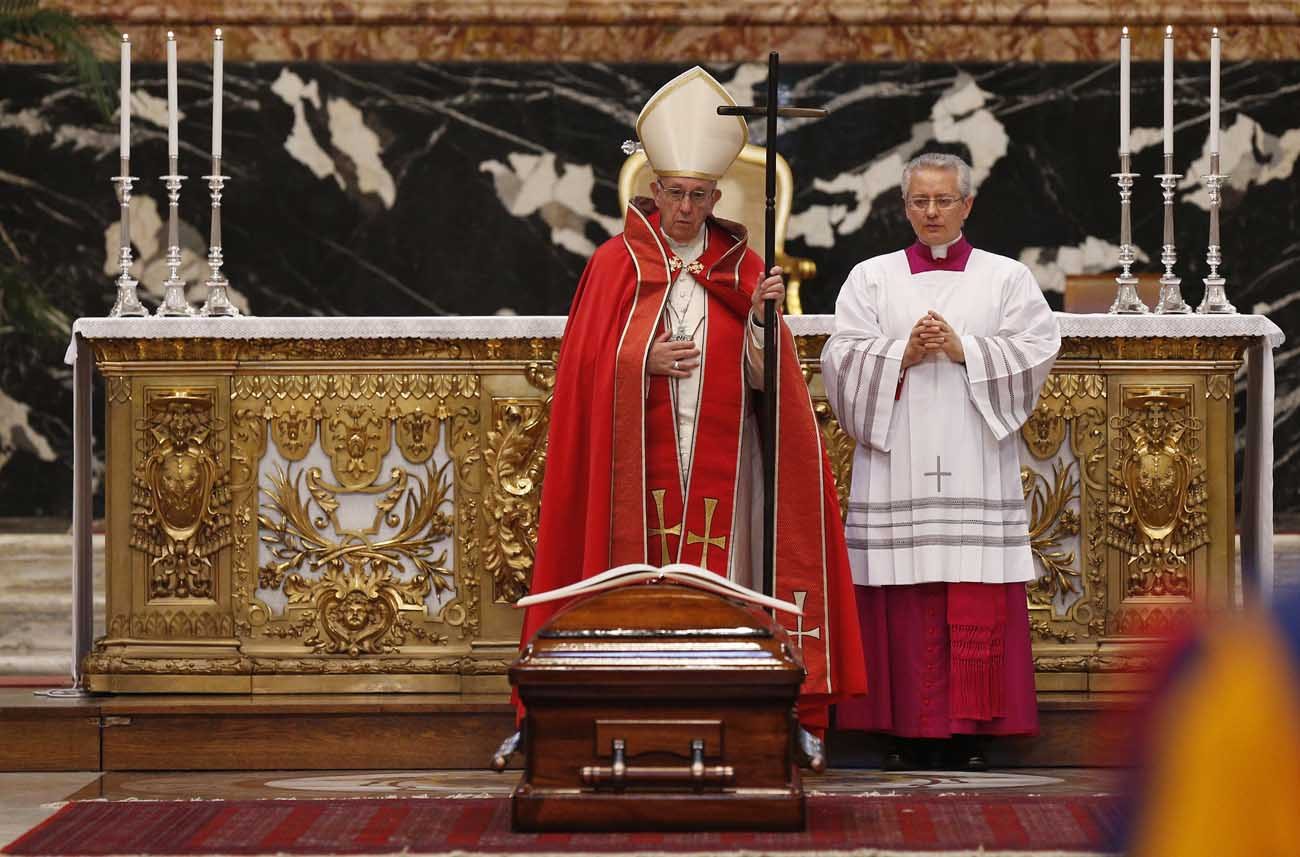 Pope Francis leads the rite of commendation during the funeral Mass for French Cardinal Jean-Louis Tauran in St. Peter's Basilica at the Vatican July 12. Cardinal Tauran, who announced the election of Pope Francis, had a long career as a Vatican diplomat and later worked on interreligious dialogue. He died July 5 at the age of 75 in Hartford, Conn. (CNS photo/Paul Haring)

VATICAN CITY (CNS) — Pope Francis attended the funeral Mass and presided over the final commendation of Cardinal Jean-Louis Tauran, the French cardinal who led the Vatican’s outreach to other religions and who had announced to the world his election as pope five years ago.

Seated to the right of the closed casket with his head bowed in solemn prayer, the pope attended the entire ceremony in St. Peter’s Basilica July 12. Typically, the pope arrives at the end of a cardinal’s funeral Mass to officiate over the rites of final commendation.

Pope Francis gave the final blessing, sprinkling with holy water and incensing Cardinal Tauran’s casket, upon which was laid an open book of the Gospels.

Members of the College of Cardinals, the diplomatic corps, Vatican officials, dignitaries and guests, including those of other faiths, gathered for the funeral of the late cardinal, who had spent more than 10 years as president of the Pontifical Council for Interreligious Dialogue and decades in the Vatican’s diplomatic service.

Members of the Sikh and Muslim communities, along with other mourners, paid their respects before the cardinal’s casket at the end of the service.

Cardinal Angelo Sodano, dean of the College of Cardinals and former Vatican Secretary of State, celebrated the funeral Mass. In his homily, he said he personally witnessed Cardinal Tauran’s “great apostolic spirit” after working with him for so many years.

The French cardinal courageously served the church, particularly through his illness, Cardinal Sodano said, and he was a living example of the beatitudes.

The poor in spirit, the meek, the merciful, the pure in heart, the peacemakers, “they are the beatitudes that will always shine on the life of our dear deceased brother like bright stars along his journey,” he said.

He said Cardinal Tauran also followed the path laid out by the Second Vatican Council in “Guadium et Spes,” which says that with God as the father of all of humanity, everyone is called to be brothers and sisters; therefore, “we can and we should work together without violence and deceit in order to build up the world in genuine peace.”

Cardinal Tauran, who had been living with Parkinson’s disease, died July 5 at the age of 75 in Hartford, Connecticut, where he had been receiving medical treatment.

In a telegram to the cardinal’s sister, who also attended the funeral Mass at the Vatican, Pope Francis had praised the cardinal’s “sense of service and his love for the church.”

Cardinal Tauran left a deep and lasting mark on the church, the pope said in the telegram July 5, noting the great trust and esteem in which he was held, particularly by Muslims.

An experienced diplomat and esteemed leader of the Vatican’s interreligious efforts, the cardinal had grabbed the world spotlight for his other role as the top-ranking cardinal deacon in 2013, appearing at the basilica balcony to announce to the world, “Habemus papam,” “We have a pope.”

His death left the College of Cardinals with 225 members, 124 of whom are under 80 and therefore eligible to vote in a conclave.

He was to be buried in his titular church in Rome, the Basilica of St. Apollinare alle Terme Neroniane-Alessandrine.

NEXT: Birth of an encyclical: Priest documents preparation of ‘Humanae Vitae’