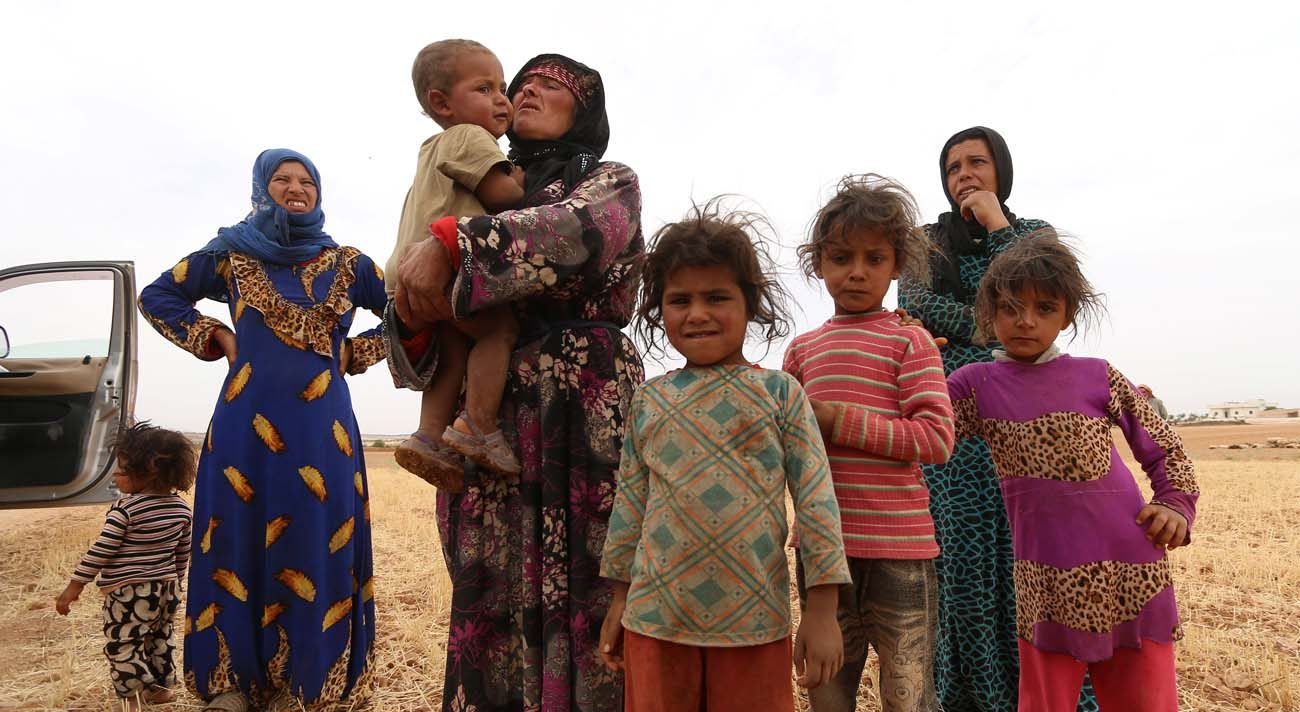 A displaced Syrian family who fled violence in Aleppo stands in a field in the rural area of Manbij in 2016. Amid the destruction in war-torn Syria, a community of Discalced Carmelites in Aleppo perseveres in its mission of continuous prayer and help to families in need. (CNS photo/Rodi Said, Reuters)

BEIRUT (CNS) — Amid the destruction in war-torn Syria, a community of Discalced Carmelites in Aleppo perseveres in its mission of continuous prayer and help to families in need.

The Carmelite nuns, four of whom are Syrian and two French, are in their quiet demeanor “a message of peace and a spiritual message of hope,” said the provincial of the Discalced Carmelite Fathers in Lebanon, Father Raymond Abdo, who visited the convent July 5-7.

The nuns’ convent on the outskirts of Aleppo, in an area that has often been a focal point of the fighting, once had a missile land in the yard. In seven years of civil war, the convent has suffered many food, water and electricity shortages, seen its windows shattered and a surrounding wall destroyed.

The sisters in the northern Syrian city are living a “very heroic situation, even if it’s difficult,” Father Abdo told Catholic News Service.

At one point, the nuns were hosting four uprooted Muslim families, who lived in a building adjoining the convent.

The nuns shared their food and the bounty from their vegetable gardens. Three families have since been resettled, and the convent is still supporting a family with 10 children.

Yet, the sisters have not lost their way of contemplative life, a structured routine that begins with silent prayer and includes Mass, working together in silence and more periods of prayer throughout the day and evening, Father Abdo said.

“They give a good example of real Christianity, because they don’t distinguish between Muslims and Christians,” he said.

A sister told Father Abdo how the head of one of the families who was sheltering at the convent approached her and asked, “Why do you help us?” The Muslim man then followed up with his observation, telling the religious, “You help us without asking anything in return. You Christians are very humble.”

“Giving this possibility to the Muslim people and other people to know the heart of Christianity” offers “real hope,” the priest said.

On the road from Homs to Aleppo, Father Abdo passed leveled villages, desolate and barren with “no sign of life anywhere.”

Some reconstruction is happening in Aleppo, with new roads being built, Father Abdo said, noting that the city’s residents “are trying to make a normal life.”

While walking outside the convent on the evening before his return to neighboring Lebanon, the priest heard a missile, “whooshing like a big plane overhead, heading in the direction of the Turkish area north of Aleppo.” Bombs could also be heard in the distance.

The sisters and other residents of Aleppo told Father Abdo that such activity is normal.

“Getting used to living like that means the people have suffered so much,” he said. “Still, they have the courage to go on.”

PREVIOUS: Learn from the past before looking to future, pope tells young people

NEXT: Nicaraguan bishops to pray for exorcism as violence continues