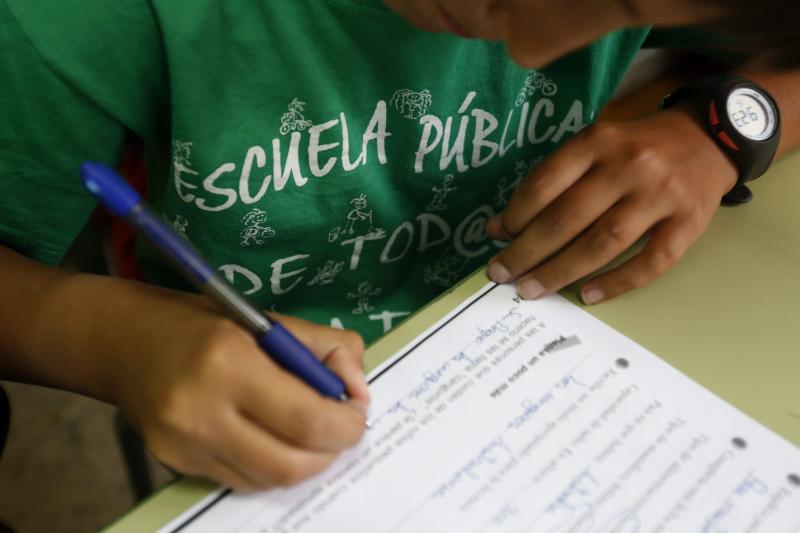 A student fills a school exercise at Joaquin Costa public school in Madrid. Spain's Catholic Church has voiced "deep concern" over plans by the government to curb religious teaching and re-examine past accords with the Vatican. (CNS photo/Javier Lizon, EPA)

A student fills a school exercise at Joaquin Costa public school in Madrid. Spain’s Catholic Church has voiced “deep concern” over plans by the government to curb religious teaching and re-examine past accords with the Vatican. (CNS photo/Javier Lizon, EPA)

OXFORD, England (CNS) — Spain’s Catholic Church has voiced “deep concern” over plans by the new government to curb religious teaching and re-examine past accords with the Vatican.

“It is necessary to remember the rights to religious freedom and education — these inalienable rights … are reflected in our constitution,” the executive committee of the Madrid-based bishops’ conference said in a statement.

“Religion must be given adequate consideration in the educational system, as required for the person’s integral formation — it cannot be replaced by state ethics imposed by public powers.”

The Spanish government said it plans to cut subsidies for Catholic schools and scrap religion as a school subject. The government said school religion would be replaced by a compulsory course on “civil and ethical values,” and state subsidies would be withdrawn from Spain’s mostly Catholic private schools.

But the bishops said the right of parents to “choose the educational model they want for their children” was enshrined in Spain’s 1978 constitution and guaranteed in 1979 agreements with the Vatican.

“The school must transmit truth in all its peculiarity and rationality, upholding freedom and respect for students,” Cardinal Canizares told a July 17 meeting at Valencia’s Catholic University.

“One of our society’s key problems is that it has stopped seeking and believing in the truth — but a tolerant society not based on truth soon heads toward intolerance,” he said.

However, the Spanish Confederation of Education Centers (CECE), whose 2008 Catholic member-schools represent 26 percent of the education system, said July 13 that public funding of Catholic education was “essential for rights,” and warned society was “tired of ideologizing the education debate.”

Archbishop Jesus Sanz Montes of Oviedo said July 13 he feared a “totalitarian dictatorship” was returning, and he accused the government of seeking “to control the truth by barring parents from educating their children.”

NEXT: Pulled from the sea, migrant’s rescue puts spotlight on Italian policy