Montco young adults deepen prayer, bond with others at retreat 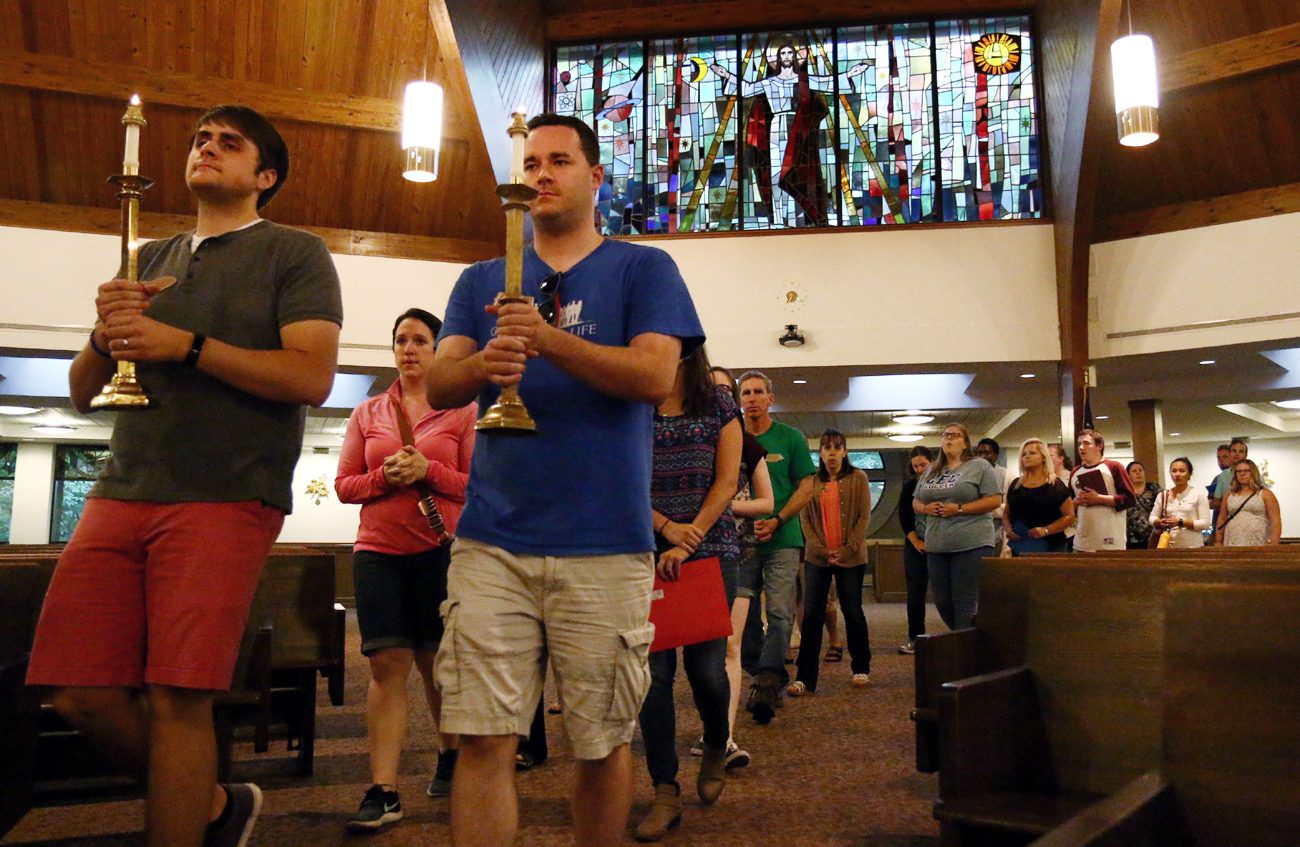 Bill Rose (left) and Rich Konowal serve as acolytes for the eucharistic procession Aug. 25 at St. Eleanor Parish in Collegeville, part of the day-long retreat for young adult Catholics in Montgomery County. (Photo by Dan McCarty)

About 40 young adults in the Metanoia Young Adults group in Montgomery County gathered on Saturday, Aug. 25 to socialize while going deeper into their faith during their seventh annual retreat at St. Eleanor Parish in Collegeville.

(See a photo gallery from the retreat here.)

Metanoia President Danielle Gallo, a member of Sacred Heart Parish in Havertown, described the months-long planning effort for the retreat that included finding a suitable date, obtaining permission to use parish buildings, finding a dynamic speaker, attracting young adults to share stories and coming up with a theme for the retreat.

Overall, Gallo was quite pleased with the turnout.

“We hit the ground running in a spiritual way,” she said. “I give a lot of credit to Mark.”

This year’s theme was “Listening to God’s Whispers” and according to Griswold, it’s about cultivating the inner life.

“God speaks to us every day in big and small ways,” he said. 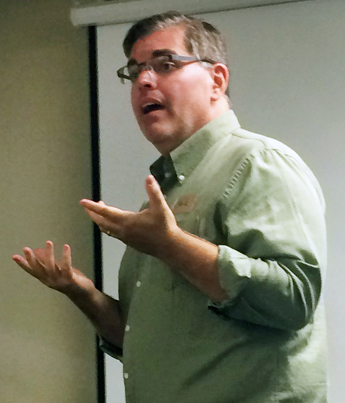 Griswold was asked to give the keynote address for this day as he and retreat coordinator Zac Moren have known each other since his days serving in youth ministry.

“It was nice to be invited by him,” said Griswold.

Moren opened the day with a prayer and reminded the participants, mostly in their 20s and 30s, that they should not let modern-day secularism interfere with spending time with the Lord, and that what God has planned for us is sometimes not what we want but we can always spend time with him.

The group was divided into four groups for small discussion and trivia questions. Topics included events in religious history, when and where Metanoia gatherings have taken place as well as archdiocesan information. There was also time to pray in song as Gallo led the group in worship music.

During his first talk, Griswold talked about listening to God’s whispers during loud times in life and in a challenging world. According to writer C.S. Lewis, God whispers to us in our pleasures, speaks to us in our consciousness and shouts to us in our pain. He speaks to us through normal, every day circumstances. We don’t always understand God’s will in the moment, and we must grow as his followers.

“We have the divine life inside of us,” said Griswold.

Through another small group discussion, several people shared their thoughts on how they like to pray and be with God. While some do that in a communal way, others believe it is easier to do so in a private setting through adoration with God, and God alone.

“You have to make sure you’re including him,” said Mollie Mares, a member of Metanoia’s leadership team and a parishioner of Mary, Mother of the Redeemer Parish in North Wales.

Additionally, some prefer to pray only through word and others will do so in song.

“The right song at the right time is incredible,” said Christina Kruzik, a member of Metanoia and parishioner of St. Eleanor’s. “God knows us.”

After lunch, there was time for reflection and many took the opportunity to go to confession. Griswold gave his second talk on the sacrament of reconciliation, mentioning that there is no condemnation for those in Christ. St. Paul’s Letter to the Romans says God does not condemn us and it is his will to save us.

“God’s Spirit will only speak words of encouragement,” said Griswold. “God is about restoring our relationship.”

Griswold also reminded the group of the parable of the Prodigal Son who went back to his father after realizing he sinned against heaven and his father. The son returned home expecting to now be treated like his father’s servants. However, the father was so happy that the son returned that he gave him a robe, shoes and a ring and celebrated with a feast, for he who was lost was found. When we go to confession, Griswold suggested, we are given the same graces that the son received from his father.

In his final talk, Griswold mentioned the various ways in which God speaks to us. We hear his word through the wisdom of the saints, through music, the beauty of creation, daily personal prayers and in silence where we can hear God’s voice. He stressed the importance of taking time away from modern distractions such as cell phones and social media.

“We just need to be holy men and women of God,” said Moren. “We need to do that through silence.”

A video presentation, “The Value of Silence,” was shown in which Father Mike Schmitz explains that God’s first language is to reveal himself through silence.

Though we may sometimes become distracted in prayer, Griswold said whatever is in our hearts gets exposed through silence. In that way, initial boredom in prayer can result in ultimate creativity.

Several people shared how they believe that God speaks to them as individuals.

“The best way God speaks to me is through circumstances of life,” said Rob Kluge of Villanova.

Abby Fisher of St. Norbert Parish in Paoli especially liked hearing about the wisdom of the saints. She believes that having a saint to look up to will help her grow in faith.

The Metanoia group attended a Saturday afternoon Mass and dinner followed. The retreat concluded with a eucharistic procession leading to adoration, after which a bonfire was held on the parish grounds at dusk. 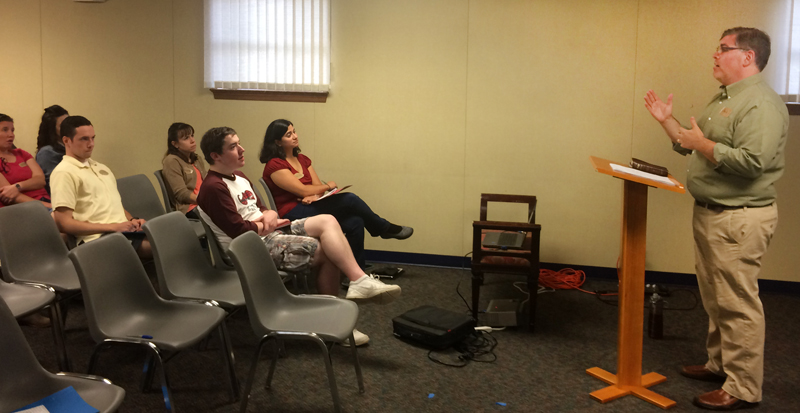 Young adults listen to one of two talks on prayer and Catholic spirituality by Mark Griswold at the Metanoia Young Adults retreat Aug. 25 at St. Eleanor Parish, Collegeville. (Photo by Dan McCarty)

NEXT: St. Edmond’s Home for Children wraps up summer in style