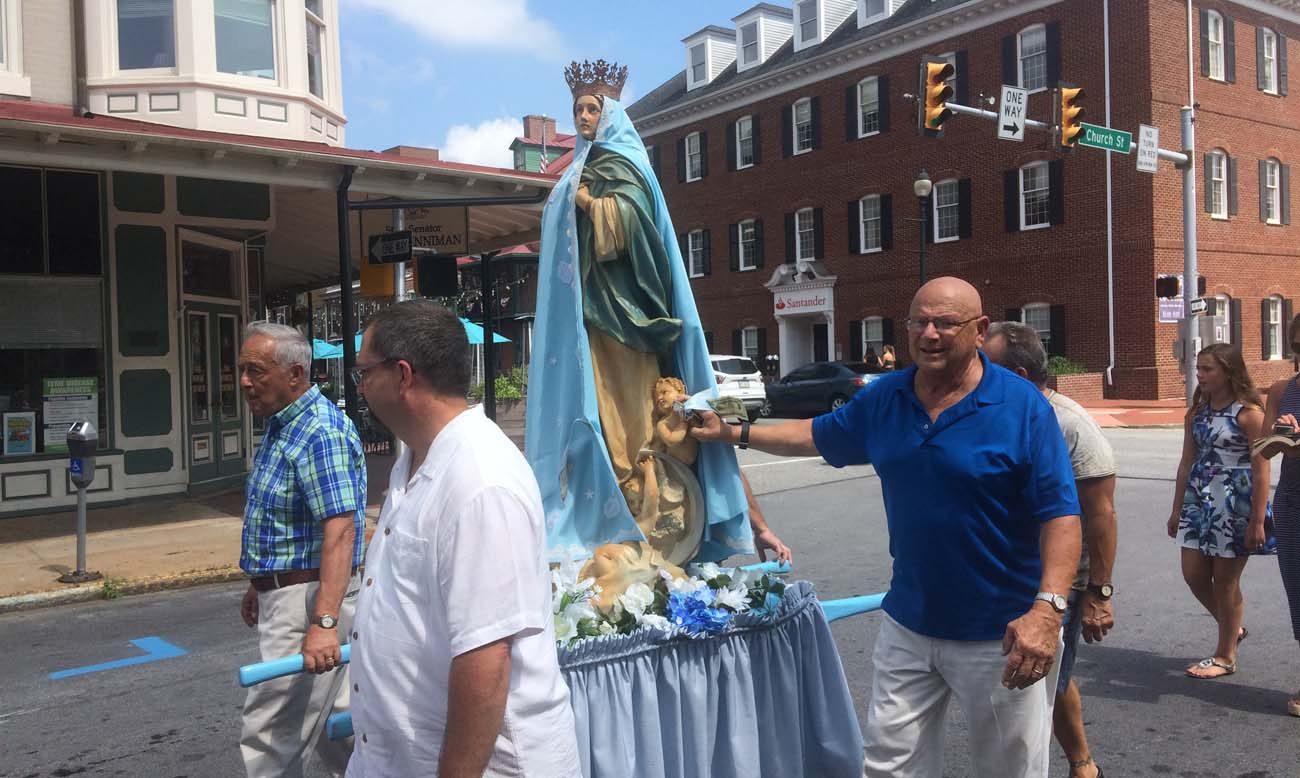 Members of the Assumption Day Parade Committee guide a statue of Mary for all to see at the 99th annual event held Aug. 12 in West Chester.

Parishioners of St. Agnes in West Chester and the surrounding community chose Sunday, Aug. 12 to honor the Blessed Virgin Mary and her assumption into heaven at the 99th annual celebration of the solemnity, observed in the church on Aug. 15.

The day began with morning Mass at St. Agnes Church, a communion breakfast at West Chester Country Club, then a public street procession and concluding benediction back at the church.

The annual event takes several months of planning to pull off smoothly. Last April a group of 14 committee members came together to start organizing the day. Their tasks included obtaining permits to use the West Chester streets for the procession and bringing together supporting members of our Lady’s Court as well as a statue of the Blessed Virgin.

(See a photo gallery of the celebration here.)

“We keep it going,” said Committee Chairman Anthony Polito. “We’re looking for new people. We decide what to do to make it bigger.”

The family of Sam Mobile, one of the original organizers of the celebration, has continued to participate three and four generations later. As every year, the Court includes a Queen of the Procession, and this year Mobile’s great-granddaughter, Alena Boyer of Wilmington, Del., held this special honor.

“It’s such an honor,” she said. “My great-grandfather started this. It means the world to me.”

Boyer’s older sister, Madison, was queen two years ago and her cousin, Maria Mobile of Coatesville who served this year as one of the eight attendants, hopes to someday have that privilege.

“I love it,” said Mobile, a member of Our Lady of the Rosary Parish, the Italian national parish in Coatesville. “It’s a blessing to be involved.”

It is also traditional for the Riccardo family to come out for the Assumption celebration. John and Nancy Riccardo are among the committee members and six of the attendants were their granddaughters.

“It feels good,” said John Riccardo, who has come for more than 70 years. “We fall in line and do our thing.”

Approximately 130 faithful people came out for this year’s event. It is not limited to parishioners of St. Agnes or to Catholics, as everyone is welcome. Beyond the opportunity to see friends and bring people together who might otherwise miss one another in the midst of summer vacations, some participants come just to pray to the Blessed Mother, knowing they can turn to her in time of need.

“It’s a community thing,” said Marie Mauro, a member of the Assumption Day Parade Committee. “Everyone can come.”

The Marian procession began at 2:30 p.m. outside St. Agnes Church on West Gay Street in West Chester with a statue of the Blessed Mother smiling down on all. It proceeded through the borough for a 30-minute walk before returning to the church.

In addition to the Court, several committee members pushed the statue on a cart. A few people led the group in songs to Mary. Members of the clergy including Father William Donovan, pastor of St. Agnes, were present along with others who simply walked the parade route.

“I’ve been involved for a long time and I’m still involved,” said Mary Lou Enoches, treasurer of the committee.

The afternoon concluded with a prayer service that included a presentation of flowers by the Queen and Court, and benediction of the Blessed Sacrament. It ended with the hymn, “Hail Holy Queen.”

At the service Father Donovan prayed that devotion to Mary would lead “to Jesus Christ, the Lord our God.”

With 99 years officially in the book, the committee hopes to begin planning soon for the centennial Assumption Day Parade.

“We want to try and do something nice,” said Mauro.

NEXT: Montco young adults deepen prayer, bond with others at retreat