Americans surveyed on views on ethics of genetically engineering animals 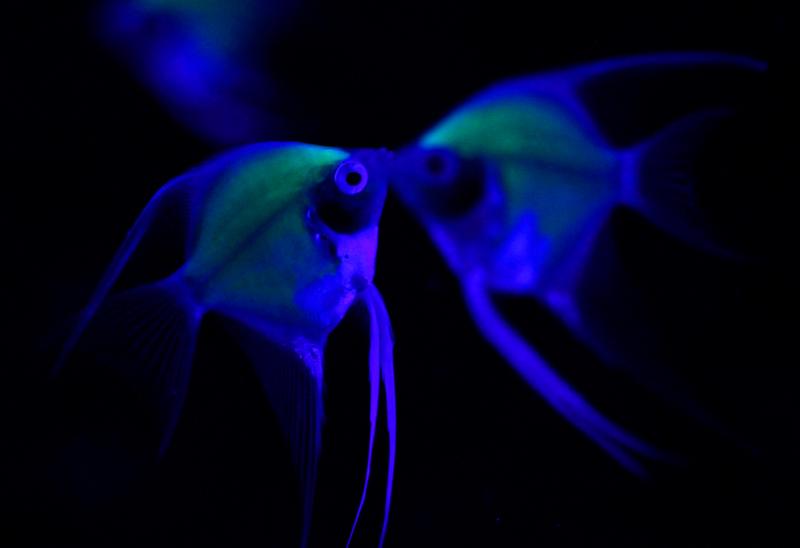 Genetically engineered Angelfish glow in a tank under a black light while being displayed at the 2010 Taiwan International Aqua Expo in Taipei. A Pew Research Center study released Aug.16 found that Americans’ view of genetically engineering animals varies widely based on the modifications’ intended purpose. Those low in religiosity are more likely to approve of such changes no matter how the technology is used. (CNS photo/Nicky Loh, Reuters)

Of the five ideas Pew proposed, genetically modifying mosquitoes to limit their reproduction and so halt the spread of disease was viewed favorably by 70 percent of respondents.

The 29 percent who viewed it unfavorably tended to cite concerns about “messing with nature/God’s plan” or concerns about the effects it could have on the environment. A smaller portion also expressed a general concern about unintended consequences.

Fifty-seven percent of respondents viewed using animals to grow organs and tissues for humans as a legitimate use of technology.

About 20 percent of those opposed listed each of animal welfare, messing with nature/God’s plan, and concerns about human health as a reason that they were opposed.

“In manufacturing organs, the existence of these animals would be miserable,” said one respondent. “When you mix human and nonhuman genetics I believe that will cause extreme problems down the road,” said another.

Forty-three percent approved of modifying animals so that they would produce more nutritious meat.

Thirty-two percent approved of genetically modifying a closely related species to bring back an extinct animal. Twenty-eight percent of those opposed cited concerns about potential damage to the ecosystem, 23 percent cited messing with nature/God’s plan, and 14 percent said that reviving extinct animals is an unnecessary waste of resources.

One respondent in the first group said, “Consider the problems man has created by reintroducing species that have become extinct (in) a given area, i.e., wolves and mountain lions to areas now occupied by humans and domestic livestock.”

Four percent of those opposed were concerned about a “Jurassic Park” scenario.

Only 21 percent approved of modifying aquarium fish to glow in the dark, even though fish modified in this way are already commercially available. Forty-eight percent of those who were opposed said that it was not needed or a waste of resources.

The margin of error for the whole sample group of 2,537 U.S. adults who were surveyed was plus or minus 2.8 percentage points.