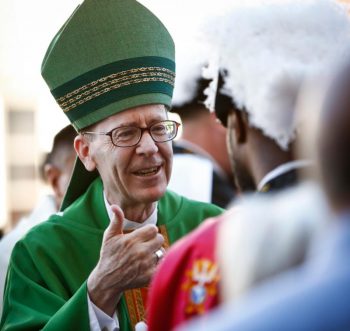 Pope Francis has appointed Phoenix Bishop Thomas J. Olmsted as the apostolic administrator “sede plena” of the Byzantine Catholic Eparchy of Phoenix. He will reman bishop of the diocese. Bishop Olmstead is pictured in a 2016 photo. (CNS photo/Nancy Wiechec)

The appointment by Pope Francis was announced Aug. 1 in Washington by Archbishop Christophe Pierre, Vatican nuncio to the United States.

Bishop Olmsted, who remains the head of the Phoenix Diocese, said that the current head of the eparchy, Bishop John S. Pazak, remains in place.

Originally based in Van Nuys, California, the Byzantine eparchy first transferred its offices to Phoenix and later adopted Arizona’s largest city as its base.

In an Aug. 1 statement, Bishop Olmsted indicated a legal dispute among Eastern Catholics in the United States was the reason for his appointment as apostolic administrator “sede plena,” which he said is “for the time being” until the matter is resolved.

The appointment “has not come about because of any personal misconduct of any kind on the part of Bishop Pazak. Indeed, Bishop Pazak remains as the bishop of this eparchy,” Bishop Olmsted said.

“However, over the past year, there have been some disagreements about administrative matters within the Byzantine Ruthenian Church here in North America, of which the Eparchy of Phoenix is a part,” he added. “Because of some unfortunate legal developments in these matters, their resolution has been unnecessarily complicated, which have unintentionally endangered the peace, unity and communion within the Eastern Catholic Church.”

His appointment as apostolic administrator was made to “facilitate the task of resolving these legal matters, and to support the efforts on everyone’s part to build up the communion within among the other eparchies of the Eastern Catholic Church,” Bishop Olmsted said.

He added there is no fixed term to his appointment.

The eparchy has 19 parishes and one mission over the 13 western states in its territory: Alaska, Arizona, California, Colorado, Hawaii, Idaho, Montana, Nevada, New Mexico, Oregon, Utah, Washington and Wyoming.