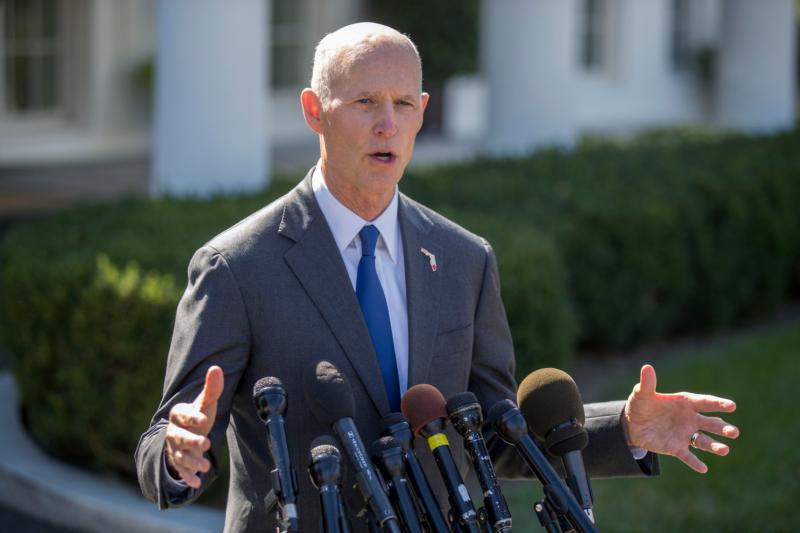 Florida Gov. Rick Scott is pictured at the White House in Washington Sept. 29, 2017. In an Aug. 9 letter to the governor on behalf of the Catholic bishops of Florida, Michael Sheedy, executive director of the state’s Catholic conference, appealed to Scott to commute the death sentence for Jose Antonio Jimenez to a life sentence without parole. (CNS photo/Shawn Thew, EPA)

TALLAHASSEE, Fla. (CNS) — The Catholic bishops of Florida urged to Gov. Rick Scott to commute the death sentence of Jose Antonio Jimenez to a life sentence without parole.

Jimenez is scheduled to be executed Aug. 14 at 6 p.m. local time for the 1992 murder of Phyllis Minas.

“Both victims of crime and offenders are children of God and members of the same human family,” said an Aug. 10 letter to Scott on behalf of the bishops by Michael B. Sheedy , executive director of the Florida Conference of Catholic Bishops in Tallahassee.

“We appreciate your difficult task as governor and still must ask you to commute this death sentence, and all death sentences, to life without the possibility of parole,” he said.

Sheedy cited Pope Francis’ announcement Aug. 2 that he had ordered a change in the Catechism of the Catholic Church declaring that the death penalty is inadmissible in all cases.

“This reflects the growing awareness that the dignity of the person is not lost even after the commission of great crimes and that more effective forms of detention have been developed to ensure the due protection of citizens without definitively depriving the guilty of the possibility of redemption,” said Sheedy.

“We pray for Ms. Minas and for consolation for her loved ones. All of us are called to stand with victims in their hurt as they seek healing and justice,” he said.

As Floridians gather in prayer for Minas, her family and friends, “and all affected by violent crime,” Sheedy said, “we also invite them to pray for you as you consider this request. We pray also for Mr. Jimenez and all those facing execution.”

Prior to Jimenez’s scheduled execution, Catholic faithful and members of the community will gather across the state to pray for the victims of violent crimes and their families, for those on death row, for Governor Scott as he confronts the decision to proceed with the execution, and for an end to the use of the death penalty.

NEXT: Discalced Carmelites use time-honored skills to construct new monastery