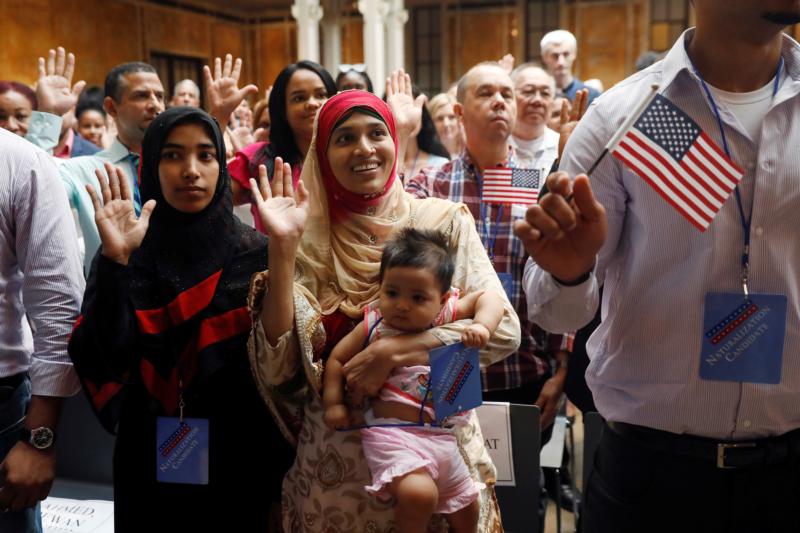 New citizens stand during the Pledge of Allegiance in early July at the U.S. Citizenship and Immigration Services naturalization ceremony in the Manhattan section of New York City. The U.S. Census Bureau is proposing the inclusion of questions about citizenship status in the 2020 census. (CNS photo/Shannon Stapleton, Reuters)

WASHINGTON (CNS) — A U.S. Commerce Department decision that a question about citizenship status be included on the 2020 census has its fair share of critics and has prompted lawsuits.

The critics say such questions might make people less likely to participate in the census, especially members of immigrant communities.

“The faith community has powerfully spoken up against the unjust, dangerous addition of a citizenship question to the 2020 census. Everyone counts, and faith leaders are organizing to make sure our government recognizes this,” said Sara Benitez, the organizing director of Faith in Public Life.

The Census Bureau set about adding this question in response to a letter from the Department of Justice. The DOJ said it wants to ask everyone living in the United States whether they are citizens to help it enforce the Voting Rights Act.

“The department (DOJ) needs a reliable calculation of the citizen voting-age population in localities where voting rights violations are alleged or suspected … the decennial census questionnaire is the most appropriate vehicle for collecting that data,” the DOJ letter says.

Having the citizenship data is important because “multiple federal courts of appeals have held that, where citizenship rates are at issue in a vote-dilution case, citizen voting-age population is the proper metric for determining whether a racial group could constitute a majority in a single-member district,” according to the letter.

The letter admits that the DOJ can get some of this information from the American Community Survey, which is sent to about 300,000 households each month and collects far more information than the census, but the DOJ believes that this survey’s data is not precise enough. In addition, the DOJ wants the data from the Census used in redistricting to be the same data used in enforcing the Voting Rights Act with regard to those districts.

Other critics of the proposal include the Leadership Conference on Civil and Human Rights, which said in an open letter to Commerce Secretary Wilbur Ross that “adding a new citizenship question to the 2020 census would destroy any chance for an accurate count, discard years of careful research and increase costs significantly.”

In addition, many states, cities, towns, and other organizations are bringing lawsuits against the Trump administration in an attempt to keep the citizenship question from the census.

The lawsuit brought by Xavier Becerra, California’s attorney general, says that “the state of California, in particular, stands to lose if the citizenship question is included on the 2020 census. … Under-counting the sizeable number of Californian noncitizens and their citizen relatives will imperil the state’s fair share of congressional seats and Electoral College electors and will cost the state billions of dollars in federal funding over the next decade.”

During a public comment period, which closed recently, the Census Bureau received more than 39,000 comments about the citizenship question.

A U.S. Census Bureau memo noted that Center for Survey Measurement research has “noticed a recent increase in respondents spontaneously expressing concerns about confidentiality” and that Spanish-speaking focus groups “brought up immigration raids, fear of government, and fear of deportation.”

Arabic- and Chinese-speaking focus groups expressed similar fears. Members of all groups recommended that the Census Bureau make it clear that none of the data it collected would be shared with U.S. Immigration and Customs Enforcement or other law enforcement agencies.

The U.S. census is established in Article I Section 2 of the Constitution, which reads in part:

“The actual enumeration shall be made within three years after the first meeting of the Congress of the United States, and within every subsequent term of 10 years, in such manner as they shall by law direct.”

The most recent census, conducted in 2010, asked four questions about the household and six about each individual person part of the household. It was, however, shorter than the long form of censuses from 1940 through 2000.

The long-form census, which was sent to one in six households, has been replaced by the American Community Survey.

A question about citizenship is not new on the census, although it has not been asked since 1950.

The 1820 and 1830 censuses asked about the number of foreigners not naturalized in each household, and the 1870 census and all censuses from 1890 to 1950 asked about each person’s naturalization status.