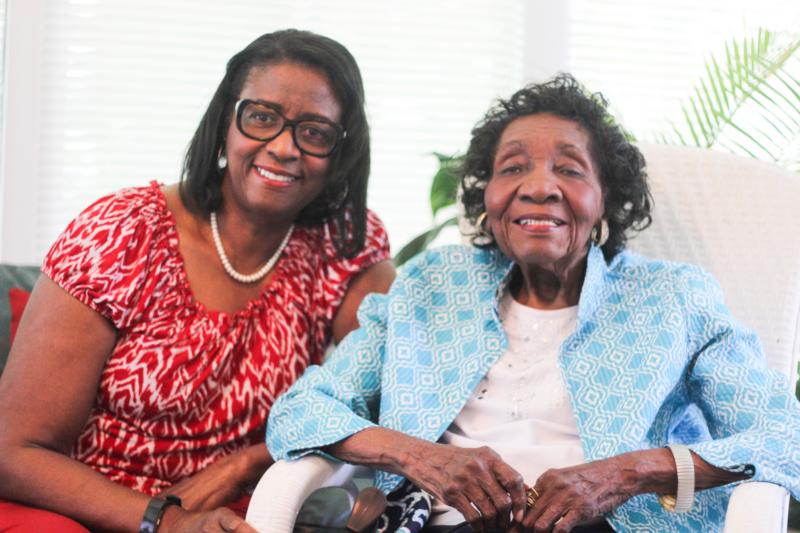 COLUMBIA, S.C. (CNS) — Vashti Jackson Woodson does not hesitate when asked how she feels about her 100 years of life.

“I’m happy about everything!” she said. “My life has always been happy from the beginning up until the present. I’ve had a wonderful life!”

Her words are accompanied by a radiant smile that lights up her entire face. It is the kind of smile that also lights up a room and brightens the day of anyone who sees it.

That kind of positive outlook, along with a strong faith in God, has carried Woodson through the years to the upcoming celebration of her milestone centennial birthday Aug. 25.

Woodson is being honored by her large family, friends and her church family at St. Martin de Porres Church, where she has been a devoted member for more than 75 years.

She was born and raised in Columbia, the youngest of five children. She is a graduate of the former Booker T. Washington High School, and also attended Benedict College, Midlands Technical College, and the University of South Carolina, all in Columbia.

She attended Protestant churches as a child but studied to become Catholic before her marriage. She and her late husband, David Woodson, were married at St. Martin de Porres Oct. 9, 1940, the first Catholic couple married there. Her family recalls that the ceremony was held very early in the morning because David then had to go to work.

The couple had six children, four daughters and two sons, all of whom went on to successful careers. Woodson has 12 grandchildren and 12 great-grandchildren.

Through the years, the church would be one of the beloved constants of Woodson’s life.

She sent her children to St. Martin de Porres School and was involved in the parish on many different levels. She served as church secretary for almost 20 years, sang in the choir, taught religious education, was an extraordinary minister of Holy Communion, served on the parish council, worked in the soup kitchen and visited the sick. She also served as president of the Rosary Altar Society for many years, was president of the Midlands Deanery, and honored as Woman of the Year.

Well into her 80s, Woodson also worked as a substitute teacher in Richland County schools and served as a Girl Scout leader.

One of her biggest joys over the years was becoming godmother to many children and adults in the parish, and helping them find their way to a strong Catholic faith.

Parishioner Edward Sutton is one of her godsons and has a special place in his heart for the woman who helped bring him into the Catholic Church.

“She is the best Christian woman I have ever met,” Sutton told The Catholic Miscellany, newspaper of the Diocese of Charleston. “She loves and understands what love is about.”

Woodson now lives in Columbia with daughter Veronica Ramseur. Poor eyesight has slowed her down only a little. She said she misses some favorite pastimes, like reading and gardening, but her life is vibrant and active, filled with visits to family and friends. She attends Mass at St. Martin de Porres every Sunday, sitting in the same pew each week, and belongs to the Senior Savvy Club at the church.

Ramseur said her mother’s mind is as keen as it ever was, and she still carries on her family reputation for being a sharp dresser.

“She has lived a good life and raised a good Christian family with good moral values, and we, as her children, are continuing that tradition,” Ramseur said.

When possible, Woodson also still travels — something which has been a constant in her life for decades and created some of her fondest memories. Her son Lt. Col. Anthony L. Woodson, who retired from the U.S. Air Force, recalled that she frequently made trips to visit him and his family at his various posts around the U.S., plus an overseas trip to Italy.

“One of my most revered memories was when she was part of my son’s Boy Scout camping trip to the Tuscany region in central Italy,” he said. “Needless to say, my family and the other campers enjoyed her stories around the campfire. She has always been an eager traveler and fully engaged with my family and with me.”

As she sat with bright sunlight streaming in on her on a recent afternoon, Woodson said the secret to living a long life can be summed up in one word: love.

“Be happy every day, love the Lord and love your neighbor!” she said.