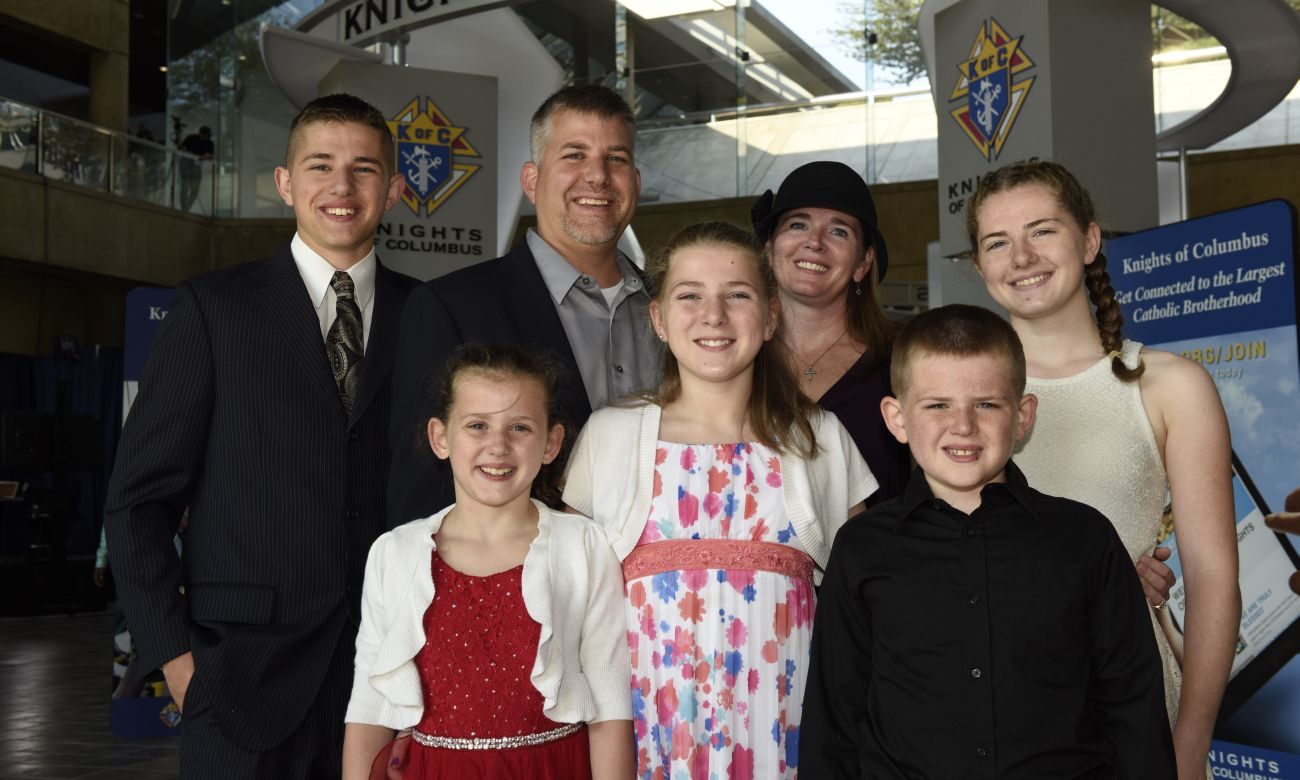 The Youngs of Poughkeepsie, N.Y., are the Knights of Columbus Family of the Year at the Baltimore Convention Center. Members of the family, honored Aug. 8, are from left, Christopher, 17; Mary, 9; Ryan, the father; Grace, 12; Elizabeth, the mother; Justice, 8; and Trinity, 15. The family also includes Faith, 2, and Xavier, 5 months. (CNS photo/courtesy Knights of Columbus)

BALTIMORE (CNS) — A little more than two decades after they met at an ice cream social on the second day of class at Franciscan University of Steubenville in Ohio, Ryan and Elizabeth Young head the Knights of Columbus International Family of the Year.

With five of their seven children in tow, the parishioners of St. Martin de Porres Parish in Poughkeepsie, New York, accepted the honor Aug. 8, day two of the Knights 136th annual national Supreme Convention at the Baltimore Convention Center. The theme of the Aug. 7-9 convention was “Knights of Charity.”

It was the second straight week in which the Youngs had their minds on Maryland.

They’re the founders of Camp Veritas, a summer camp for Catholic high school students that began in 2008 in New York, spread to locations in Ireland and Florida, and spent the week of July. 29-Aug. 4 at Summit Lake Camp in Emmitsburg.

“We were getting a lot of kids from the South, enough to consider another location, and I had attended Mount 2000 on a number of occasions,” Ryan Young explained, referring to the retreat for high-schoolers sponsored by the seminarians of Mount St. Mary’s. “I saw Emmitsburg and the fire that had already started there.

“We had 305 souls in Emmitsburg last week, including 70 staff,” he told the Catholic Review, the news outlet of the Baltimore Archdiocese.

The camp began at Camp Lakota and has since grown to also include Mount St. Mary College in Newburgh, New York; Lake Placid Camp and Conference Center in Lake Placid, Florida; and Clongowes Wood College in County Kildare, Ireland.

Like his wife, who is an assistant professor at Marist College, Young is a physician’s assistant. They are the parents of Christopher, 17; Trinity, 15; Grace, 12; Mary, 9; Justice, 8; Faith, 2; and Xavier, 5 months.

In addition to Camp Veritas, Young, 41 serves as the director of the Fearless Retreat Program, hosted by Catholic high schools in the Archdiocese of New York.

Young began the camp before he joined Knights Council 7551 in Poughkeepsie, which supports both of his signature outreaches. In addition to running his parish blood drive, he’s involved in council efforts that include Food for Families, Habitat for Humanity and Coats for Kids.

With a demanding job and a large family, where does he find the inspiration and time to be involved hands-on with so many different philanthropies?

“If I’m not going to do it, then who should I expect to do so?” Young said, turning around the question. “The Lord, when you hear his voice, it can be a persistent one.”

NEXT: Greensburg Diocese apologizes in document ahead of grand jury report