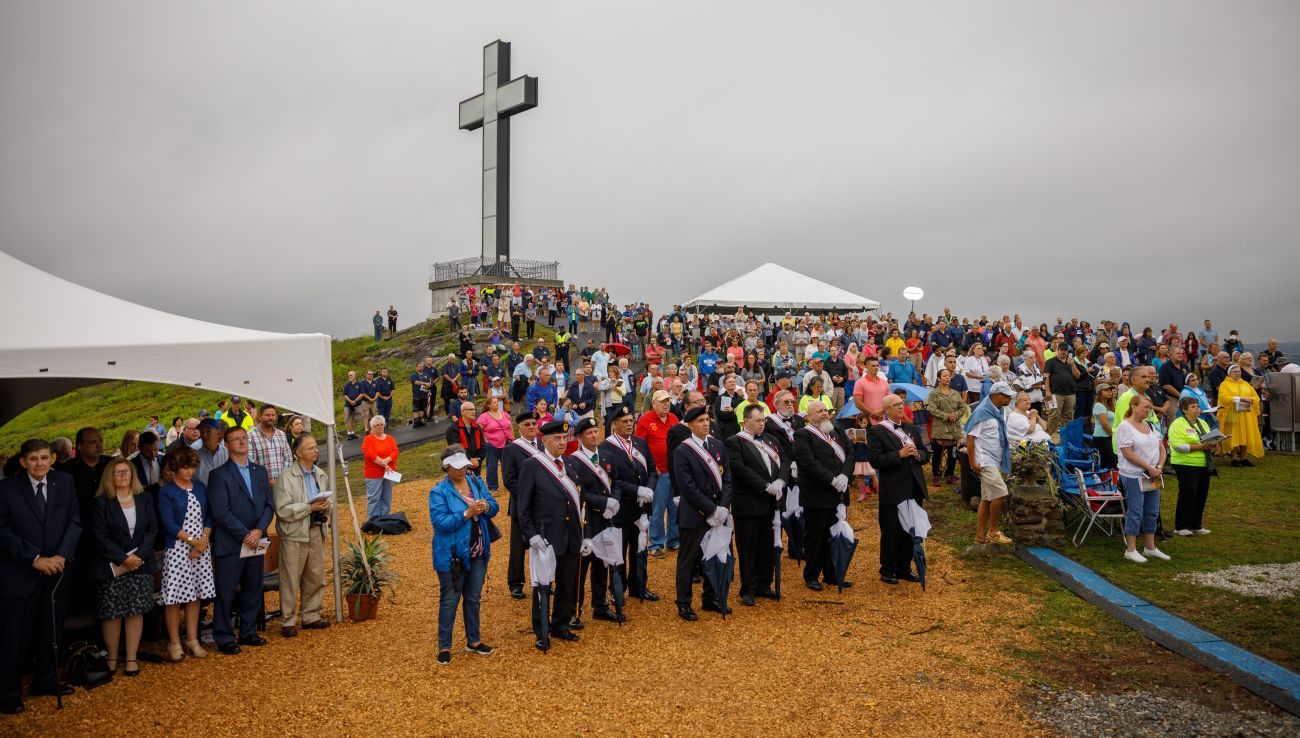 People stand near a 60-foot illuminated cross Aug. 12 at Holy Land USA, a former theme park in Waterbury, Conn., during a Mass honoring sainthood candidate Michael McGivney, founder of the Knights of Columbus and a native of Waterbury. The cross can be seen for miles from the highways. (CNS photo/Aaron Joseph, for The Catholic Transcript)

WATERBURY, Conn. (CNS) — More than 1,000 people gathered in the rain on top of Holy Land USA as Archbishop Leonard P. Blair of Hartford celebrated Mass to honor Father Michael McGivney, a candidate for sainthood, founder of the Knights of Columbus and a native of Waterbury.

The faithful came from across the state for the “Mountaintop Mass” on Pine Hill at the former religious theme park, known for its 60-foot illuminated cross, which can be seen for miles from the highway.

The hilltop offers a view of the places where Father McGivney was born, baptized and educated, and was buried for 92 years until his remains were moved to the Church of St. Mary in New Haven, where he began the Knights of Columbus.

In the early afternoon, people began gathering on the hilltop, many of them shuttled to the top in golf carts on the repaved roads. They sat under tents and umbrellas in the area of the large cross that looks out over the city. They prayed the rosary and listened to praise and worship music. Although rain fell throughout the day, it didn’t dampen their spirits.

Archbishop Blair concelebrated the Mass with 13 priests and three deacons on a covered stage that had a large banner proclaiming, “Welcome to Holy Land USA,” while above them, swallows swooped through the air in joyful flight.

Looking out at hundreds of people on the hillside, huddled under colorful umbrellas, he said, “My brothers and sisters, what a powerful thing it is for us to be gathered on this holy mountain in Waterbury, just as Christ taught the people on the mountain in today’s Gospel.”

He urged them to bring the message of the Holy Land USA Mass to others and evangelize Catholics who no longer practice their faith or who walk away from it because of “the many hard sayings of Jesus that the church proclaims in fidelity to the Gospel.”

He said, “This cross that is lit up every night is a powerful spiritual reminder to everyone of the importance of God in a world where people are absolutely forgetful of God, sometimes not deliberately, but because they’re so consumed by the things of this world. How important it is for the cross to be shining brightly on this mountain.”

Archbishop Blair said that when he first arrived in Connecticut, he made a donation to Holy Land USA and was given a tile, like other donors, on the newly erected cross. For his inscription he chose “Ave crux, spes unica” (“Hail to the cross, our only hope”).

The organizers of the so-called Holy Land Mountaintop Mass believe the event will cause a revitalization of faith and increased devotion to the founder of the Knights of Columbus.

The event was the brainchild of Father James Sullivan, pastor of the Church of the Assumption in Ansonia, in collaboration with the Knights and Holy Land USA, which owns the park.

“This was a significant religious event for the city and the state, in the spirit of the new evangelization,” said Father Sullivan. “It was a celebration of Holy Land and Father McGivney’s life and legacy.”

“The Holy Spirit was present today,” he said as he stood beneath the 60-foot cross and gazed out at the city below. “I believe something truly wonderful is going to come from this and that it will reignite the faith in many people.”

Father Sullivan, who like Father McGivney grew up on the banks of the Naugatuck River, said: “Being born in Waterbury, I can recall as a young boy when all the churches were filled. The spiritual climate of the world has diminished with many forces pulling us away from our devotion to God. Our prayer is that he be found again. By God’s grace, Holy Land will help to reignite that flame of love.”

Brian Caulfield, vice postulator for Father McGivney’s cause for sainthood and a member of the Knights, said he hopes the Mass will inspire increased devotion to the priest.

“Waterbury is Father McGivney’s hometown, and people recognize him as a holy man who grew up in their midst,” he said. “The Knights wanted to bring people together to pray and raise his profile around Connecticut. I’m sure he has a special place in his heart for Connecticut Catholics. We ask people to pray to him in a time of need.”

Caulfield estimated that since the priest’s cause for sainthood began in 1997, there have been more than 1,000 favors granted to people who prayed for Father McGivney’s intercession. He was declared “venerable” in 2008 by Pope Benedict XVI.

In general, canonization requires two miracles that are verified as the result of the intercession of the sainthood candidates; one is needed for beatification and the second for canonization.

Pisani is a longtime columnist for The Catholic Transcript, newspaper of the Archdiocese of Hartford.