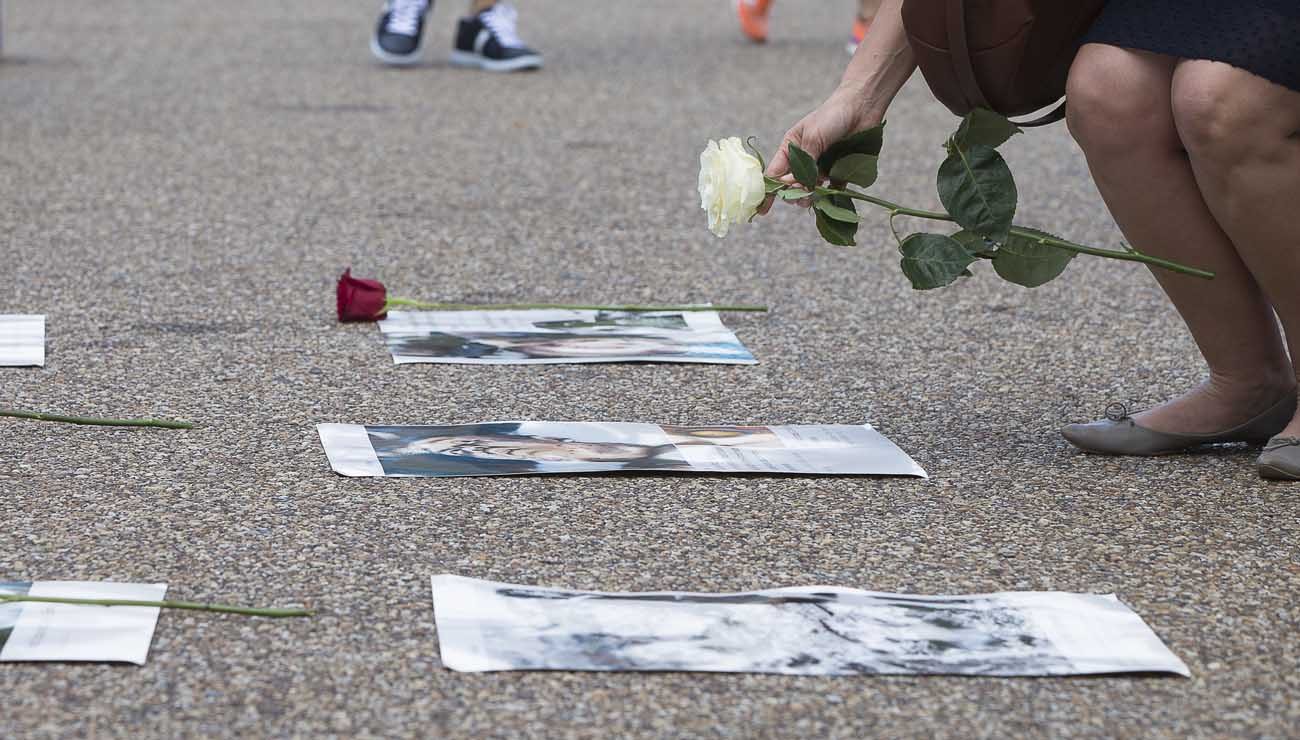 A woman places a rose on the photo of an atomic bomb victim in Washington during a Catholic prayer service of repentance near the White House Aug. 9 for the use of nuclear weapons on Japan during World War II. The atomic bomb was dropped on Nagasaki Aug. 9, 1945. Hiroshima was hit three days earlier. (CNS photo/Tyler Orsburn)

WASHINGTON (CNS) — About 30 people from various Catholic organizations came together outside the White House for a prayer service of repentance Aug. 9 for the use of nuclear weapons on Hiroshima and Nagasaki, Japan.

At the rally, which lasted about an hour, they called for the United States to apologize and repent of its use of nuclear weapons in the Second World War and for total nuclear disarmament.

The atomic bomb was dropped on Nagasaki Aug. 9, 1945, and three days before that Hiroshima was bombed. The peace activists held a similar prayer service of repentance at the Pentagon Aug. 6 in a protest area designated by police.

The Aug. 9 event opened with a speech explaining that those there stood with other anti-nuclear movements around the world, including the Kings Bay Plowshares group, which trespassed at a naval submarine base to protest nuclear weapons.

The rally featured several pictures of the damage caused by nuclear weapons, both to people and to the buildings in Hiroshima and Nagasaki.

One mentioned in a poem by the late Jesuit Father Daniel Berrigan shows a “shadow on a rock.” A person was on the steps outside a museum when the bomb went off, and because the person was so close to the center of the blast all that was left was a person-shaped shadow against the steps.

Everyone gathered read an apology stating that “we apologize to the people of Japan and to the survivors of the bombing, the ‘hibakusha,’ for our country’s bombing of Hiroshima and Nagasaki, and we ask forgiveness for these atrocities.”

The apology also decried the United States’ refusal to move away from nuclear weapons.

“Nuclear weapons are sinful and idolatrous. Their research, production, possession, deployment and use are a crime against God and humanity,” it said. “We decry the fact that the U.S. government plans to commit a trillion dollars to modernize its existing nuclear arsenal over the next 30 years.”

A speech by the mayor of Hiroshima also was read, in which he exhorted those present to imagine themselves at the scene and imagine, among other things, the cries of children for their mothers, begging for water and relief from the heat.

Shizuko Nagashima, a Japanese woman who has been living in the United States for the last 30 years, sang an “A-Bomb Survivor’s Song” in Japanese, which provided an outline of the fate of the destroyed cities.

“Old village has burned to the ground/ All around bones whitened and burned/ Now there are white flowers blooming,” part of it went.

The assembly said prayers during the event, both as part of a litany of repentance — “For the countless Japanese A-Bomb survivors who have suffered and died from the effects of nuclear radiation, forgive us, O God” — and impromptu prayers from those who had gathered.

Among the prayers offered up by people were those in thanksgiving for the examples of the Rev. Martin Luther King Jr. and Dorothy Day, co-founder of the Catholic Worker Movement An elderly man who said that he had helped build nuclear weapons offered a prayer of his own for peace.

Since it was the day on which both Blessed Franz Jagerstatter and St. Edith Stein were martyred, their intercession was sought and summaries of their lives were read.

Blessed Franz Jagerstatter was an Austrian man and a father who was a conscientious objector to service in the Nazi military. As a result, he was convicted of undermining military morale and sentenced to death in Germany.

St. Edith Stein was raised Jewish, converted to Catholicism and became a Discalced Carmelite. She was arrested and died in the gas chambers at Auschwitz in Poland.

The rally ended with the group singing “I Come and Stand at Every Door,” which has a message from a seven-year-old girl who died at Hiroshima begging for peace.

NEXT: Metuchen bishop ‘saddened and ashamed’ by Archbishop McCarrick case