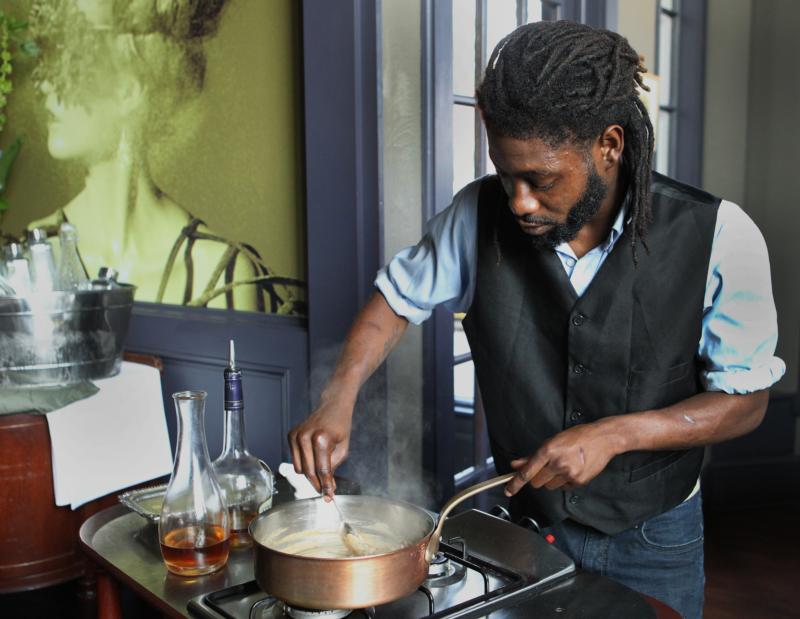 CLEVELAND (CNS) — Joe Dawson is learning that there’s a skill to cutting celery and it begins with how the chef’s knife is held — not by the handle but firmly above the sharpened blade.

Using a rocking motion, he carefully practices cutting long stalks into 1/4-inch pieces, making sure to keep a good grip so the cuts are clean and without strings.

“It’s challenging. It’s challenging in a good way,” Dawson, 44 and dressed in a traditional chef’s white jacket, told Catholic News Service before the start of a mid-August shift at the French cuisine restaurant that trains former prison inmates for culinary careers.

Beginning in May, Dawson had been “in the front of the house” at Edwins, honing his hospitality skills by welcoming guests, serving meals and learning how to anticipate diners’ needs. For the next three months, he’ll be in back — meaning the kitchen — learning how to cook classic French dishes, pair wine with cheeses and move almost effortlessly among the dozen or so chefs-in-training in tight, almost chaotic surroundings.

Edwins — short for education wins — is a venture of Brandon Chrostowski, 38, a no-nonsense, hard-driving entrepreneur who saw a need to help people released from prison. He envisions eventually that Edwins will host the country’s best culinary school and provide well-trained chefs and servers to the city’s burgeoning local food scene.

It’s people like Dawson whom Chrostowski sees as valuable assets to the community. Dawson returned home to Cleveland in April after spending 11 years in a West Virginia penitentiary following his conviction in connection with the death of a man he assaulted. Dawson said he was looking for a fresh start and Edwins is providing it.

Chrostowski explained to CNS that his undertaking is about giving people a second chance, like the one he received as an 18-year-old in his hometown of Detroit.

Chrostowski’s story begins with his arrest for drug possession and fleeing police soon after high school graduation. He faced a 10-year prison sentence, but in court, the judge gave Chrostowski probation rather than time behind bars. He said the new chance he received is something that African-Americans and Latinos who enter the U.S. criminal justice system rarely get.

“First, it’s about fair and equal opportunity regardless of your past,” Chrostowski explained about his reason for helping people now out of prison. “When we take a student in here, we don’t ask about previous offenses or education level. It’s about moving forward. I was never looked upon in a different way when I was getting out of where I had to get out of. 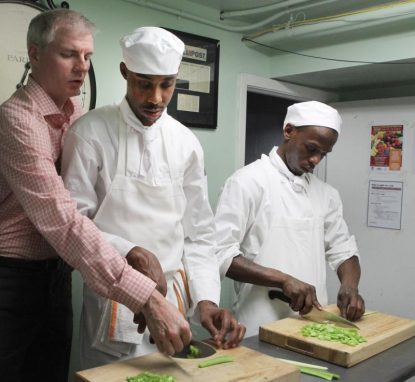 “Two, is this idea that hard work doesn’t have a language. If you work hard, it’s universal.”

To a certain extent, he added, Edwins is rooted in the biblical call for justice for people on society’s margins. Chrostowski credited his grandmother for making sure he went to Mass on Sundays in Detroit after his arrest. He continues to practice the Catholic faith at Our Lady of Peace Parish in Cleveland with his wife, Catana, and their children, Leo, 3, and Lilly, 1. Chrostowski finds comfort in the Book of Genesis and its stories of beginnings.

Edwins welcomes students into its six-month program after thorough screening and an interview to determine their desire to succeed. Through August, 263 students will have completed the program with more than 95 percent finding employment and less than 2 percent recidivism.

One graduate has opened a restaurant, and another runs a food truck. Others work at well-known restaurants.

Students know Chrostowski, who often clocks 90 hours or more a week on the job, expects a lot from them. There are long hours, constant lessons to be learned and an expectation to study after work hours.

Students receive a stipend and program-provided housing at the “Edwins campus” nearby.

Clevelander Nicole Palmer, 31, is another Edwins student. She began working on in the kitchen when she started in the program in July. “It’s going good,” she said.

“I had no cooking experience. It’s all hands-on. Hearing compliments from everybody makes me want to do more,” added Palmer, who ended a 15-month prison sentence on a felony conviction in the spring.

The philosophy Chrostowski follows is simple: make sure people know when they are doing well and point out errors in a nonjudgmental way so people learn from their mistakes without feeling they will never succeed.

Chrostowski arrived in Cleveland 2008 after hearing that the city had the highest poverty rate in the country. He had worked for a decade learning the culinary trade under well-known mentors in New York, Chicago and France, and decided to bring to Ohio his dream to develop the best culinary school and best French restaurant in the country along with the desire to help others succeed. On Nov. 1, 2013, the restaurant opened.

Edwins encompasses more than the restaurant and culinary school. Chrostowski has established the Second Chance Life Skills Center two blocks south of Shaker Square. Four buildings are involved including two residences for students and a culinary library and recreation center. The fourth is being converted into a butcher shop.

The butcher shop, Chrostowski said, will include Edwins graduates while providing quality meats and healthy food at reasonable prices.

Funding for the venture comes from restaurant revenues, individual and corporate contributions and foundation grants. Several parishes also collaborate with the program by collecting money, books, clothing and household items to help graduates re-establish their lives.

The program has been featured in an Oscar-nominated documentary short, “Knife Skills.”

Dawson learned about Edwins from an aunt before his release. He applied as soon as he returned home and was accepted. He told CNS he likes greeting guests and making sure their needs are met.

“I knew customer service,” he said, “but I had no idea how to really cater to someone and anticipate what they need before they need it. It’s how to become comfortable with the table, to listen to certain cues and just watch.

After being admitted into the program, students are required within a week or so to obtain state-issued identification card, a bank account, health insurance and a life plan. For many, it’s the first time they have been able to accomplish so much in so little time.

“In 10 days if I threw you in a scenario where you kept winning, winning, wining, what happens then is that you get this more powerful ‘yes.’ That more powerful ‘yes’ is stronger than the temptation around you and you’re more likely to say ‘no’ to this, ‘no’ to that. You’re also building trust. That takes longer, but that’s the winning part of this and this building of esteem,” Chrostowski said.

“That’s the biggest challenge we have, esteem. Poverty is ripped it away, that prison is ripped it away,” he continued. You’re switching tasks (at Edwins), facing new challenges. You’re building that muscle of esteem and in six months you have someone who is confident.”

When Dawson completes his training in November he will have a recommendation from the Edwins staff that he can carry to one of Cleveland’s classy new restaurants or perhaps the new butcher shop. He wants to continue interacting with the people who come through the door.

With his new culinary experience, he hopes to have the perfect answer.