Shrine rector shares spiritual side of recent brush with death 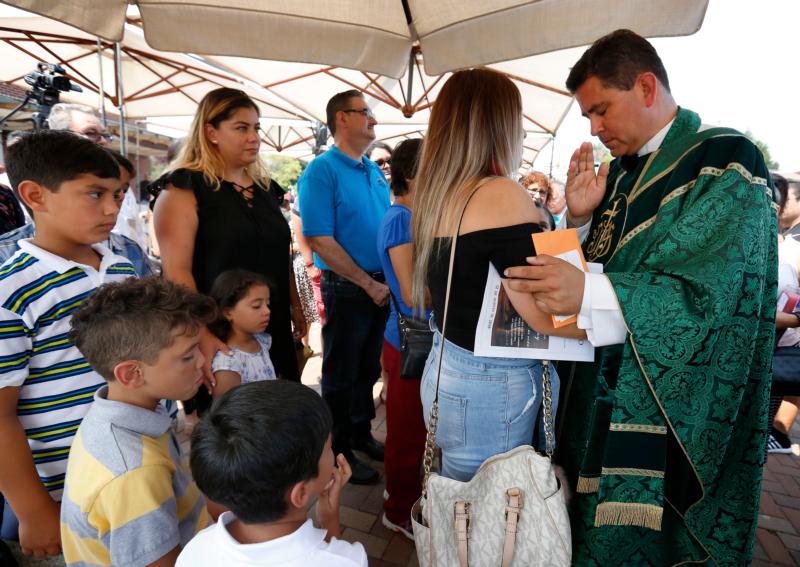 Father Esequiel Sanchez, rector of the Shrine of Our Lady of Guadalupe in Des Plaines, Ill., blesses a woman following an Aug 12 Mass of thanksgiving at the shrine. Father Sanchez addressed questions about life and death in his homily during the Mass, his first at the shrine following the crash of an Aeromexico flight July 31 in Durango, Mexico, which he survived. (CNS photo/Karen Callaway, Chicago Catholic)

Father Esequiel Sanchez, rector of the Shrine of Our Lady of Guadalupe in Des Plaines, Ill., blesses a woman following an Aug 12 Mass of thanksgiving at the shrine. Father Sanchez addressed questions about life and death in his homily during the Mass, his first at the shrine following the crash of an Aeromexico flight July 31 in Durango, Mexico, which he survived. (CNS photo/Karen Callaway, Chicago Catholic)

DES PLAINES, Ill. (CNS) — When someone survives a brush with death, such as a plane crash, and has stood at the precipice between this world and the next, they often ask, “Why did I survive?” or “What is waiting for me after I die?”

Father Esequiel Sanchez, rector of the Shrine of Our Lady of Guadalupe in Des Plaines, addressed questions about life and death in his homily during his first Mass at the shrine Aug. 12 following the crash of an Aeromexico flight July 31 in Durango, Mexico. He and the other 103 people aboard survived the accident.

The plane crashed almost immediately after takeoff. About 15 of his family members and friends who were in Mexico to celebrate his 50th birthday also were on the plane.

Father Sanchez sustained multiple fractures in his arm and required surgery. Journalists from around the world covered the story and focused on Sanchez’s experience in particular.

He recently met with Chicago Catholic, newspaper of the Archdiocese of Chicago, to share the spiritual implications of surviving a brush with death and the impact it has had on him and the other survivors.

The priest said he believes it was a miracle from God that everyone survived. Father Sanchez took private flying lessons years ago and understands the science behind what happened.

It was raining and hailing when the plane took off. Then a microburst pushed it back down on the runway. The landing gear buckled, and the plane went into a slide but didn’t tip over. The fuel tanks were punctured.

“The window of opportunity not only to make it but to make it out alive — all of us — is very small. That’s what I keep pointing to. That’s what leads you to say there was divine intervention here,” he explained.

Father Sanchez also saw miracles in the reactions of passengers, who immediately took care of each other.

“What I saw here was people did not want to leave without their loved ones. They went back to help others,” he said. “I would see that as miraculous too because people cared about each other.”

Despite his broken arm, Sanchez said he too went back to help.

“All these things point to me that it was miraculous, and I’m very comfortable saying that because I’m looking at everything that’s telling me it should have come out differently,” he said. “But then the subsequent question is ‘Why?'”

One question he said that surfaced for many survivors in the aftermath was what happens after we die.

“Our faith has an answer for that. It’s called an accounting, it’s called our judgment,” he said.

Another question is what will life be like after death?

“God’s original purpose is that we adore him and that we serve him. That happens in heaven,” the priest said. “You’re not sleeping in a hammock up there. You’re not drinking margaritas saying, ‘I’m done.’ No, no. It’s a life of adoration. It’s a life of service.”

Survivors also are asking, “Why were we spared?” In Durango that same day, a bus accident killed 11 people.

During his homily, Father Sanchez said that in the weeks following the crash, what has changed him personally is people’s expressions of love and gratitude to God that he made it out alive.

People are happy to see him because their faith in miracles has been confirmed, he said.

“You really want to take better care of those who love you and take better care of the gifts that you’ve been given,” Father Sanchez added. “That’s why I pray that I become a better priest. Not because the experience scared the bejeezus out of me, and it did, but because they showed so much love toward me. My response has to be (to be) a better priest.”

PREVIOUS: Puerto Rico getting back on feet ‘step by step,’ but long road remains