Timeline on archbishop’s life, ministry, abuse claims made against him 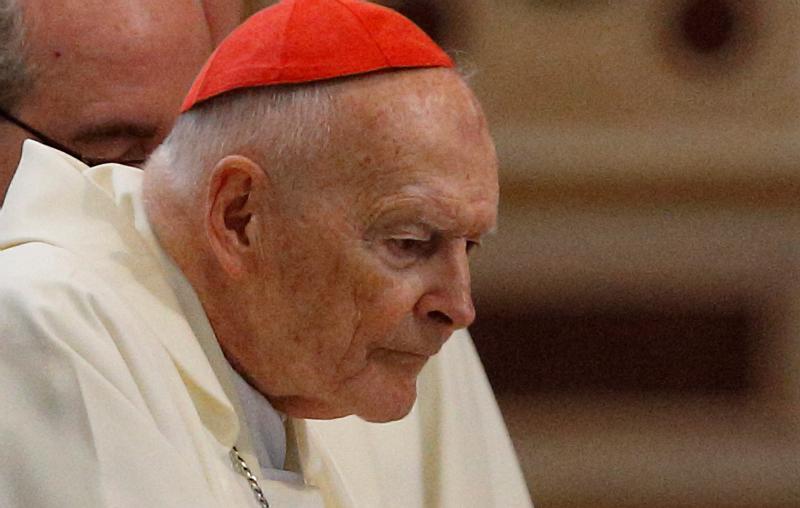 Then-Cardinal Theodore E. McCarrick attends a Mass in Rome April 13, 2018. The retired archbishop of Washington faces a canonical trial on allegations he sexually abused a minor and seminarians some years ago. Pope Francis accepted his resignation from the College of Cardinals July 28. (CNS photo/Paul Haring)

UPDATED – ROME (CNS) — Here is a timeline of key events in the life of Archbishop Theodore E. McCarrick since his ordination as a priest for the Archdiocese of New York 60 years ago. It includes information on his episcopal appointments to dioceses and archdioceses and covers allegations of abuse that have been lodged against him.

1958 June 15 — Father McCarrick ordained a priest for the Archdiocese of New York by Cardinal Francis Spellman.

1969 — Msgr. McCarrick named assistant secretary of education for the Archdiocese of New York.

1969 — Msgr. McCarrick allegedly exposes himself to James, then an 11-year-old boy, in Northern New Jersey. As reported by The New York Times July 19, James alleged that an abusive relationship continued for nearly 20 years.

1984 — Bishop McCarrick authorizes Diocese of Metuchen to purchase beach house in Sea Girt, New Jersey, according to The New York Times. He is alleged to have abused seminarians at the house.

1994 — The unnamed Metuchen priest writes a letter to Archbishop McCarrick’s successor in Metuchen, Bishop Edward T. Hughes, stating that abuse he allegedly endured from Archbishop McCarrick and other priests triggered him to touch two 15-year-old boys inappropriately. In the letter he also claimed he saw Archbishop McCarrick having sex with a young priest and that the archbishop invited him to be next. The letter was in a file the priest provided to the Times on the condition his name not be used.

2000 Nov. 21, 24 — Seminary instructor Father Boniface Ramsey says he spoke Nov. 22 with Archbishop Gabriel Montalvo, the Vatican nuncio in Washington, about his concerns about Archbishop McCarrick. He also expressed his concerns in a letter addressed to the nuncio and mailed Nov. 24. Father Ramsey, who taught at Immaculate Conception Seminary at Seton Hall University in New Jersey from 1986-1996, said he was told by seminarians about Archbishop McCarrick’s alleged sexual abuse at the New Jersey beach house.

2001 Jan. 3 — Archbishop McCarrick installed as archbishop of Washington and is elevated by Pope John Paul the next month to cardinal.

2002 April 23-24 — U.S. cardinals including Cardinal McCarrick meet at the Vatican for a summit with Pope John Paul as sex abuse crisis unfolds in the United States. Cardinal McCarrick is on drafting committee of document that emerges from summit. He also is a spokesman for the bishops in Rome and one of three U.S. prelates to give a news conference at the Vatican.

2002 April 28 — Cardinal McCarrick speaking on “Fox News Sunday” urges a distinction between past offenders and anyone who offends from now on. He said he supports the removal of any priest accused in the future but added that cardinals are divided about whether such a policy should be applied to past allegations.

2002 June — Cardinal McCarrick helps draft “Charter for the Protection of Children and Young People” in Dallas during a meeting of all the U.S. bishops. Charter does not specify abuse committed by bishops or cardinals or abuse of adults over the age of 18; a statement of commitment in the charter obliges bishops to report to the apostolic nuncio if they themselves are accused of sexually abusing a minor or if they become aware of an allegation of such abuse by a bishop. Cardinal McCarrick tells the Catholic Standard, his archdiocesan newspaper, that he had been hesitant to support the charter’s “no strikes” policy of removing from ministry everyone against whom there has been a credible charge of sexual abuse.

2004 — Unnamed priest who wrote letter to Bishop Hughes of Metuchen in 1994 claiming abuse by Archbishop McCarrick is forced to resign under the U.S. church’s new zero-tolerance policy against child abuse, based on his admission of having abused children in the 1994 letter.

2004 Oct. 1 — The Washingtonian magazine runs a profile article on Cardinal McCarrick, the archbishop of Washington. The article states that “for the past 20 years he has vacationed for a week every year on the New Jersey shore, where a friend loans him a house. He usually takes along a group of priests or seminarians.”

2006 May 16 — Cardinal McCarrick’s resignation as archbishop of Washington is accepted by Pope Benedict XVI. He had submitted his resignation when he turned 75 on July 7, 2005, as required by canon law.

2008 April 22 — Richard Sipe, a former priest who was an adjunct professor at St. Mary’s Seminary in Baltimore, posts open letter on internet to Pope Benedict alleging Cardinal McCarrick sexual abused seminarians and young priests. He said seminarians came to him with their concerns while he was teaching at seminary.

2010 May 12 — Richard Sipe states in an internet post that the case of a financial settlement by the Diocese of Metuchen and the Archdiocese of Newark for Cardinal McCarrick was sent to the Congregation for the Doctrine of the Faith at the Vatican. He says the CDF has not responded. Sipe posts graphic information from the settlement about an alleged incident involving Archbishop McCarrick and a seminarian and two young priests.

2017 March 1 to April 15, 2018 — During this time the Archdiocese of New York receives an allegation that Msgr. McCarrick abused a teenage boy in 1971 and 1972. Allegation handled according to procedures in “Charter for the Protection of Children and Young People.”

2018, June 20 — New York Cardinal Timothy M. Dolan announces that Cardinal McCarrick has been removed from ministry at direction of the Vatican after an investigation by the Archdiocese of New York found credible a charge that he sexually abused a teenager.

2018, June 20 — Cardinal McCarrick issues statement saying that he was advised months ago by Cardinal Dolan about the allegation against him. Cardinal McCarrick maintains that he is innocent and says he does not have recollection of the abuse.

2018, June 20 — Newark Cardinal Joseph W. Tobin issues statement about Cardinal McCarrick saying the Archdiocese of Newark and the Diocese of Metuchen “received three allegations of sexual misconduct with adults decades ago; two of these resulted in settlements.”

2018, June 20 — Metuchen Bishop James F. Checchio says a re-examination of diocesan archives did not uncover “any report or allegation that Cardinal McCarrick ever abused any minor during his time in Metuchen.” Bishop Checchio acknowledges that in the past there have been allegations that then-Bishop McCarrick engaged in sexual behavior with adults.

2018, June 20 — Cardinal Donald W. Wuerl of Washington issues statement saying that concurrent with the Archdiocese of New York investigation he requested a review be made of Washington archdiocesan records. He states that no claims were made against Cardinal McCarrick during the prelate’s time in Washington.

2018, July 16 — The New York Times publishes a front-page story detailing alleged abuse of two seminarians who became priests in the Diocese of Metuchen, by Cardinal McCarrick in the 1980s that resulted in settlements to both men. These are the settlements concerning “sexual misconduct with adults” as described by the Newark Archdiocese and Diocese of Metuchen June 20.

2018, July 24 — Boston Cardinal Sean P. O’Malley, president of the Pontifical Commission for the Protection of Minors, issues a statement confirming that his office in 2015 received a letter from Father Boniface Ramsey alerting them to the abuse of Cardinal McCarrick. Cardinal O’Malley states he did not “personally receive” the letter and that at the staff level a reply was made to Father Ramsey that it “did not fall under the purview of the Commission or the Archdiocese of Boston.”

2018, July 28 — Pope Francis accepts resignation of Cardinal McCarrick from College of Cardinals and suspends him from public ministry. The pope orders him to a “life of prayer and penance” until the accusations against him are examined in a canonical trial.

2018, Aug. 1 — Cardinal Daniel N. DiNardo of Galveston-Houston, president of the U.S. Conference of Catholic Bishops, announces that the conference “will pursue the many questions surrounding Archbishop McCarrick’s conduct to the full extent of its authority.”