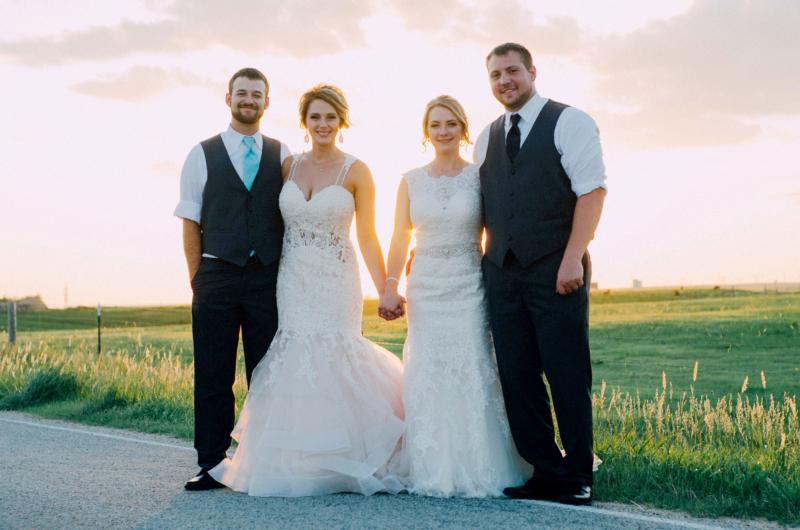 Twin sisters Amber and Brianna Wooldridge celebrated a double wedding July 7 at St. Francis of Assisi Church in Munjor, Kan. From left are Clay and Brianna Kear and Amber and Zach Binder. The fraternal twins served as the witness for one another during their vows. (CNS photo/Emily Garcia Photography)

MUNJOR, Kan. (CNS) — Growing up in Munjor, and later Hays, fraternal twins Amber and Brianna Wooldridge were used to celebrating milestones together.

From their baptism and their birthday to first Communion, confirmation and graduation, pictures and home videos tell the story of sisters used to sharing the major events in each other’s lives.

Fast forward to 2016 when Amber and Brianna, both newly engaged, began planning their weddings, Amber to Zach Binder and Brianna to Clay Kear.

The sisters were part of each other’s plans from the beginning, both preparing to be the other’s witness during her nuptial Mass. As the arrangements began to take shape, the pair and their husbands-to-be discovered that scheduling was going to be difficult. Initially both weddings were scheduled within weeks of each other.

Then, the joking began.

Clay recalled that Amber and Brianna’s father, Brian Wooldridge, commented, “We should do both weddings at the same time to save some money!”

“He was joking, but it made sense,” Clay told The Register, newspaper of the Diocese of Salina.

While the couples wanted their own separate days, Brianna said the logistics of having a double wedding started to become clear especially when considering that some attendants would otherwise be in both weddings and the twins’ extended family members and friends who live out of town might have to choose to attend one wedding over the other.

“Yes, our family started joking about it a lot,” said Amber, “but we thought, ‘we’ve done all these other major milestones together so let’s do it!'”

Clay and Zach were on board with the idea as well.

While the couples did their formal marriage preparations through the Catholic Church separately, the four came together in front of family and friends this summer at St. Francis of Assisi Church in Munjor to celebrate their nuptial Mass.

As planned, the sisters served as witnesses for each other, with their brother, Tyler Wooldridge, serving as best man and witness for Zach and Amber’s vows, and friend Philip Nowak serving in the same capacity for Clay and Brianna.

For celebrant Father Jarett Konrade, the July 7 double wedding was a first.

“I think there have been two or three times in my 13 years of priesthood where I’ve had two weddings in one day, but a double wedding is rare,” he said. “In fact, it proved to be a little more challenging as the rites and rituals of the sacrament are generally written with only one couple in mind, so I had to adjust some of the wording to incorporate two couples.”

Now, having been married for almost two months and living on opposite sides of Kansas, Clay and Brianna in Edgarton and Zach and Amber in Hays, the couples agree that sharing their wedding ceremony was truly something unique.

Brianna recalled watching a home video of the twins’ baptism during a visit with some family members a week after the wedding.

“I watched as they went through the parts for Amber and then for me, and you know, I’ve done every sacrament with her so to me this (double wedding) was natural!”

“Brianna and Clay have become some of our closest friends through this process,” said Zach. “You know, you do some sacraments like first Communion and confirmation as part of a group, but most times the sacrament of marriage is just one couple and isn’t something you get to share.”

Amber added, “Brianna and I have both found our soul mates so being able to share the day and the sacrament together was really special.”

The sacramental aspect is something Father Konrade noted in speaking about the rarity of this double wedding.

“It was a cool thing because the sacramentality of marriage sometimes gets lost with all the bells and whistles that our culture has pushed on weddings and marriage,” he said. “In preparing for this wedding, it brought to my mind, and hopefully the minds of the people in attendance, the sacramental nature of marriage.”

As the couples look toward the future, they know the sacraments and their faith will be the foundation of their unions, and that their faith, like their wedding day, is meant to be shared.

“Our faith hasn’t changed a ton, but our perspective has,” said Zach. “We used to think that faith was an individual thing, but now we know it’s about me making her more faithful and her doing the same for me.”

Ochoa writes for The Register, newspaper of the Diocese of Salina.