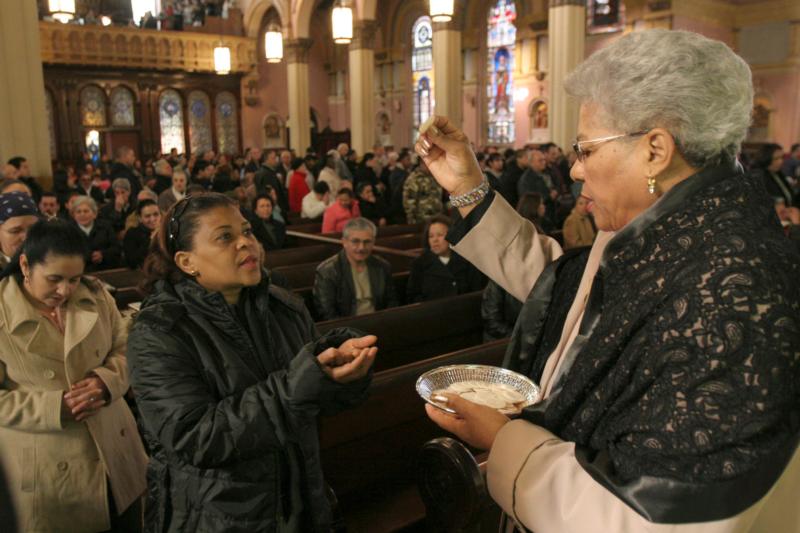 An extraordinary minister of the holy Eucharist distributes Communion during Mass at Transfiguration Church in the Williamsburg section of Brooklyn, N.Y. A new survey by the Center for Applied Research in the Apostolate in Washington shows 78 percent of men and women religious superiors favor ordaining women to the diaconate. (CNS photo/Gregory A. Shemitz)

WASHINGTON (CNS) – A new study by the Center for Applied Research in the Apostolate at Georgetown University surveyed men and women religious superiors in the United States about the possibility of ordaining women to the diaconate and found that the majority were in favor of the idea.

The survey was taken in response to a papal commission organized by Pope Francis to study the question of ordaining women to the permanent diaconate.

Seventy-six percent of religious superiors were aware of the commission, and 69 percent knew that it had formed and met.

However, they were less confident that it would happen. Only 45 percent believed that the church would authorize female deacons, and, if it were authorized, 58 percent believe that their bishop would implement it.

Sixty-four percent of the superiors were at least “somewhat” aware of a history of women being ordained as deacons and 84 percent believed that doing so would create a greater call for women to be ordained to the priesthood.

About 60 percent of the superiors of women’s orders said that they would consider allowing their members to be ordained.

CARA sent a questionnaire to each major superior by email or mail and also sent questionnaires and cover letters to superiors of monasteries of contemplative nuns who do not belong to either LCWR or CMSWR. All communications included instructions for how to respond in multiple ways via mail, online or fax.

CARA mailed surveys to a total of 777 potential respondents and responses were collected from Jan. 26 to May 30 of this year. CARA researchers also conducted extensive follow-up by mail, e-mail, telephone and fax. The researchers received completed responses from 385 religious institutes for a response rate of 50 percent which has a margin of error of plus or minus 3.55 percentage points.

A news release announcing the survey results, stressed that the survey was not a “vote” on this issue but a means to “measure attitudes, opinions and behaviors.”

This particular study, it said, “sought to understand how superiors or religious institutes in the United States think about the question of female deacons during a time in which a papal commission is studying this issue. It should provide insight into how these respondents might react to the work of that commission in the future.”