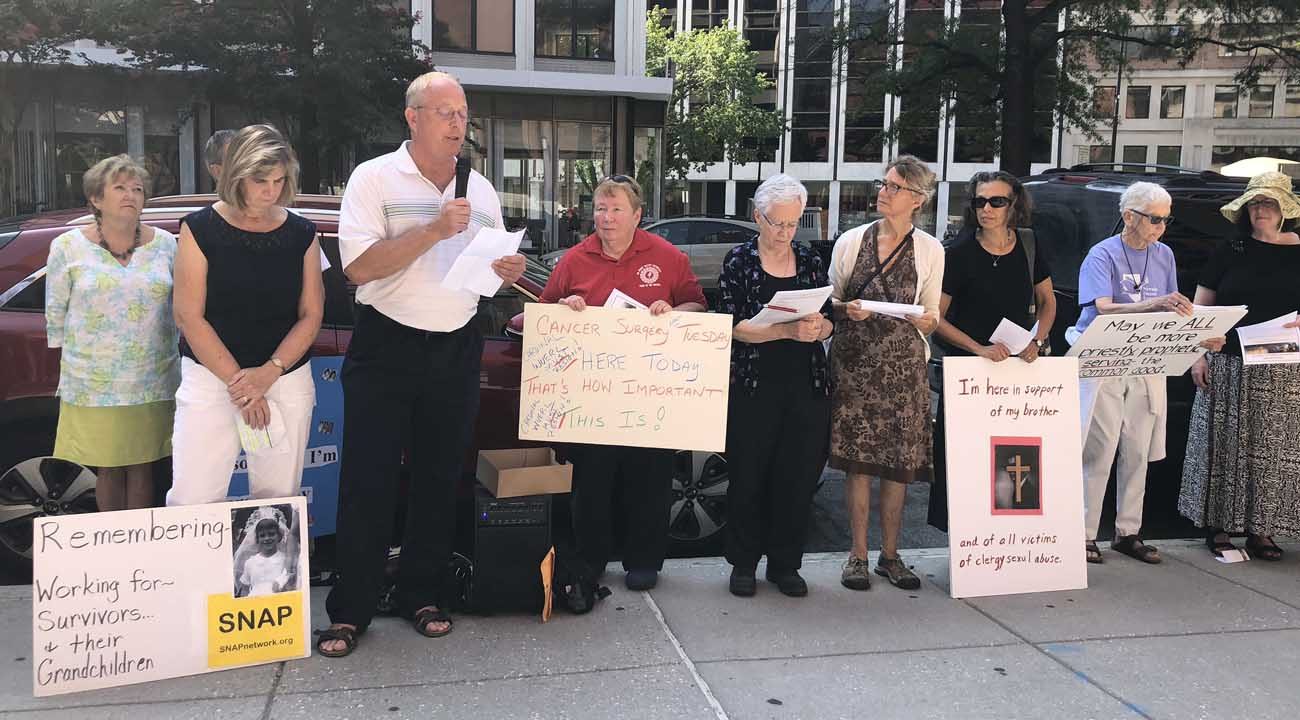 David Lorenz, holding the microphone, addresses a crowd gathered outside the Cathedral of St. Matthew the Apostle in Washington Aug. 26. Joined by Catholics who showed up to support sex abuse victims, Lorenz, a survivor of clergy abuse, called on Cardinal Donald W. Wuerl to resign. (CNS photo/Rhina Guidos) See story to come.

“I know it’s hard to hear,” she said to some of the parishioners headed down the church steps. Some waved her away. Some looked pained and took a different path to leave. But others stopped to talk and hear her out.

Some heard the tale of how her husband was abused by a priest when he was 15. Some agreed with her demands for more transparency in the Catholic Church. Others disagreed about whether the cardinal’s resignation was the answer or would in any way help the U.S. church grappling with how to best handle revelations that spilled out after an Aug. 14 grand jury report described sex abuse claims at six Pennsylvania dioceses that had been hidden for seven decades.

“It’s hard to hear the truth,” she said, speaking to Catholic News Service outside the church. “Who wants to be betrayed?”

And that’s how some of the Catholics who joined Lorenz said they feel: betrayed. They are reeling, not only because of the mixed picture painted about how Cardinal Wuerl handled some of the abuse claims when he was bishop of the Diocese of Pittsburgh, one of the dioceses investigated, but also about recent allegations that the cardinal’s predecessor, the archdiocese’s retired Archbishop Theodore E. McCarrick, may have sexually abused seminarians and two minors. Archbishop McCarrick announced his resignation from the College of Cardinals July 28.

Those in the crowd of about 40 demonstrators outside St. Matthew’s said they felt Cardinal Wuerl should follow with a resignation of his own. Those who were or are in a position of power in the church, who knew of the sexual abuse of children or others by priests or bishops, and did not take action to protect the flock should resign, said Ernie Jenkinson of Holy Trinity Parish in Washington. He joined the demonstration at Cardinal Wuerl’s home parish under the umbrella of Catholics for Action, a coalition of Catholic individuals and groups who say they want to lend support to victims and survivors of clergy sex abuse.

“I think Cardinal Wuerl is a wonderful man, I’ve seen him in action, he goes out of his way to be generous,” said Jenkinson. “But how he was involved in Pittsburgh … and didn’t do something about exposing what was going on, that doesn’t make sense to me. I’m confused.”

Though some credit Cardinal Wuerl’s tenure in Pittsburgh with a drop in abuse cases while he served as bishop there from 1988 until 2006, the report from the Pennsylvania grand jury points to instances in which he is said to have allowed an accused priest to continue working and prevented an alleged victim from speaking out about being abused after a financial settlement.

Since the report’s release, Cardinal Wuerl has faced growing pressure from some Catholic groups to step down.

The 77-year-old cardinal, the sixth archbishop of Washington, submitted his resignation, as is mandatory, to the pope when he turned 75 two years ago, but it has not been accepted.

At the 8:30 a.m. Mass at which he presided just two hours before the demonstration outside, Cardinal Wuerl addressed the abuse crisis before Mass and during his homily, calling it a “dark cloud of horror,” and he asked for prayers for victims and survivors.

But outside the doors of St. Matthew’s, abuse survivor David Lorenz of Bowie, Maryland, said some of those victims could no longer respond to those prayers.

“I’m here to talk about those who felt they had nowhere to turn, who were turned away by church officials or their church communities, so they turned to something else: drugs or alcohol or a risky lifestyle,” he said. “These are the thousands of children who took their lives because they felt lost due to guilt or isolation. Church officials knowingly exposed these kids to their predators and then did nothing to stop them … they are as responsible for their deaths surely as if they’d punched a knife into their heart.”

Bob Cooke, one of the demonstration’s organizers, led the group in prayers outside the church as the 10:30 a.m. Mass inside got started.

“We lift up our voices to ask our church leaders to show courage and repentance in facing up to the wrongs that have been perpetrated and any acts of commission or omission that allowed for these abominations to continue,” Cooke said.

Family and survivors spoke about the experience and the invisible scars the abuse has imprinted on them and their loved ones.

Father James Moran spoke of how he was abused by a priest when he was a deacon, and the subsequent fallout when he was finally able to speak about it. Marie Dennis of Our Lady Queen of Peace Parish in Arlington, Virginia, spoke of a recent conversation with her son, a survivor of sexual abuse at the hands of a priest whom he had trusted as a teenager.

“I am angry — enraged again at the man who violated my son, at the individual perpetrators of abuse, and at those church leaders who failed to stop it, failed to root out the cancer that has invaded our community,” she said. “The harm they have done is incalculable.”

Transparency, public accountability, the resignation of church leaders responsible for cover-up or neglect of crimes, ending statutes of limitations that would allow convictions of perpetrators, and opening the archives of the church so that others can see the truth would be stepping stones toward restoring trust, Dennis said.

“We who are the church need to see if restorative justice practices are possible, practices that include just punishment for perpetrators and serious, time-consuming processes to heal the ruptured relationships in our community,” she said. “But the institutional Catholic Church we know also needs a profound transformation, a new reformation, if it is to be in any way faithful to the Gospel of Jesus Christ. The patriarchy upon which the church stands is itself anti-Gospel.”

Clerical privilege needs to end, Dennis said, and “give way to the radical inclusion of women, of all people — a radical inclusion that Jesus taught and lived” because abuse of power is what resulted in “this scandalous behavior and unprecedented capacity to destroy lives.”

Marilyn Jenkinson, who was accompanying her husband Ernie, said she skipped Mass at her parish to attend the event and show support for families like Dennis’ and for victims and survivors.

“I would be much more comfortable at my parish right now,” she said. “But today I decided this is what I was going to do because it’s not normal times.”

To prevent even more erosion of trust between the hierarchy and the flock, church leaders’ next step should be to include all communities into the process of protection, as well as other aspects of the church, she said.

“The next step is equality in the church in all regards … all communities,” she said. “A lot of the problems will be resolved if the right people are making decisions in a transparent way.”

PREVIOUS: As survivors find voice, church leaders wrestle with how to address issue

NEXT: Puerto Rico getting back on feet ‘step by step,’ but long road remains