Basketball legend Bud Gardler recalled as teacher on court and off 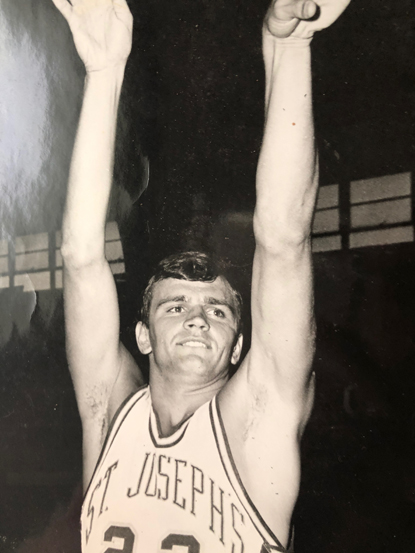 A family photograph shows Buddy Gardler who, although cut from his high schools teams, made it as a walk-on player at St. Joseph’s University. He would enjoy a five-decade-long coaching career, mostly at Cardinal O’Hara, where he amassed 560 victories.

It was sometime back in the 1990s. Memory escapes. No clue about the opponent, or even the venue.

The game was over and a player who had done something he should not have done at some point of the game walked over to his coach, Buddy Gardler, who was about to begin a post-game interview.

Gardler stared the player down, uttered something in a clear, stern manner, and the teenager apologized and sheepishly walked away. Gardler turned back toward the interviewer, winked, and proceeded to talk about basketball.

To someone watching from afar, or even close by, Gardler’s disciplinary approach might have seemed unnecessary. But Buddy Gardler was a no-nonsense type of person. Ask his former players. His former coaches. His children.

A few years ago, Buddy Gardler sent a letter to a longtime friend of his children. She was enduring an illness that few knew about. She was elated to receive the correspondence because “it came out of the blue.” She said it provided a spark. No fanfare for the sender, but a boost of support and motivation for the recipient.

Buddy Gardler, whose teaching and basketball-coaching career spanned five decades – most of it at Cardinal O’Hara High School – and ended in 2008 with the then-most victories (560) in Catholic League history (since toppled by another legend, current St. Joseph’s Prep coach Speedy Morris), died Aug. 15 following a rugged health battle. He was 72.

An English and history teacher at O’Hara, the product of Monsignor Bonner High School and St. Joseph’s University left behind a son, two daughters, five grandchildren, and quite a legacy.

“In 1976, Bud Gardler welcomed me into the coaching profession as the junior varsity coach at O’Hara,” said St. Joseph’s University coach Phil Martelli, one of Gardler’s eulogists. “He introduced me to many ideas and people who would shape my thinking and challenge me to grow. I am forever grateful to Bud for the guidance and, most especially, for the lifelong friendship.”

Martelli was one of numerous people mentored by Gardler who eventually etched a highly successful coaching career. The list is long and would no doubt miss a few former players or assistants.

For Gardler, however, basketball took a backseat to family. 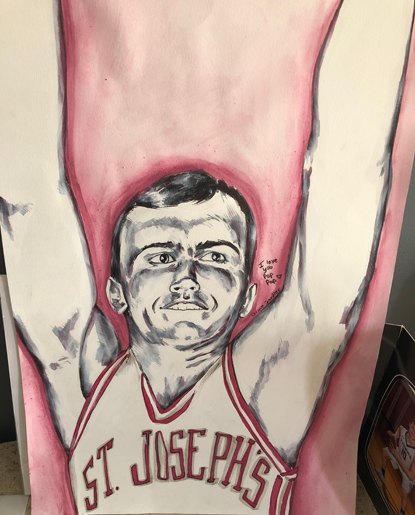 A painting of Buddy Gardler, patriarch of a family that continues to produce outstanding basketball players in the Philadelphia area, was rendered by his granddaughter Grace Gardler, 16.

“My dad was loyal, consistent, no nonsense, mentally tough, competitive, and hated excuses,” said son Chris Gardler, a former standout at since-closed St. James High School who later played and graduated from St. Joe’s. “All about effort and hard work. He had a great sense of humor, had a one liner for every situation, and was a master of sarcasm.

“He loved teaching whether it was in classroom or on the court. I found out over the course of the last couple days that he’d write letters, make calls, or just show up when one of his guys was having a bad time. He’d check in. All under the radar. He wasn’t a self-promoter. He was my hero. What better dad for a boy and man to have.”

Several members of the Gardler clan were asked to share their memories of a man who appears to have emulated the lyrics of Frank Sinatra’s fabled “My Way.” As Gardler approached his “final curtain,” his children said he was able to display a much more gentle, appreciative demeanor, one that helped pacify the aforementioned serious, “no-nonsense” approach to guidance.

“He was the most loyal, honest, trustworthy person I’ve ever met,” said daughter Marikate, a former second-team All-Catholic at Cardinal O’Hara. “You sure did not want to cross him if it came to his family. I lived with him my whole life, and the values he instilled in me are unlike any other in the world.

“We had a very special relationship since I was the youngest. I just followed him around and went wherever he went. I was so enamored by him and how many people loved him and thought he was ‘the man.’ He was my rock and it was the saddest day of my life losing him. The only glimmer of hope in all of this is that I know he’ll be with me for the rest of my life. He never left my side and never will.”

Daughter Meghan Gardler was a star at Cardinal O’Hara before playing at the University of Connecticut.
“Whenever someone close to you passes, it is hard to comprehend what the meaning of life is, and if it is all worth it,” she said. “When my dad passed, the legacy he left behind and the impact he made on those around him spoke for itself.

“My dad never left the country. Heck, he rarely left Delco. But he affected the lives of all he met in a positive way and didn’t have to go far to do it. I will miss his stories, his quick wit, and his little idiosyncrasies that made him who he was. He taught me how to play basketball, how to cherish a good book, how to get a good tan, and most importantly, how to change the little piece of the world you live in. I will always try to live up to his example that you can change the world even in a small way.”

Granddaughter Kenzie Gardler, a Catholic League champion at Cardinal O’Hara and now a redshirt freshman at Villanova University, said she now has “a new guardian angel watching over me on the court.”

“Growing up, it felt like anyone I met knew my Pop Pop, either from coaching or teaching,” she said. “To me I always looked at him as a legend for that. He coached so many well-known people who are very successful coaches now and it just adds to his legacy. It was so cool going to O’Hara and sharing that part of his life with him. I’ll miss him every day.”

Kenzie’s brother, Marple Newtown High School hoopster Tommy Gardler, 17, echoed his sister’s sentiments.
“Ever since I was young I had great respect for my Pop Pop,” he said. “I would always hear stories from relatives and friends about him. Some of them were hilarious and others were about his great accomplishments as a player and a coach.

“I think the one that stuck with me most was how he had been cut off of his high school team every single year but still had the courage and determination to play college basketball and walk on at St. Joseph’s. His story fostered my love for the game and motivated me to continue to stay in the gym to keep getting better.”

Tommy Gardler said he will cherish his grandfather’s final days.

“I always loved my Pop Pop, but I only saw him so often during holidays and other times when we could visit his house or meet him at the pool,” he said. “I think my love for him became even greater when it was closer to his passing as he was recovering from his heart surgery. He was very beat up and my parents were not sure he was going to make it, so I took advantage of the time I had with him and visited him often. Within those 40 days, I watched my grandfather progress day in and day out. I also saw a side of him that I had never seen before.

“My dad told me it was the closest thing my Pop Pop was like when he was growing up. A great amount of my sadness in losing him comes from the strengthening of our relationship in those days and me just wanting more of his happy, funny, sarcastic personality that I have come to know more of.”
Daughter-in-law Katie Gardler (nee Curry), a former basketball star at both St. Hubert’s High School and St. Joe’s, understood precisely to which her son Tommy was referring.

“In the last days on Bud’s journey back to health, we were able to see a side of him in all his vulnerability which gave us a glimpse of how absolutely amazing he really is,” she said. “He allowed us the opportunity to care for him and love him with no road blocks.

“This man gave us a beautiful window into his heart which was always so guarded. The pain comes from wanting more. I am just so proud and happy that my family seized the moment. The thing I will miss the most is every single time I left him he would give me a kiss, tell me ‘I love you,’ and ask, ‘What time ya coming tomorrow?’ I would leave and couldn’t wait to get back the next day to see what he was going to accomplish next.”

The Gardler home is decorated with numerous family photos, including those of grandson Matt, 12, and granddaughter Olivia, 2. Various drawings by granddaughter Grace, 16, include spot-on likenesses of Buddy Gardler. Basketball memorabilia adorns various shelves.

It is a testament to a life well lived. A life that, as Sinatra said, was “full” and faced by a man who “stood tall” and did things his way.

NEXT: Eight teams of realigned PCL Blue Division ready for some football