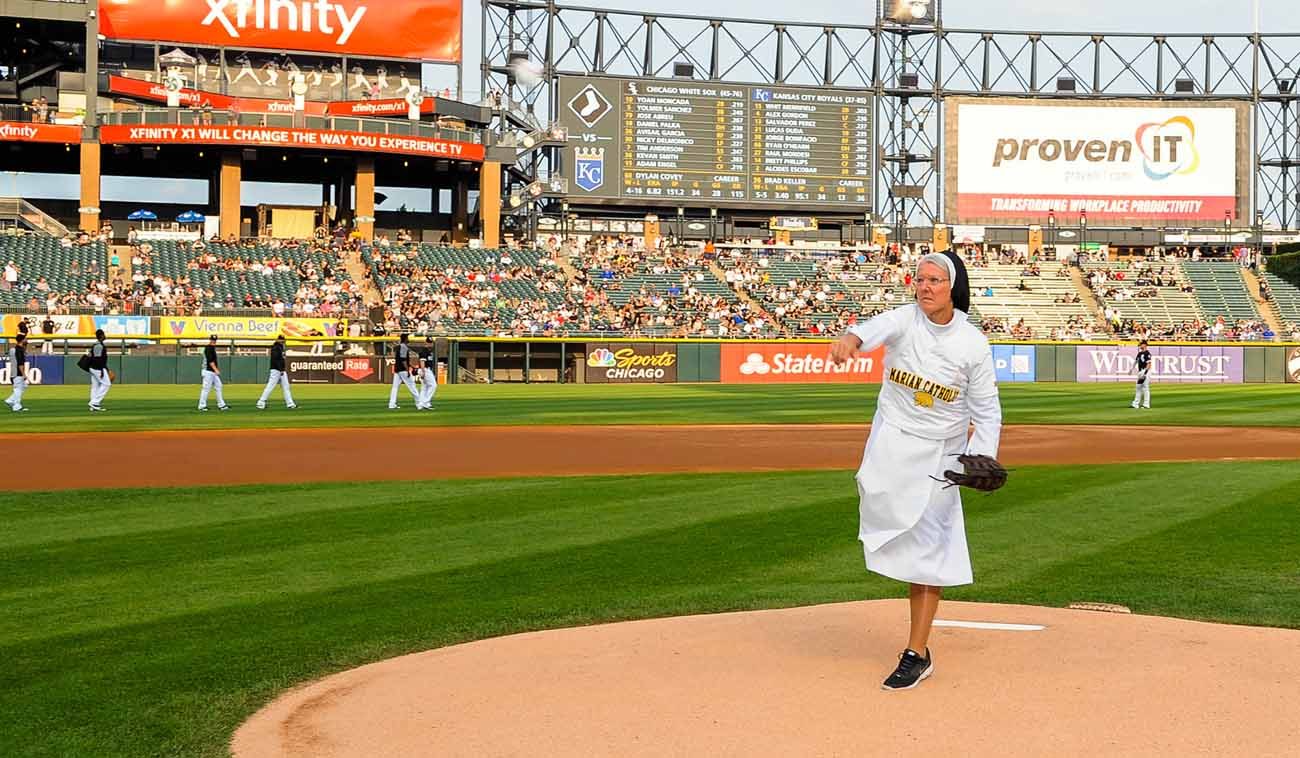 Dominican Sister Mary Jo Sobieck, a theology teacher at Marian Catholic High School in Chicago, throws out the ceremonial first pitch during the Chicago White Sox and Kansas City Royals game Aug. 18 in Chicago. Sister Mary Jo, an athlete and graduate of Cathedral High School in St. Cloud, Minn., bounced the ball off her arm before coming to a set position and letting loose with a curveball. (CNS photo/Anthony Peter, Chicago White Sox)

The ceremonial first pitch she tossed prior to a Chicago White Sox-Kansas City Royals game in Chicago Aug. 18 — a curveball with what baseball insiders call “12-to-6” action — was a perfect strike.

It also didn’t hurt that Sister Sobieck bounced the ball off her bicep before making the memorable pitch.

Even the Chisox’s own Twitter account called it “one of the most impressive first pitches of all time.”

White Sox pitcher Lucas Giolito, who crouched at home plate to catch the nun’s toss, remarked to mlb.com after the game, “That was awesome. She had a whole routine. She had it planned out. I was just lucky to be back there. She threw a perfect pitch.”

Sister Sobieck, a member of the Dominican Sisters of Springfield, Illinois, is a theology teacher at Marian Catholic High School in suburban Chicago Heights. She is an alum of Cathedral High School in St. Cloud, Minnesota.

On the mound, she wore over her habit a Marian Catholic T-shirt with the number “60” on the back to observe the school’s 60th anniversary. It also was Marian Catholic Night at the ballpark.

For her part, Sister Sobieck is modestly nonplussed about it all. “My goal is to just inspire young people to do their best and let God do the rest. It’s a question of giving your all, being resilient, part of a team,” she said on the school’s website. 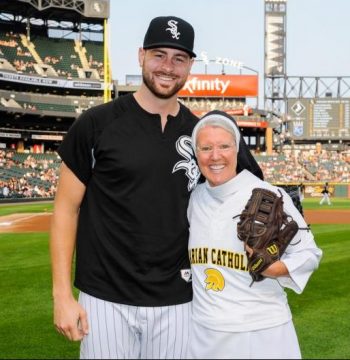 Sister Sobieck’s fame is so great that within two days, Marian Catholic was able to offer a bobblehead figurine, showing the right-hander in peak form. Five dollars of the $25 cost of the bobblehead will be donated to Marian Catholic.

“She was pretty good, actually,” White Sox manager Rick Renteria told reporters after the game. “We talked to her a little bit but before we were talking to her, she was talking to someone and she wanted to warm up. She had a mitt and a ball. She gave him (Giolito) the mitt. She stepped back at about 45 feet and threw a bullet.

“I’m like, ‘Wait a minute.’ He threw it back to her and she fielded it barehanded. I was like, ‘OK, she looks like she can play a little bit,’ so we started talking to her. I think she said, ‘I played center and short.’ I said to her, ‘Can you play for us?’ She said, ‘Sure.'”

The White Sox lost that night’s game, 3-1, and sat in fourth place in the American League Central Division with a 47-77 record through Aug. 20.

NEXT: Basketball legend Bud Gardler recalled as teacher on court and off