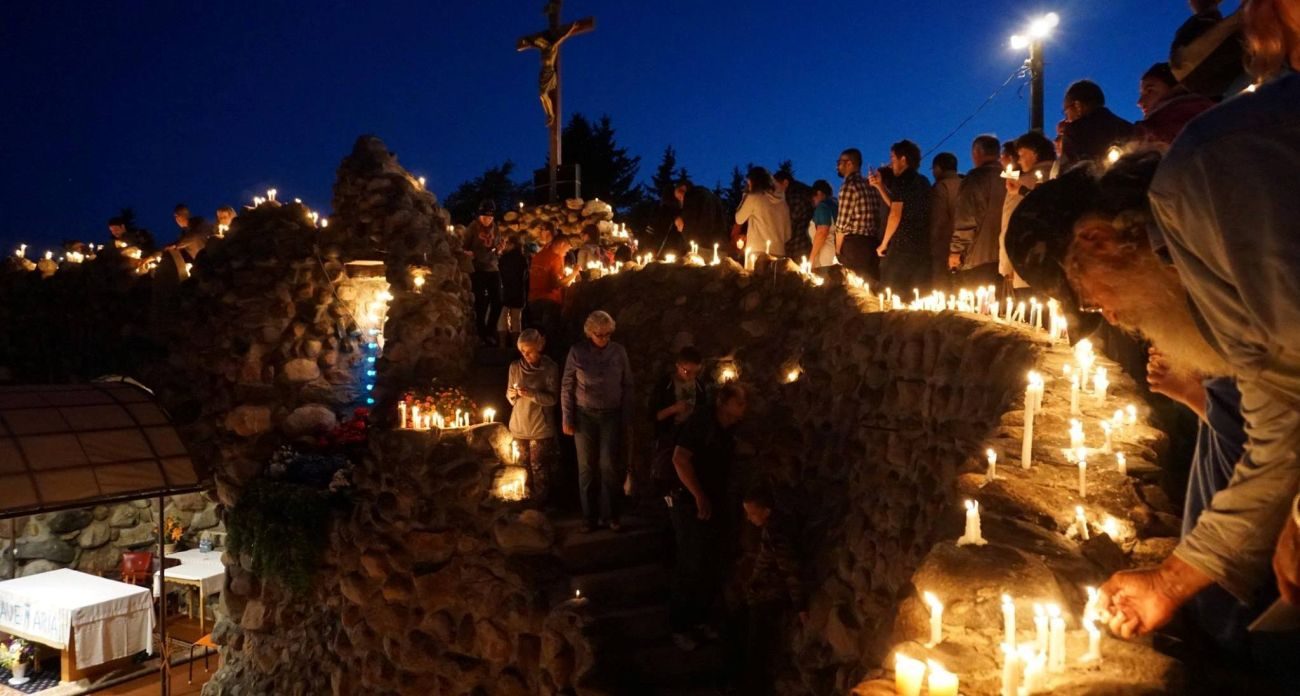 Worshippers attend a candlelight procession in 2016 at the annual Skaro Pilgrimage in Alberta. The shrine was built in 1919 by Polish pioneers who hauled 600 wagonloads of stones to the site. (CNS photo/Lincoln Ho, Grandin Media)

SKARO, Alberta (CNS) — It’s easy to drive by the stone grotto at the Skaro shrine for those who don’t know its history.

Tucked in a corner between two rural highways, due north of Lamont and 50 miles northeast of Edmonton, truck and cars whiz by. The drivers tend to overlook the small church and semi-circular stone grotto beside it.

Yet, thousands of pilgrims flock to Skaro every year to honor Mary Aug. 14-15 as they have done for 100 years. Tour buses stop at the site. Recreational vehicles park on the grounds of Our Lady of Good Counsel, the parish church of the Skaro district. Vespers are sung in Polish and Mass is concelebrated in English. Crowds walk through the grounds to the grotto in a candlelit procession.

At this year’s centennial pilgrimage, a new rosary garden was to be blessed by Archbishop Richard Smith of Edmonton, and 60 children will represent each prayer in the rosary.

Sonia Mackay, an organizer of the pilgrimage and a descendant of the pioneers who built the grotto, said there is always “a steady stream of visitors … from everywhere in the world.”

What passing drivers are missing is a story of hardscrabble immigrants who came to the Skaro district and, in 1919, used shovels and horse-drawn plows to build the grotto. A century later, the 91-by-108-foot stone wall that encircles a small altar stands as a testament to the faith and determination of the pioneers, who were mostly from Poland.

“It brings people together,” said Helen Wilchak, 89, who grew up in the area. Her father, Martin Gabinet, helped build the grotto. People from all faiths visit “because it is such a beautiful place.”

The number of first-generation descendants of pioneers is dwindling, but those who remember say the credit for building the Skaro grotto goes to Oblate Father Anthony Sylla, who was assigned to the Skaro mission in 1917.

In fall 1918 Father Sylla proposed building a grotto similar to the Our Lady of Lourdes grotto in France. He enlisted the help of Father Philip Ruh, who was serving in Eldorena, north of the Skaro site, and was familiar with the French structure.

The pioneers built it because “they had a strong faith,” said Stan Malica, 91, who grew up directly opposite the grotto site and whose father John helped build it.

“If you want to look at a miracle, look at this thing here,” Malica said. “It wasn’t built with engineers. No blueprints or anything. They just built it. Father Sylla had an idea how to build it and Father Ruh was the main contractor. He knew how to use stones.”

Construction began June 5, 1919. Working in shifts of 20 to 40 people at a time, men and women used plows and scrapers drawn by horses, as well as wheelbarrows and shovels, to haul and place stones. The only mechanical equipment was a generator to operate the concrete mixer.

Parishioners would bring loads of stones “from their own fields,” said Malica, whose family still farms the land opposite the grotto.

“It was like a work bee,” recalled Wilchak, who is related to Malica by marriage. “Everybody helped.”

They were so committed to the project that the grotto took precedence over everything else.

“They sacrificed their own duties at home, lots of them. That’s how passionate they were about this,” Mackay said. “After about two weeks they ran out of rocks … and they were going to give up. Father Sylla convinced them, ‘We started. We have to finish.'”

Six hundred wagonloads of stones and 300 bags of cement were used to build the grotto, which was completed in time for the first pilgrimage Aug. 14-15, 1919.

“I’ve never missed a pilgrimage here,” Wilchak said. “It’s in our blood. They came from Poland and they had a strong faith there. They brought it to Canada. And they kept it.”

Will the grotto be around for another century of pilgrimages? “I think it will be,” Malica said. “If it didn’t fall apart in the first hundred years, it will stay.”