Catholic nuns in the forefront of relief work for flooded Kerala 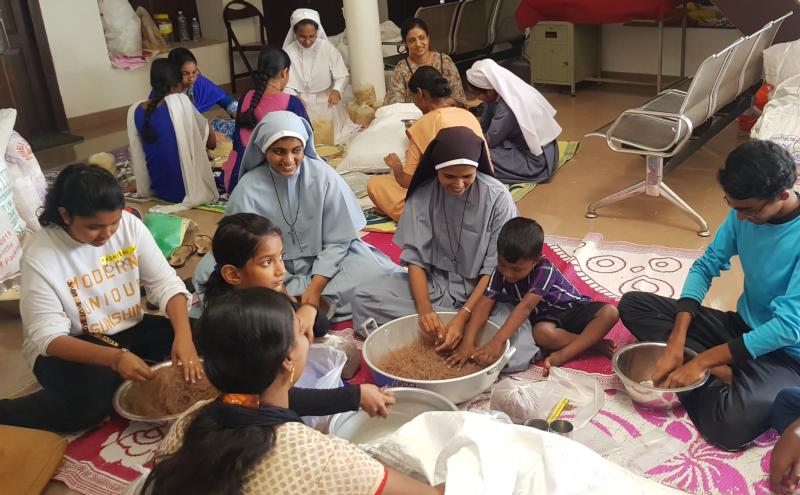 “This is the biggest rescue and relief operation the Catholic Church in Kerala has undertaken in its history,” said Father George Vettikattil, who heads the church’s relief operations in the state.

The church deployed its personnel and opened its institutions across Kerala to help people after rains and massive floods devastated 13 of Kerala’s 14 districts from Aug. 15 through Aug. 20. The rain has stopped in many places and water has begun receding.

The floods initially displaced nearly 1.3 million people. About 869,000 people were still sheltered in 2,787 relief centers in the state, a government official told the media in late August.

All 32 Catholic dioceses in Kerala have joined relief works, Father Vettikattil told Global Sisters Report. As many as 69,821 young people and 99,705 other lay volunteers helped 6,737 nuns, 2,891 priests and 354 seminarians to rescue stranded people with the help of government agencies. Another 2,178 religious priests and 447 brothers in the state joined the relief effort too.

The church workers, especially nuns, take care of all the needs of the camp residents, Father Vettikattil said. “Sisters play a pivotal role in taking care of the elderly, children and the sick.”

Sister Modesta, secretary of the Kerala unit of the Conference of Religious India, told Global Sisters Report that the state’s nuns, priests and brothers work in groups to clean the mud from the houses of people living in relief camps. “They leave in the morning and work until evening,” she said.

Many women religious, such as Sister Anju Sebastian, are appointed by the government as counselors in relief camps. Sister Sebastian, a member of the Daughters of the Sacred Heart of Jesus who is based in Nedumkandam, a town in the Idukki district, said her biggest challenge is people’s reluctance to return home.

“Traumatized people who have seen their neighbors and relatives being washed away” in landslides do not want to go home, she told Global Sisters Report.

Another counselor, Sister Chaithanya of the Congregation of Mother of Carmel, said members walk several miles daily to encourage people to face the reality and move forward.

“Many have not reconciled to the death of their relatives, loss of houses and sources of livelihood,” she said. Also, many people were unable to attend the funerals of loved ones as floods snapped transport and telecommunication infrastructure in Idukki, which is a hilly region.

“The hills have developed big cracks, and walking on such areas has become dangerous,” Sister Chaithanya said.

Three hundred nuns from 14 congregations are engaged in marathon-style counseling sessions for the 50,000 displaced people in 32 camps in Changanacherry in Kottayam district, said Sister Litty Kochuchira, head of the Devamatha province of the Franciscan Clarist Congregation.

“When they return, many will have no house … We counsel them to accept what has happened, while assuring them that the government and aid agencies (will) help them build new houses,” she told Global Sisters Report.

Sister Lincy Valiyaplackel, a member of the Sisters of the Adoration of the Blessed Sacrament who works at a camp for 500 people in Vazhappally, near Changanacherry, said that “everyone came empty-handed, not knowing what was ahead.”

One resident of the Vazhappally camp is Shyam Lal, a Hindu air conditioning mechanic who told Global Sisters Report that he and his family lost everything but the clothes they were wearing when the floods came. “We were saved from the mouth of death. This is a new life for us,” he said.

Sister Kochuchira said she finds humanity “very much alive” in the camps. “The calamity has made the poor and the rich … eat, sleep and spend time together under one roof.”

Saji Thomas is a freelance journalist based in Bhopal, India. This article is part of a collaboration between Global Sisters Report and Matters India, a news portal that focuses on religious and social issues.

NEXT: Bishops from Argentina join Spain and Peru in voicing support for pope