Eucharist is a taste of heaven on earth, pope says 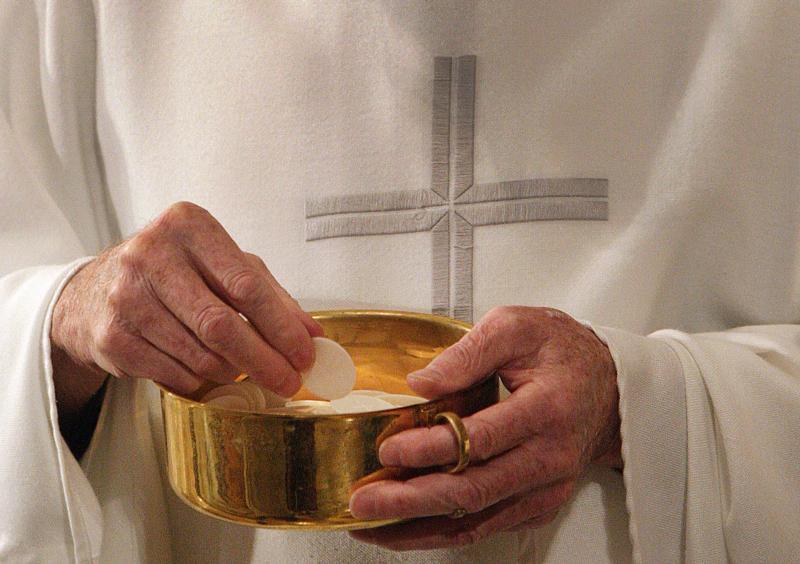 A priest prepares to distribute Communion during Mass in Washington. By receiving the Eucharist at Mass, Christians are given Christ’s same spirit and a taste of eternal life, Pope Francis said Aug. 19 during the Angelus. (CNS photo/Bob Roller)

VATICAN CITY (CNS) — By receiving the Eucharist at Mass, Christians are given Christ’s same spirit and a taste of eternal life, Pope Francis said.

“Every time that we participate in the Holy Mass, we hasten heaven on earth in a certain sense because from the eucharistic food — the body and blood of Christ — we learn what eternal life is,” the pope said Aug. 19 during his Angelus address.

After praying the Angelus prayer with pilgrims in St. Peter’s Square, the pope led them in praying for the victims of massive flooding caused by monsoon rains in the Indian state of Kerala.

According to the BBC, more than 350 people have died while thousands more are still trapped and awaiting rescue.

In his main address, Pope Francis reflected on the Sunday Gospel reading in which Jesus tells the crowd that “whoever eats my flesh and drinks my blood has eternal life.”

The Eucharist, the pope said, is where Christians find “that which spiritually feeds us and quenches our thirst today and for eternity.”

“Happiness and eternity of life depend on our capacity for making the evangelical love we received in the Eucharist fruitful,” he said.

Resistance to allowing oneself to be nourished by Jesus’ body and blood, he said, is seen “when we struggle to model our existence to that of Jesus, to act according to his standards and not according to the standards of the world.”

PREVIOUS: Letter of His Holiness Pope Francis to the People of God

NEXT: ‘We didn’t have food,’ say Venezuelan families at Colombian shelter