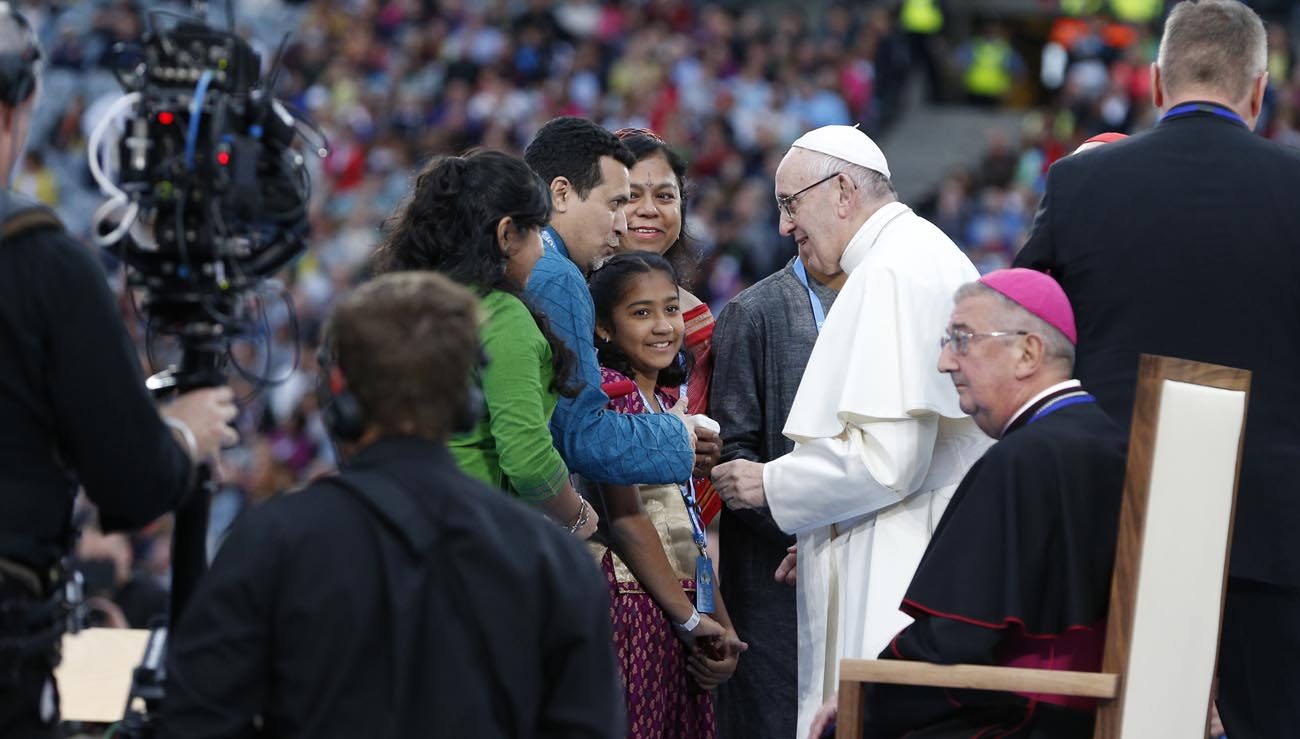 Pope Francis meets with a family that gave testimony during the Festival of Families in Croke Park stadium in Dublin Aug. 25. (CNS photo/Paul Haring)

DUBLIN (CNS) — In a stadium of Catholic families from around the world, Pope Francis told the laypeople they are the vast majority of church members and that, without them, the church would be cold, a collection of statues.

“God wants every family to be a beacon of joy of his love to our world,” the pope said Aug. 25, celebrating the Festival of Families in Dublin’s Croke Park Stadium.

The Irish dance troupe Riverdance thrilled the crowd and brought a big smile to Pope Francis’ face. “The Priests,” a classical Irish trio of priests, performed, as did Nathan Carter, an Irish country singer, and tenor Andrea Bocelli.

Families from India, Canada, Iraq, Ireland and Burkina Faso stood on stage near the pope while pre-recorded video versions of their testimonies played.

The Canadian couple, Marissa and Aldo d’Andrea of Toronto, spoke about their 54 years of marriage, their four children and 13 grandchildren — and one on the way.

The Iraqi couple, Enass and Sarmaad Mekhael, are refugees living in Australia. Enass’ brother was Father Ragheed Aziz Ganni, a 35-year-old Chaldean Catholic priest murdered in 2007 at a parish in Mosul, Iraq.

The families, who have faced joys and heartache and have held on to each other and to their faith, are models of how each Catholic family is called to give a witness in the world to the love of God, the pope said.

“That is what holiness is all about,” he said. “I like to speak of the saints next door, all those ordinary people who reflect God’s presence in the life and history of the world.”

Pope Francis insisted, “The vocation to love and to holiness is not something reserved for a privileged few,” but is a call that comes with baptism.

One key aspect of God’s love is God’s willingness to forgive, and that is an essential part of family life, too, the pope said.

Every family experiences tensions and arguments, the pope said, but “sometimes you are angry and tempted to sleep in another room — alone and apart — but just knock on the door and say: ‘Please, can I come in?’ All it takes is a look, a kiss, a sweet word and everything returns to normal.”

Pope Francis said the stories shared by the couples clearly show the strength and power that come from faith and from the grace of sacramental marriage.

“The love of Christ that renews all things is what makes possible marriage and a conjugal love marked by fidelity, indissolubility, unity and openness to life,” he said. “God — Father, Son and Holy Spirit — created mankind in his image to share in his love, to be a family of families and to enjoy the peace that he alone can give.”

Many seats in the stadium remained empty. Years of revelations of the extent of decades of physical, sexual and emotional abuse by church officials and their long-delayed response to the problem have devastated Irish Catholics, sent church attendance plummeting and contributed strongly to the waning influence of the Irish hierarchy in public discourse.

Earlier in the day, Pope Francis spent 90 minutes meeting privately with eight survivors of the abuse. One survivor, Father Patrick McCafferty, tweeted that it was “an excellent meeting in every respect.”

“I think all this with the abuse is taking its toll,” said Laura Egan of Dublin, who attended the Croke Park event. “I came to see the last pope in 1979. Pope Francis is a wonderful man. I do think he can bring the church through this abuse scandal, but it’s those in the Vatican who need to do something about it. That insider circle has a lot of power. I think Francis can make that happen.”

Paul Doherty, 53, a security guard from County Meath, told Catholic News Service, “the faith is still strong here, but this is a very different Ireland from the one Pope John Paul II visited. Hopefully this will strengthen the faith here.

Doherty, a eucharistic minister in his parish, added: “The church in Ireland needs new life, new thinking. We need to let the people speak — about divorce, marriage, abortion, same-sex marriage. The people of Ireland have a voice. And they’re using their voice.”

Contributing to this story was Gina Christian.

NEXT: At Knock shrine, pope again begs forgiveness for betrayal of abuse