From sot to saint: Matt Talbot gives hope for recovery from addiction 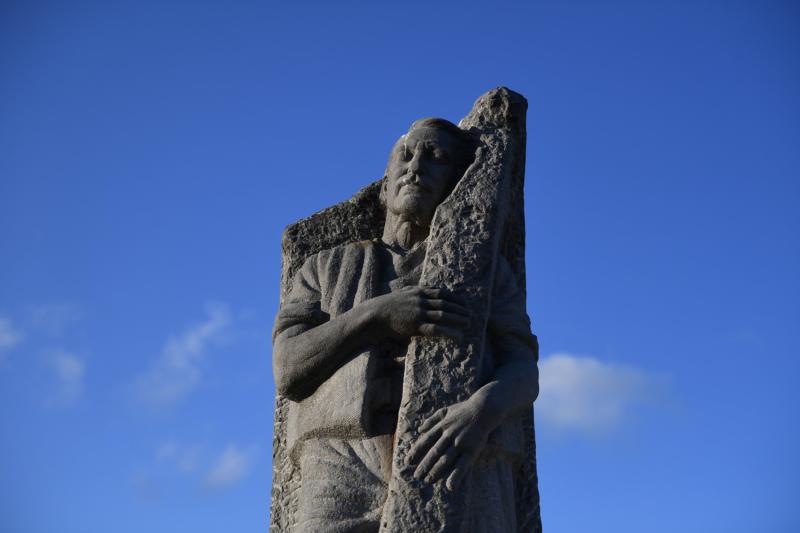 A statue of Matt Talbot is seen in Dublin Aug. 24. Talbot, a 19th-century Irish laborer and saint-in-the-making, could be a new role model for those seeking freedom from addiction. (CNS photo/Clodagh Kilcoyne, Reuters)

DUBLIN (CNS) — A 19th-century Irish laborer and saint-in-the-making could be a new role model for those seeking freedom from addiction, according to a growing apostolate led by a Dublin priest.

At an Aug. 23 presentation during the World Meeting of Families, Father Brian Lawless described how Venerable Matt Talbot, once a hard-drinking warehouse hand, was transformed into a sober “urban mystic” through his Catholic faith.

More than 60 attendees listened as Father Lawless surveyed Talbot’s life as an obscure and impoverished worker in Dublin’s slums, which ranked among the worst in Europe at the time.

Talbot’s visibility grew Aug. 25 when Pope Francis made a special point of stopping at Our Lady of Lourdes Church to pray before some relics of Talbot.

Born in 1856, Talbot was the second-eldest of 10 children who survived out of 12. Largely uneducated, he began working at age 12 for a company that bottled Guinness beer. Talbot took to sampling the product, a common practice among the other child laborers. By age 16, he also started drinking whiskey, and he spent the next 12 years as an alcoholic.

“Every penny that he earned was used to buy alcohol,” said Father Lawless.

At age 28, Talbot had “a conversion experience,” something shared by many in addiction recovery who “come to a realization that something has to change,” Father Lawless said.

For Talbot, the breaking point came after a week of unemployment left him penniless and unable to buy a drink. Realizing that “his future looked as bleak as his past,” said Father Lawless, Talbot decided to “take the pledge” and commit to a three-month period of abstinence, a common practice encouraged by temperance movements of the day.

Yet Talbot quickly realized that sobriety was not a matter of having an iron will. Suffering from alcohol withdrawal a few days after abstaining, he went into a church and acknowledged in prayer that only God’s grace could sustain him.

“He emptied himself,” said Father Lawless, adding that addiction is an effort to fill “a hole in the soul” that can only be completed by God.

Talbot embraced the Catholic faith in which he had been raised, attending daily Mass and eventually finding a spiritual director. Barely literate, he learned to read and write so that he could explore the Scriptures, the lives of the saints and spiritual writings.

Having been introduced to Irish monasticism, Talbot adopted an austere lifestyle, remaining single while caring for his elderly mother and supporting numerous charities with any funds left over from his meager income. He spent hours in prayer and reflection, often seemingly in ecstasy.

Having read the works of St. Louis de Montfort, Talbot developed an intense devotion to Mary, even wearing chains around his wrist, hand and right knee.

In his talk, Father Lawless clarified that the fetters were not “a sign of penance, but of Talbot’s consecration to Our Lady,” and were in keeping with St. Louis’ recommendation to wear “little chains” as a sign of surrender to Mary.

Actual chains worn by Talbot, along with several relics, were displayed at an exhibit staffed by volunteers from his apostolate during the pastoral congress of the World Meeting of Families.

Although he spent his life in gritty, working-class conditions, Talbot cultivated a spirituality often associated with hermits or other contemplatives.

“He was able to have those same kind of experiences in his little flat,” said Father Lawless.

A secular Franciscan, Talbot died in 1925 while on the way to Mass, closing his eyes just as the church bells rang.

His cause for canonization began almost immediately. Pope Paul VI declared Talbot venerable in 1975, and Pope John Paul II expressed support for Talbot’s canonization, although he was unable to stop at the would-be saint’s shrine in Our Lady of Lourdes Church during a 1979 visit to Ireland.

Any miracles in support of Talbot’s canonization would have to be “medical in nature,” said Father Lawless, since recovery from addiction often involves relapses that would disqualify such healings from consideration.

Nevertheless, Talbot remains a powerful intercessor for those longing for liberation from alcohol and drugs.

Michael Murphy, an addictions counselor from Drogheda, Ireland, and an advocate for Talbot’s canonization, followed Father Lawless’ presentation with a talk on how the humble laborer had profoundly shaped Murphy’s own journey to sobriety.

A successful executive for a multinational company, Murphy entered an alcohol treatment program in 1996 after a three-day blackout. Married and with children, he had at one point contemplated suicide after a long battle with the bottle.

“I even had a loaded gun ready,” he said.

Before Murphy entered rehab, his wife Noeleen had given him a copy of St. Faustina’s diary with a Matt Talbot prayer card tucked inside. After buried memories of his father’s sudden death surfaced during treatment, he angrily threw his travel bag across the room, causing the prayer card to fall before him.

“I looked at it, and I said to Matt Talbot, ‘If you’re as good as you’re supposed to be, keep me here in this program,'” Murphy said.

Murphy stayed, and after completing treatment he began rebuilding his life, looking to Talbot as a model of “hope, light and forgiveness.”

“He taught me to pray, how to go to eucharistic adoration,” Murphy said.

Both Father Lawless and Murphy noted that Talbot’s spiritual approach to sobriety prefigured the 12-step approach to recovery later formulated by Alcoholics Anonymous.

“He was preaching the 12 steps 50 years before AA,” said Murphy.

Like her husband, Noeleen Murphy is fervent in her devotion to Matt Talbot, even writing and recording “In Your Presence, Lord,” a hymn in Talbot’s honor.

“Anybody who asks will receive from Matt Talbot,” she said. “He walked the walk; he was in addiction himself. He knows the pain and suffering. And he lived in Christ’s presence.”

NEXT: Pope meets survivors of abuse in Ireland