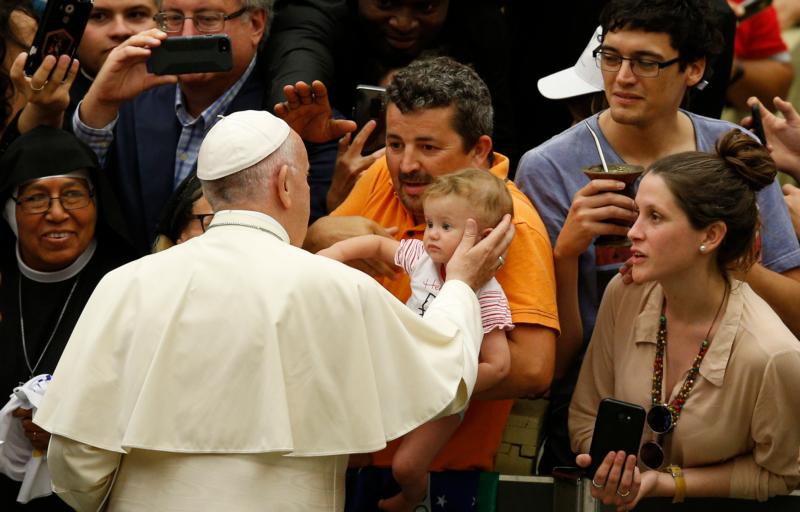 Pope Francis greets a baby during his general audience in Paul VI hall at the Vatican Aug. 1. (CNS photo/Paul Haring)

VATICAN CITY (CNS) — Idolatry is a human inclination that spares neither believers nor atheists and deprives people of life and love in exchange for slavery to unfulfilled dreams, Pope Francis said.

Although wealth, fame, beauty and power differ from the idols of ancient times, they all require “a human sacrifice,” the pope said Aug. 1 during his weekly general audience.

“For a career, children are sacrificed (by) neglecting them or simply not having them,” he said. “Beauty demands human sacrifice. How many hours are spent in front of the mirror?”

After a month’s summer break and as temperatures in the Eternal City reached nearly 95 degrees, the pope resumed his audiences inside the air-conditioned Paul VI audience hall.

Returning to his series of audience talks about the Ten Commandments, Pope Francis focused specifically on the command “You shall not have other gods beside me.”

Christians, like anyone else, can fall prey to the world’s “supermarket of idols,” relying on earthly goods rather than on the spiritual goods offered by God through prayer, the pope said.

Setting aside his prepared text, Pope Francis talked about walking near a park in his native Argentina and seeing perhaps 50 tables set up where people could have their fortunes told through tarot card readings.

“They went there to ‘pray’ to their idol,” the pope said. Instead of praying to God, people went to have their cards read and their futures foretold. “This is an idolatry!”

Over time, the pope continued, a person’s idol evolves into a “fixation and obsession” that has the power to enslave.

Pope Francis said the first “step on the path of love” is to recognize one’s own idolatries because “to truly love, you must be free of idols.”

“Carry this in your heart: Idols rob us of love, idols make us blind to love,” the pope said. Ask yourselves, ‘What is my idol?’ Then take it and throw it out the window.”