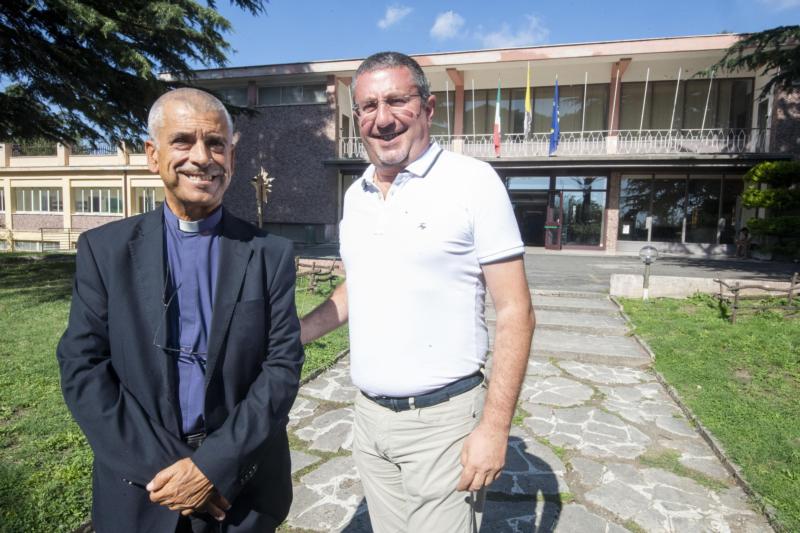 Msgr. Francesco Antonio Soddu, head of Caritas Italy, and Angelo Chiorazzo, founder of Auxilium, pose for photographers outside the Catholic Church center “Mondo Migliore” Aug. 27 in Rocca di Papa, Italy. Most of the nearly 200 migrants held for several days on the Italian coast guard ship Diciotti in the port of Catania will be hosted at the center. (CNS photo/Claudio Peri, EPA)

ROME (CNS) — One hundred migrants, most from Eritrea, arrived at a Catholic-run center near Rome late Aug. 28 after officials from the Italian bishops’ conference negotiated their release from an Italian coast guard ship.

They had been on the ship, the Diciotti, for 11 days.

The Italian coast guard rescued some 180 migrants from an overcrowded boat at sea Aug. 15, but Italy’s interior minister, Matteo Salvini, refused to allow them to enter Italy. Eventually 13 were taken to Lampedusa for medical treatment.

The boat docked in Catania, Italy, Aug. 20 and Salvini still refused to allow the migrants off the boat, insisting that other countries in the European Union had an obligation to share the burden of caring for them. Under intense international pressure, he allowed the 27 unaccompanied minors aboard to disembark Aug. 22.

Then late Aug. 25, Salvini tweeted, “After so much hard work, insults, threats and inquiries, we finally have the solution for the ship Diciotti.”

Ireland and Albania each agreed to take 20 of the migrants; the Catholic Church in Italy offered to take the remaining 100.

Returning to Rome from Ireland Aug. 26, Pope Francis said he was not involved in the negotiations, although he obviously had been regularly informed. He credited Father Aldo Buonaiuto, who works with people rescued from human trafficking, and Father Ivan Maffeis, one of the undersecretaries of the Italian bishops’ conference.

Pope Francis told reporters that to “welcome the migrant, the stranger,” is a mandate as old as the Bible. “It is a moral principle.”

But, he said, for nations that must be done intelligently and with a plan for integrating the newcomers, particularly by teaching them the local language, customs and laws.

“The virtue of prudence,” he said, is “the virtue of governance,” explaining that a nation must be open to welcoming and helping migrants, but it also has to be realistic about the number of people it can absorb and the resources that will be needed to assist them as they get on their feet.

Domenico Alagia, director of Mondo Migliore, the church-run reception center where most of the Diciotti passengers were taken, said the center will provide them with medical care, psychological assistance and offer them a brief introduction to Italy.

Speaking to the Italian bishops’ news agency, SIR, Alagia said the migrants would remain at the center in Rocca di Papa only a few days before moving on to a variety of Italian dioceses where the local Caritas organizations would help them settle and learn the language.

NEXT: Lebanon’s religious leaders call for ‘dignified’ return of refugees