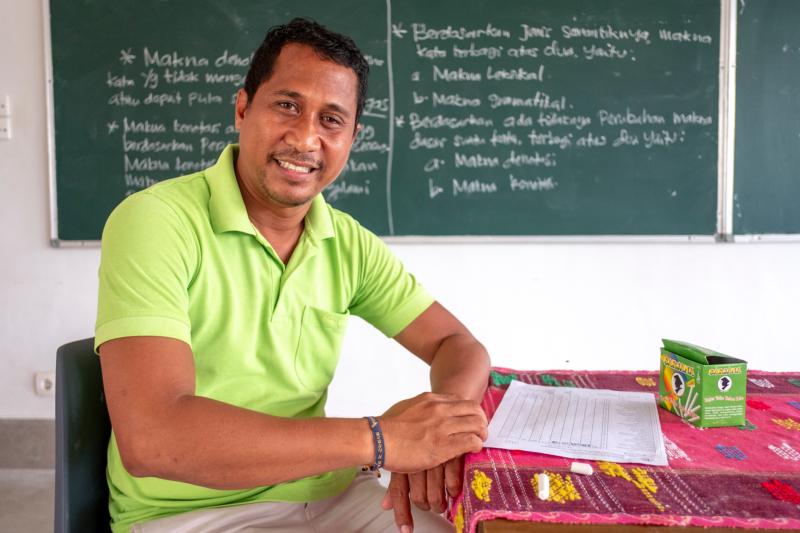 Egidio Lay Carvalho, an ex-soldier and now part-time teacher, poses for a photo in late January at St Ignatius Loyola College in Dili. Carvalho was recruited in 2013 by the Jesuits to work at the college to do maintenance work using the skills he learned in Malaysia, and now helps instruct classes. (CNS photo/Michael Coyne)

Egidio Lay Carvalho, an ex-soldier and now part-time teacher, poses for a photo in late January at St Ignatius Loyola College in Dili. Carvalho was recruited in 2013 by the Jesuits to work at the college to do maintenance work using the skills he learned in Malaysia, and now helps instruct classes. (CNS photo/Michael Coyne)

DILI, East Timor (CNS) — At 24 in late 2006, Egidio Lay Carvalho, a ragged and disgraced ex-soldier lay, miserable in Becora Prison and began to take stock of his life.

Like most of his countrymen, Carvalho was nominally a Catholic because of centuries of Portuguese occupation; Dominican friars had established a mission on the island by 1556.

But, he said, “back then, when I came to prison, I was not a religious man.”

Carvalho had joined the army in 2004 on his return from a stint in the Malaysian construction sector. However, more than two years later he was imprisoned on three charges, including assault, for his part in an attempted coup following a tumultuous six-month conflict in the then-fledgling country that had achieved independence four years earlier.

“I regretted joining the army, they didn’t look after us and the low pay was not worth risks. It was easy to be lead astray,” he recalled to Catholic News Service. “I started looking for something else.”

“The priests … opened my mind to the world,” he said. “I still regret joining the army, but I appreciated my years spent in the prison as that brought me to my conversion.”

It was a conversion that made his Catholic faith central in his life.

“Prison taught me to be more religious, it taught me how to be in touch with my longing for God,” said Carvalho, now 36 and widely known by the nickname Gil.

Carvalho said his connection to God following his release was so strong he briefly “contemplated the religious life,” but then he met the woman who would become his wife.

So instead of heading to the seminary, Carvalho was recruited by the Jesuits to work at their St. John’s College to do maintenance work using the skills he learned in Malaysia. In time, he began working with the young people at the school.

“This brought out the father in me. Even now people sometimes think I am a priest,” said the father of two young boys of his own.

When the Jesuits opened the doors of a new school, St. Ignatius Loyola College, they brought Carvalho along. The school sits on the outskirts of Dili; a huddle of single-storied, whitewashed buildings with covered walkways, courtyards designed to ward off the year-round heat and cope with the wet season.

Carvalho was at the new school from day one in 2013 and now helps instruct classes. In a way, his work is a vocation.

He sings the praises of the Jesuit education system, because “it also looks after spiritual, personal, character and disciplinary areas for students.” He welcomed that the school also extends “some formation of teaching and non-teaching staff.”

“One of the things about this school is that, because of the varied family backgrounds, the students have taught the teachers to be more attentive and sensitive to the kids’ personal problems — and our own,” Carvalho told CNS.

“I take pride in this first batch of students from this Jesuit school who will graduate (in December) this year. We can consider them the first alumni who have been formed by this school.”

Twelve years, ago Carvalho wanted to be a hero by changing his country violently. These days he finds himself as a different kind of hero to the young men and women at St Ignatius, especially those that started, with him, at the school five years ago.

“For me teacher Gil is a real inspiration. He has a lot of experience,” said Ivo, a former junior high school student council leader who will graduate Dec. 23.

“He is one of the ex-soldiers. Now he is a teacher. He inspired me because he gave me motivation for how to be a good leader and who to influence people, Ivo continued. “He was sent to prison and in prison for number of years. But now he covers for teachers who are not here, goes into the class and mentors students.”

In Carvalho’s view, the school “opens the minds of the students to think of life beyond themselves, not to think only about themselves but to think of how they can help people.”

“In the future they should contribute a lot to the future of this country.”

NEXT: Small Indian state of Goa has large impact on Catholic Church in Asia