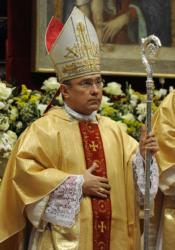 VATICAN CITY (CNS) — Pope Francis has named a Venezuelan veteran of the Vatican diplomatic corps to be the third-ranking official in the Vatican Secretariat of State.

Archbishop Edgar Pena Parra, current nuncio to Mozambique, will take up his new position as “substitute secretary for general affairs” Oct. 15, the Vatican announced Aug. 15. The position is similar to a president’s chief of staff, placing him in charge of the Vatican’s day-to-day operations.

Born in Maracaibo, Venezuela, he was ordained to the priesthood in 1985. After earning a degree in canon law, he entered the Vatican diplomatic corps in 1993, serving at Vatican missions in Kenya, Yugoslavia, at the United Nations in Geneva, in South Africa, Honduras and Mexico.

Retired Pope Benedict XVI named him an archbishop in 2011 and sent him to Pakistan as apostolic nuncio there. Pope Francis named him nuncio to Mozambique in 2015.

According to the Vatican, he speaks Spanish, Italian, English, French, Portuguese and Serbo-Croatian.

PREVIOUS: On Assumption feast, pope asks consolation for all who suffer